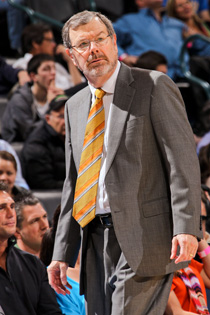 No matter how long one has been a fan, how well they may know a sport, nobody is completely immune to that most common pitfall of fandom; the inability to view a season as a whole, as opposed to a single game or small sample size. Any perennial Playoff contender can plummet through our all-knowing power rankings with a bad week of play at any given time during a season.

It seems unfair, but the possibility exists because there will always be someone else on the come up, ready to take hold of the spot that the incumbent all of a sudden does not deserve. Coaches and players being hired and fired on emotionally charged whims and general chaos consuming an organization is exactly why no fan should run a front office.

Enter the Brooklyn Nets, a team that has just spent a considerable fortune in time, money and planning to completely re-brand itself for, in large part, a new fan base.

The team traded New Jersey for Brooklyn, turned over most of its roster, save for its key players, and spared no expense to make sure the world knew its efforts. One of the few things that didn’t change about the Nets was their head coach, Avery Johnson. After a fast 11-4 start, Johnson found himself named NBA Coach of the Month, and the New York Knicks had (un)officially been put on notice that the number one spot in the city was up for grabs.

Then the losing began—11-4 was followed by 3-10, and all of a sudden the new fans weren’t packing Barclays Center quite to the brim anymore. The “Brook-lyn” chants lost a decibel or two, and ownership saw an investment in danger. So the top brass, those minds that bear the burden of remaining level-headed through periods of turmoil, made the decision that had surely crossed the minds of disheartened Nets fans all over Brooklyn. Just like that, down went Avery.

Hired as an assistant by Johnson in December of 2011, Carlesimo was part of that last season in Jersey and the hyped-up move to Brooklyn. He sat inconspicuously on the bench and watched as Avery Johnson’s promising start to the season went awry. It was a road that Carlesimo, a basketball lifer who has served as both head and assistant coach in college and the pros, had been down himself multiple times before.

Carlesimo carved out a pretty nice career for himself as a leader of boys in the college ranks. He had a 14-year run at Seton Hall; he even took them to the NCAA Championship in 1989, where they fell in controversial fashion to Michigan. That tenure only ended when Paul Allan and the Portland Trail Blazers lured Carlesimo into the NBA. Three 40-plus-win seasons and three Playoff appearances (but no series victories) later, Carlesimo was let go and moved on to Golden State. The Warriors didn’t do much winning during his time; people really only remember that marriage for Latrel Sprewell’s assault of his then-head coach.

Carlesimo was an assistant coach to Greg Popovich during the last three of the San Antonio Spurs Championship seasons. Carlesimo was the last coach of the first edition of the Seattle SuperSonics, but 13 games and one win into OKC’s maiden season, Scott Brooks took over just in time to take off with Kevin Durant. Suffice to say, Carlesimo has been through his share of war. The postmortem findings on his early head coaching days were well documented, and even his current players know their new head coach’s old reputation.

“He probably got a knock on him for some of the things that went down with Sprewell; some things will always follow you. He kind of had a reputation as a dictator. That works well in the college ranks, but when you get the League and you’re dealing with grown men, you have to try to learn to balance that coach/player relationship a little bit. I think he’s learned that,” said Nets veteran guard Jerry Stackhouse, as he compared what he now knows about his head coach with what he’d “heard and read” before he ever had a chance to find out for himself.

“I never really had any close dealings with [Carlesimo] until I played for him. We all make mistakes early on. We are human. The ones who are able to stick around and last awhile are the ones that learn from those experiences, the ones that can adjust and alter their interactions with others,” Stackhouse said.

Through it all, Carlesimo still hasn’t lost his passion for coaching basketball.

“I still love what I do,” he said. “And think about it? How many people really can say that? We all talk to a lot of people in our lives and they get talking about their jobs and you ask them if they love it and too many say, ‘Not really.’ I love coaching. I am still getting up in the morning and doing something that I want to do.” Carlesimo said.

Carlesimo was ready when he was called upon to take over the head coaching duties. The team has obviously responded to his message, whatever it is or however different it is from Avery Johnson’s. The difference in their play since his hiring is clear as day. What is unclear is the cause of that difference.

“He didn’t try to come in and shake everything up, he kept a lot of things the same so there wouldn’t be much culture shock for guys, but at the same time he tweaked some things, and for whatever reason we responded and won some games since then,” Stackhouse said.

So then is it Carlesimo, or some other mitigating factor? Did Avery Johnson’s firing finally wake Deron Williams up? Since December 27, the day of Johnson’s dismissal, Williams has played at the level we are accustomed to seeing him perform at, averaging 18-plus a game and shooting above 40 percent from the floor.

Realistically speaking, it’s likely a combination of the two more so than one event causing the other. What is undeniable is the calming presence that Carlesimo is sporting these days, and the effect that his personality is having on his team. The new trait, according to Stackhouse, was obvious to the team after San Antonio walloped Brooklyn back on New Year’s Eve. A matchup against the Thunder loomed on the other side of the evening’s festivities.

“That Oklahoma City game was our next game, just after New Year’s. We could have half-assed that practice before it but he got us after it, and we came out and performed at game time. The things we needed to do to be successful were fresh in our mind; we executed, and we were successful that night,” Stackhouse said.

“He’s becoming a better loser. He doesn’t beat himself or us over the top when we lose stomping and yelling at the things we did wrong (like he did). Sometimes, we need that. Generally though, his growth, to be a little more even-kneeled, it shows,” Stackhouse said.

Under Carlesimo, Seton Hall should have won the National Championship and didn’t because of one of the worst and dumbest calls in Final Four history. He sat next to Chuck Daly when Daly coached the Dream Team in Barcelona, was assaulted by Latrell Sprewell, sat next to Gregg Popovich during San Antonio’s dynasty, and got fired in Oklahoma City with a young Kevin Durant on the floor.

The head coach of the Brooklyn Nets is a much different man than the one who led those past incarnations of the Blazers, Warriors and Thunder. He as been humbled, he has matured, and he has grown. All of those experiences of both bliss and pain have created the head coach of this year’s Brooklyn team. The Nets had themselves a good head coach in Avery Johnson. Firing the leader of a team in the early season is hardly ever ideal, but the Nets had the right man on the bench to step up.

“I will always be grateful to Avery, because he gave me the opportunity to come back [here] to the metropolitan area,” Carlesimo said.

Carlesimo also understands full well the position that he finds himself in. He and the team that he commands have a chance to do something special this year. “I have to tell you, after all my years of doing this, I am astounded at the reception we’ve gotten in Brooklyn, the way this thing has taken hold. Man, a lot has happened in a year.”