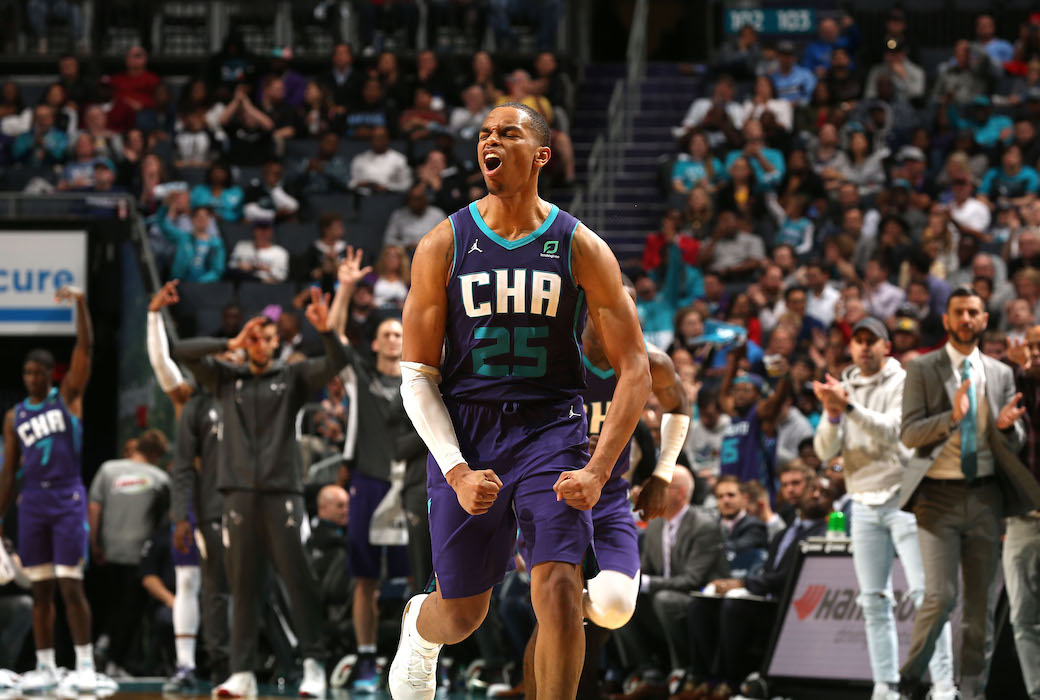 PJ Washington had an opening night performance he’ll never forget. Washington, the Hornets’ No. 12 pick, put up 27 points against the Bulls at the Spectrum Center, making it the most points scored for a Hornet in his career debut. En route to a 126-125 win, the rookie hit 7 three-pointers—also the most by a player making his debut.

Through six games, Washington is averaging 15 ppg and 6.7 rpg. We caught up with the 21-year-old to talk about life in the NBA, his opening night performance, video games and more.

SLAM: I know you’re five games into the season, but let’s take it back to draft night. What was that feeling like hearing Adam Silver call your name?

PJ Washington: I was sitting at the table and when you’re in the green room, you kind of know who the camera’s going to that person. I looked up, Adam Silver was walking to the stage and all the cameras were in my face, so I was like now’s the time. I was excited, I heard my name get called [and] I couldn’t really say much. I hugged my family, hugged Coach Cal, dapped up my teammates Tyler Herro and Keldon Johnson. I went on stage and was just excited—a lot of smiles and emotions from that night.

SLAM: How’s the NBA life been for you since then?

PJW: It’s been great. Everything’s been moving fast. A lot of travel and loving every bit of it. I get to follow my teammates, play video games a lot, listen to music and try to do a lot of other things to keep my mind off the court.

SLAM: You showed out in your debut scoring 27 against the Bulls. Walk me through what’s going through your mind when you see the first 3 three-pointers go in?

PJW: When I hit the first three [shots], man, I don’t even know how to describe it. It just felt good to finally be in an NBA game and make a shot. And then… once I seen a couple fall, I tried to keep being aggressive on both ends and whenever I had an open shot, I’d take it with confidence.

SLAM: What are some goals you’ve set out for yourself this season?

PJW: I want to win as much games as possible and be able to contribute on both ends. I want to average at least 8 rebounds and score at least 15 points. I gotta be out there on the court not fouling and be in my right mind to be able to guard on the defensive end. And eventually win Rookie of the Year.

SLAM: Tim Martin is someone you’ve been working with for a minute. How’s he helped you expand your game?

PJW: I’ve been working with Tim since I was a freshman in high school. We’ve been working on the basics—mechanics since day one—and trying to master that. I feel like that’s been a big reason why I’m making shots and why my confidence is up since working with him. He works on all the little things to make me better, helping me get better at watching film and just off the court like chilling and trying to get our minds off basketball.

SLAM: I know you said you’re a big gamer. What are your go-to games you’re playing on off days?

PJW: I play a lot of 2K, Call of Duty, Madden, Fortnite—pretty much anything, honestly.

SLAM: Who’s the best gamer on the team?

SLAM: Would you say you’re the best gamer in terms of all rookies too?

PJW: Oh yeah, without a doubt.

SLAM: Have you found any favorite food spots in Charlotte?

PJW: Not yet. Everybody’s been telling me there’s a lot of good food places, but they can never give me names, so I’m always confused. I don’t know where to go, so I just have to look into that a little bit more.