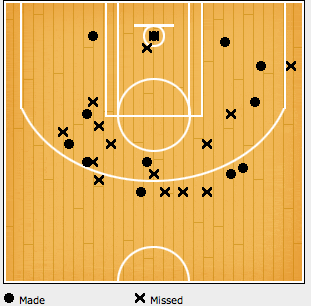 There were three games played, and the losers of two of them featured some of the more thinned out rosters around the league. The Bucks were without Michael Redd, lost Mo Williams during the game, and Charlie V and Bobby Simmons haven’t been playing. The Hornets are missing Chris Paul, Peja, David West, etc. and lost to the Clippers.

The Rockets don’t have Yao, and Tracy McGrady has taken this opportunity to raise his scoring every night. He’s shooting more than Gilbert Arenas lately, and this game the results were 31 points on 14 of 29 shooting, with 8 assists and 6 boards. 2 of 7 from three, 1 of 2 from the line. He still doesn’t trust his body to be able to take hits when he goes to the basket, hence the all-perimeter game. Check the shot chart. It’s not like he can’t do it. He’s been getting to the line fairly regularly lately. Guess there’s no need to push it when you can score 31 without it. And maybe the presence of Ben Wallace had something to do with it. T-mac, player of the D.A.Y.