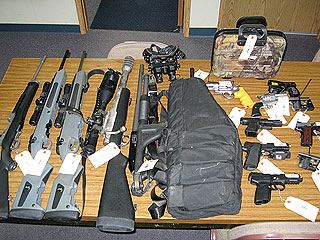 Getting this out of the way early today because I want to combine it with something funny. First of all the Player of the D.A.Y. is LeBron. Again. He was the invisible man for the first half of the year and now he’s picking up Player of the D.A.Y.s left and right. He’s on a Baron Davis-esque tear. Last night the Pistons felt the pain of a fully operational LeBron James. Honorable mention to Shaquille O’Neal, who is back in a B.I.G. way.
Moving on…

There are times when NBA players are found with guns, and it becomes a big social indictment of the league and all that is wrong with the world and so on. Then there are times when it is someone that is not in the NBA that is found with a ridiculous amount of guns, and it reflects on them as an individual. This is one of those times to laugh at somebody who was driving around with a whole militia full of weaponry in his car. Check out this photo:

These are the property of John Popper from Blues Traveler. I am impressed. Didn’t know Blues Traveller was in the streets like that. Now I do. Obviously the pop-blues jam bands in this country are out of control and their commisioner needs to step in. We need columnists from coast to coast arguing with each other about the epidemic of pop-blues jam bands and their violence. Think of the children they influence! You are a role model John Popper! Don’t let me find out that your harmonica is secretly a spitball gun. By the way those are infared goggles next to that camo briefcase (camo briefcase?). Blues Traveller is ready for war. Now I know why they call him Popper. If he was in Vegas over All-Star, there would be no witnesses.