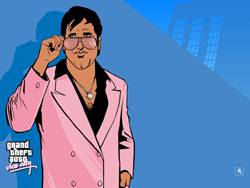 A little anecdote or story before I get into the award. I was just at the local Best Buy, purchasing blank video tapes. As I was leaving, I observed a mass of humanity in the form of a line. Some of them had been standing in line since Tuesday. Playstation 3 is here as of tomorrow at 10 AM. Now, if you know the writings of Sam Rubenstein, you know that I am a grown a$$ man that spends too much time playing video games. But I do not wait in line for a video game. The last time I did that was for Vice City. I woke up at 4 A.M. and watched the first half of Scarface (for the 80th time) to get ready. Then I walked to my local Gamestop and picked up my pre-reserved copy. I was 24 years old and “underemployed” at the time if memory serves correct. After hanging out at the store with my new friends, high school kids and creepy 30 year olds, I went home and played it for about 15 hours straight.

I just don’t have that kind of dedication anymore. Getting soft in my old age.

And now, for the player of the D.A.Y. I will tie it back in to that story. Back when Vice City was the greatest game in the history of gaming, Jason Kidd was without question the greatest point guard in the NBA. Maybe I might have argued for Stephon Marbury but well, we really don’t need to get back into that whole thing. Last night Jason proved that even on those old reconstructed knees, he can still get it done and win a game by himself. It’s not like Kidd has fallen off or anything. He still gets a triple double a week, but he’s not typically explosive and Vince is the guy that usually determines if the Nets win or lose. Also, in Vice City, a big part of the game is shooting. Jason was hitting shots last night, albeit with a basketball not guns.
I was tempted to give this to Adam Morrison for going off against the Spurs, but Emeka had such a great game that they really would have to split the trophy. So the winner is JASONKIDD! (and saying his name in bold like that is yet another flashback to 2002.)