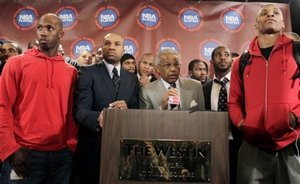 For the foreseeable future, the only court that matters for NBA basketball players, owners, fans, partners, and all other interested parties, is the courtroom.

As expected, players filed anti-trust lawsuits against the League’s team owners, looking to get favorable results by filing separately in Minnesota and California.

CBS Sports breaks it down:

NBA players sued the league alleging antitrust violations Tuesday, in part using commissioner David Stern’s own words against him in making their case that the lockout is illegal. With two antitrust actions — one in California naming superstars Carmelo Anthony and Kevin Durant among five plaintiffs, and another in Minnesota naming four plaintiffs — the players are seeking summary judgment and treble damages totaling three times the players’ lost wages due to what lead attorney David Boies referred to as an illegal group boycott.

The California case, filed Tuesday night in the Northern District, named plaintiffs who represent a wide array of players: Anthony, Durant and Chauncey Billups (high-paid stars); Leon Powe (a mid-level veteran); and Kawhi Leonard (a rookie). The plaintiffs in a similar case filed in Minnesota are Caron Butler, Ben Gordon, Anthony Tolliver and Derrick Williams. Boies said there could be other lawsuits, and at some point, they could be combined. It is possible, Boies said, that the players could get a summary judgment before the NBA cancels the entire season — essentially a two-month timeframe. By that point, with the clock starting on potential damages Tuesday — which was supposed to have been the first pay day of the season for the majority of players — treble damages could amount to $2.4 billion.

“We would hope that it’s not necessary to go to trial and get huge damages to bring them to a point where they are prepared to abide by the law,” Boies said.

Despite David Stern’s angry and dismissive remarks about the players’ shocking maneuver last week, the NBA and its lawyers will have no choice but to enter this legal battle, something they had hoped would never happen.