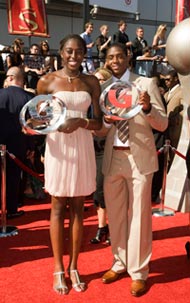 Los Angeles—When I met Brandon Knight last year at the Gatorade Athlete of the Year luncheon, he looked much different. He wore a dress shirt-and tie without a blazer to go with dress pants highlighted by a massive medical boot on his foot. He hadn’t cut his hair since the 4th grade, his long tight braids beautifully aligned and running down the back of his neck. He was a bit shy at first and I really had to work to get him to open up. I came to find out he really enjoyed mathematics so I joked that he would become the NBA’s version of A Beautiful Mind, a John Nash-type PG. He finally smiled.

Fast forward to a year later. Same luncheon. Brandon is back and ready for his close up. His hair has been cut nice and close and he’s rocking a lovely full suit that is perfectly tailored. His smile is big and rightfully so, as the Pine Crest High (Fort Lauderdale) star was named Gatorade National High School Athlete of the Year on Wednesday at the JW Marriot Hotel at L.A. Live.

Established in 1985, the Gatorade Player of the Year program annually recognizes one POY winner in the following sports: football, volleyball, cross country, soccer, basketball, baseball, softball and track & field. In 2003, the Gatorade High School AOY awards luncheon was established to identify and honor the nation’s top overall male and female high school athletes from among the 12 national players of the year selected during the high school athletic season. Last year, Brandon was invited as the male basketball winner, but lost out on the national award which went to Texas-bound quarterback Garrett Gilbert.

Always a first class affair, the luncheon had special meaning for the brand and former winners this year since it marked the 25th anniversary of the program. Held in a beautiful ballroom at the sparkling new JW Marriot, the event was hosted by ESPN’s Stuart Scott and featured several professional athletes in attendance: Kevin Love, Lisa Leslie, Brandi Chastain and Wes Welker. The brand also honored the company’s founder and historian of the program Bruce Weber, who created the concept for the company 25 years ago.

This year’s luncheon turned out to be a clean sweep for the basketball nominees, with Knight and

of Cy-Fair High in Cypress, TX bringing home the hardware. Ogwumike was presented her award by Leslie and Chastain and could barely contain her excitement. After the luncheon, she admitted that she was shocked to win. “I’m a person who tries to live it up and celebrate in the moment,” says Ogwumike, who dropped 23 points and 14 rebounds per game in leading the Bobcats to a 36-1 record and 5A state title this past season. “There are so many other great athletes here. The other nominees were just as talented. You hope to win and it happened to go my way.”

I told Chiney that SLAM writer and Houston native Maurice Bobb has been informing the world of her talents for quite some time. She knew and was very appreciative. “Maurice is really cool.”

As one of the most sought after talents in the recruiting game, Chiney acknowledged that the process was wild at times but easy to handle overall. In the end, she chose to team up with her sister Nneka at Stanford, excited about the wide range of opportunities the school can provide for her. “It just ended up that the right place for me athletically and academically was Stanford,” she says. “I’m lucky that my sister is there too.”

When I asked her to describe her game, there was no hesitation. “Aggressive,” she says proudly. “A lot of great players have a signature. A good shooter or someone great on the block post. I don’t know what I’m great at! I just play with passion and aggression. Finish and get the win, but don’t get caught up in the win. That’s me as a player.”

Stanford Coach Tara VanDerveer is going to love coaching Chiney. In addition to her incredible game, she has a wonderful personality and as a former student body president of her high school, she is determined to make a positive impact in the world.

Wherever she ends up, she surely will not forget her Texas roots. “We love our football but Texas also embraces so many other sports and gives you the opportunity to play at a young age,” she says. “One thing about Texas is if you have a passion there are ways to develop that. There are so many people that are sports fanatics that will support you. I just made it up the ladder playing basketball through AAU and things like that. That’s why I love Texas.”

Knight was presented his award by Love—who won Gatorade male AOY honors in 2007—and Welker. He joins a prestigious group of former basketball winners that include LeBron James, Dwight Howard and Greg Oden. At the podium, he thanked his family and Gatorade for establishing athletics, character and academics as the basis for the award. Knight maintained a 4.0 GPA in high school and seems to be just as competitive in the classroom as he is on the court. “If I don’t do well in school, I don’t feel good about myself,” says Knight, who posted per game averages of 32 points, 9 rebounds and 4 assists as a senior.

He says leaving his hometown was a major factor in deciding to get a haircut. “I’ve had one person do my hair all my life and that person is not coming to Kentucky with me,” he says with a smile. “I was very picky about them and less picky about a haircut.”

The luncheon also offered an opportunity to sit down with one of SLAM’s favorite peeps, Mr. Love. He looked fresh in a lovely black suit and there was a glow about him (that is what a summer in SoCal can do for a guy). Kevin’s been working hard this offseason, making time for yoga and getting some runs in with other ballers who workout in the area, cats like Russell Westbrook and Derrick Rose. We touched on a number of topics including Minnesota’s recent signing of former Oregon guard Luke Ridnour. “I used to watch him and Luke Jackson at Oregon do their work,” Love says. “Luc Mbah a Moute said I would love playing with him.”

We will post extended Q + As with Love, Knight and Leslie in the coming days. Many thanks to Gatorade and Bekah Lockner of Fleishman-Hillard Public Relations for the invite and all of their efforts in securing our interviews. Mahalo.