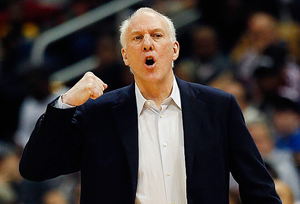 Having led the San Antonio Spurs to a NBA-best 62-20 record, an amazing season by any measure, Gregg Popovich was named the 2013-’14 Coach of the Year.

Pop joins Don Nelson and Pat Riley as the only three-time winners of the the Red Auerbach Trophy.

In his 18th season as head coach of the Spurs, Popovich guided San Antonio to a league-best 62-20 (.756) record, extending its streak of winning at least 50 games to an NBA record 15 consecutive seasons. The team posted an NBA-best 30-11 road record, the best road mark in franchise history and only the 13th time in NBA history a team has won 30 road games in a season.

San Antonio led the NBA in points per game differential at +7.8, having averaged 105.4 points per contest while giving up just 97.6. Popovich presided over a balanced roster which for the first time in NBA history featured no player who averaged 30-plus minutes, with Tony Parker’s 29.4 minutes per game leading that category. The Spurs used 30 different starting lineups throughout the season and were led in scoring by 11 different players.

San Antonio qualified for the Playoffs for the 17th consecutive season, the longest active streak and tied for fifth-longest in NBA history. Over that 17-year span, Popovich’s Spurs have had the best winning percentage at .706 (950-396).

Gregg Popovich also received the COY award following the 2002-03 and 2011-12 seasons. Somehow, it feels like he should have won it a few more times.