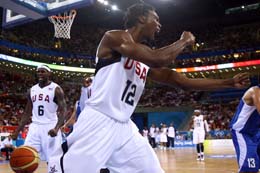 My friends, today I write to you from atop one of the highest peaks our national basketball program can have ever scaled.

First, we walloped the country of China, who in the next hundred years, will overtake us as the center of the human universe. But never, never will they beat us on the court.

Then, even more crucially, we regained our honor by dominating Greece, who so sadly demeaned us in the 2006 Worlds — when we had already convened this current bunch of recruits.

Greece is a nation best known for pissing-off Ras Kass in 1994, inventing the Olympics, and trying to steal LeBron away from us in 2010. A worthy foe, no doubt, but vanquished them we did. That particular monkey has been flung to the floor, and now, all we have to look forward to is decade upon decade of gold. Unless we play them again this summer, in which case we can hardly afford to rest on our laurels.

Chris Bosh: I take back everything I said about him playing in Canada, knowing how to use a computer, and wearing the same uniform as a bunch of our enemies in these Games. In what all available experts recognized as USA Basketball’s most over-hyped and self-serving challenge, Bosh made the politically savvy choice to insert himself into a headline bound to grab the attention of anyone who cares about this country’s honor.

Greece was all that we weren’t – graceful, honorable, played a zone, and sunk jump shots. So we kicked the crap out of them, and there was Bosh, stepping up to get his name forever associated with this country’s moment of absolute Redemption.

He even made it sound like the whole thing was his idea: “We knew if we got into them early, picked them up full court, we would kind of wear them down. In 2006 we just let them run their stuff, so we wanted to extend our defense and make them run their offense about 30 or 35 feet away from the basket.” Show and prove, Chris, show and prove. You are back in our hearts once again, and never will we forget you.

Coach K: Hey dude, what the eff is up with this?

When asked if Team USA is unbeatable, you said: “No, I do not think that. I don’t think any team in any sport is unbeatable because we’re all human beings and there is always some human being on that day or a group of human beings that can beat another group.”

My rec league team can’t beat the Celtics, even if we played every time for 10 million years. I don’t care if you’re soft, and want athletes to know about their feelings, crack the books, and be like sons to you as you teach them to be in your image. That’s fine for the NCAA, but there’s no reason for that put-on here, and if anything, it makes you look ugly, weak, puerile, and unwilling to use force when necessary.

For this nation to be strong, we have to go into every game, every summit, and every R. Kelly concert like we invented the sundial.

you on the medal stand, and that’s only so they can’t see your nose hair.

Carlos Boozer: So far, the biggest thing you’ve done in these Games is get a stupid nickname that embarrasses your family. Sucks for you.

But look, the more you get called “Evil Parrot Face”, or “Mangy Hobbit Helmet,” or “Brow Overdose On A Sunny Morning,” the dumber everyone in China looks. None of that makes any sense, even in Chinese!

At least LeBron and Kobe’s wacky Asian nicknames seem like bad translations, or t-shirts waiting to happen, or both. There’s really no conclusion to draw from “Bone Nose Foot Leg Leg” other than that, for all of China’s mounting geo-political power, they’re like ten thousands years behind us when it comes to using language. Which obviously means they shouldn’t get our jobs. How would you like to have your car made by some kid with a “Pickle Stone Fight Card” poster? What about your airline reservations? How will you ever get home?

Booze, make sure the people hear your pain, so they may be spared it in the future ahead.

The most important game of your lives, and you come with nothing. You call this pride? You expect us to believe you when we bring you in front of Congress fifteen years from now, when it comes out that this team could’ve won every game by 50 but went slack to save their knees?

You are all headed straight to Cuba, if you catch my drift.

And speaking of Cuba, your “what matters is getting the win” excuses won’t fly when HUAC II is up and running. THIS IS NOT CUBA. THIS IS NOT CHINA. THIS IS NOT PANAMA. WE PLAY TO WIN THE GAME, AND THE GAME IS LIFE, IN WHICH YOU EARN MONEY AND HAVE KIDS WHILE WORKING WELL WITH OTHERS.

You three are like only half-alive. I feel sorry for your families—I can only hope they take pity on you.

Don’t hesitate to pre-order FreeDarko’s book, the ideal way to enjoy the League and save money at the same time.