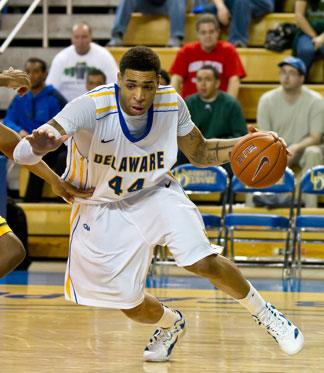 The Portsmouth Invitational Tournament has long served as a rite of passage for the top seniors in college basketball. Sixty-four of the nation’s top seniors are selected to participate in the camp and while over the past few years many of the elite seniors elect not to play, the event boasts alum such as John Stockton, Dennis Rodman, Tim Hardaway and Scottie Pippen.

Every year, there are seniors who slide under the radar throughout their college careers or who aren’t able to show their total arsenal in their school’s offense that shock NBA brass at the PIT. Last year, local product Kyle O’Quinn made the short ride from Norfolk State over and left with the MVP trophy. He supplanted himself as a sure fire draft pick and was even in the mix in the late first round before ultimately being selected in the second round by the Orlando Magic. In a day and age where many agents are worried about “damaging a player’s stock,” the PIT gives you a throwback feel of seniors who are fighting for their livelihood to get in the League.

My personal co-MVP of the tournament, Hagins dominated the game for stretches on both ends of the court. The 6-9 athlete dunked everything around the rim, displayed a soft touch out to 15 feet, and even busted out a few left hand hook shots. Defensively was where the Delaware product really made his presence felt, though. He exhibited great timing as a shot-blocker, rebounded the ball out of his area, and really got out to defend in space in pick and roll situations. At 6-9 and 230 pounds with a 7-1 wingspan, Jamelle has the ideal size that you look for in a power forward and will certainly be right there in the second round mix when the Draft rolls around in June.

The official MVP of the PIT (along with my personal co-MVP) was Brandon Davies, who was unstoppable en route to leading his team to the title. Most college fans remember Davies’ name for breaking the Mormon code by doing what we were all doing in college, resulting in a suspension during the Jimmer-crazed BYU days. Fast forward two years and the 6-10 post might be playing with Jimmer in the League. He was outstanding passing the ball from both from double teams and from the high post, scored in a plethora of ways on the block, and rebounded the ball like a mad man. Equally as impressive was the fact that he was a vocal leader, seemed to love setting screens, and gave max effort every second he was on the hardwood. While the 2013 Draft is shaping up to be one of the craziest in recent memory, Davies did everything he possibly could to assure himself of being drafted.

Lyons may have very well been the most exciting player at Portsmouth, exhibiting a few Russell Westbrook-esque moments while running the point. It’s not too often that you see your lead guard split a pick and roll, come down the middle, and bang right in traffic. Well, Lyons did that—twice. It was clear that he wasn’t a natural pure point guard, but he was good running the pick and roll, scored the ball at will, and exhibited a truly special level of talent en route to winning the championship. The upstate NY native needs to gain more poise as a decision maker, but the ridiculous amount of talent that he has is enough to supplant him on the NBA radar.

There wasn’t a player who worked harder in Portsmouth than Carl Hall. Only a few days removed from taking Wichita State to the Final Four, Hall was back at it again looking to prove his worth as an NBA player. He was a monster on the offensive glass, didn’t back down defensively against bigger opponents, and converted at a high rate around the rim. What stood out even more was the effort and hustle that Carl provided, which made him seem like an absolutely ideal teammate who leads by example no matter where he’s playing next season.

Looking like he could be a track star if he stopped playing basketball, Ennis was undoubtedly the top athlete at the PIT. The 6-7 swingman was a downright blur in transition, finished the best dunks that the camp saw, and showed some court vision that we didn’t see out of him at Long Beach State. He also showed that he can knock down the NBA three-pointer and has all of the physical tools to be a lockdown defender in the League, so don’t be surprised when you hear Ennis’ name called on Draft night.

The pride of sin city continued the legacy that he left at both Mojave HS and at UNLV at the PIT, where he was right there in the argument for the top lead guard in the building. At 6-3 with a filthy 6-10 wingspan, he has the ability to put the clamps on either guard position. Certainly not the fastest guy on the planet, Marshall did his damage with a change of speeds and the ability to beat you either way to the tin.

The best defender that the tourney had to offer, Scott straight put the clamps on any guard he was matched up with throughout the week. The NYC product left with a bang by posting 19 points, 8 dimes, and 6 steals in his final game. He displayed a blazing first step, finished well at the cup with both hands, and used his 6-9 wingspan to play bigger than he actually is. He was an adept playmaker when he had the ball in his hands, leading you to believe that he may have some combo guard potential at the next level.

One of NYC’s finest did not disappoint at the PIT and went out on a high note. MoMo posted 20 points, 8 assists, and just 1 turnover in his teams final game. He hit opposing point guards with a flurry of moves that resulted in him scoring 8 straight points, showing everything from a pull-up, to creative finishes with his left hand, to runners in the lane. Jones’ sturdy frame allowed defenders to bounce off of him like a ping pong ball when he was going to the rack. Everyone always knew that the nation’s third leading scorer could get buckets on anyone, but Portsmouth gave him the chance to show scouts what he could do as a playmaker.

The other half of Norfolk Sports Club’s outstanding point guard duo was DJ Cooper. The MAC Player of The Year has been a name amongst mid-major circles for years now and his play backed up the rep that many in the midwest have thrown out there for years. He pumped out a near perfect final game with a statline of 20 points, 10 dimes and 8 boards without committing single turnover. Cooper shot the NBA three effortlessly and while he’s going to have to prove that he isn’t too small to play in the League during workouts, Cooper exhibited the type of playmaking skills in the final day that you can only dream for out of a lead guard.

The WAC Player of The Year came into Portsmouth as a guy who few outside of the west coast and left an intriguing prospect. At 6-10, he shoot it out to 15 feet, provides presence in the interior as a shot-blocker, and looked to bang absolutely everything that he got in the paint. Coordinated bigs like Barone don’t exactly come a dime a dozen, so he should have no problem landing a number of NBA workouts leading up to the Draft.