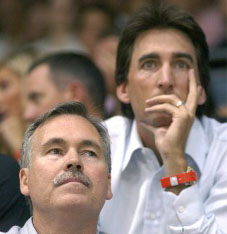 As the playoffs continue, and the pre-draft stuff heats up, there is one question on everybody’s mind. Who will coach the Phoenix Suns? One possible candidate is Vinny Del Negro. He has been an assistant general manager after some time as a radio analyst. But there’s something else on Vinny’s mind.

“It (coaching) has always been tugging at me,” said Del Negro, who closed a 14-year NBA playing career in Phoenix. “I really enjoy the people in the organization. I enjoy the business part of it, but this process has opened my eyes to the passion I have for coaching.”

So, a guy with no coaching experience to lead a MUST WIN NOW team with Shaq on it, who is no fan of playing for coaches without multiple championship rings. If you read more of the story, it looks like Steve Kerr is big on players we remember as players but not really as coaches. For a veteran team, that’s an “interesting” move.

His last year as a player on the Spurs was the year before they won their first title in the Pop-Duncan era. He’s the Donnie Baseball of the Spurs! He was a staple of all those Spurs teams that were considered too soft to get to the Finals. The Phoenix Suns know about that already.