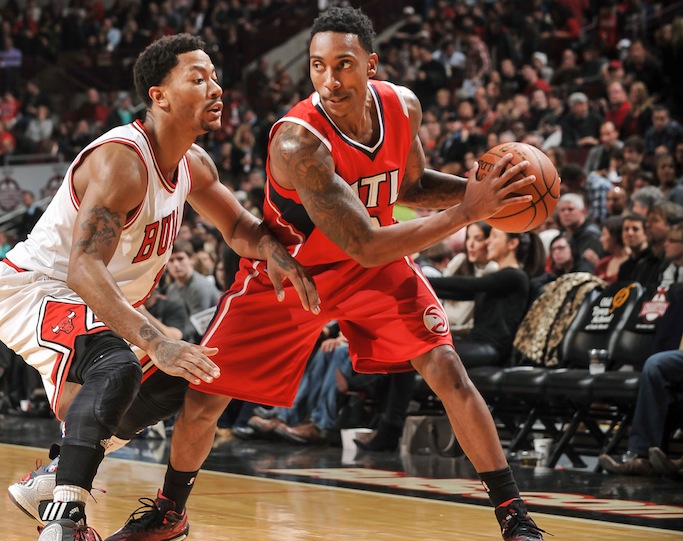 This is a prime example of “a win’s a win” for the Charlotte Hornets. This game was one of the ugliest of the season, as it took five extra minutes for one of these teams to reach 80 points. Both teams shot below 36 percent and Charlotte won despite shooting a dreaded 30.7 percent from the field. Guards Gerald Henderson (20 points, 4 assists, 4 rebounds) and Lance Stephenson (13 points, 4 rebounds) were the only Hornets players in double figures as Stephenson enjoyed jawing with many of his former teammates. The Hornets were playing without teammates Kemba Walker and Al Jefferson. Marvin Williams (9 points, 7 rebounds, 3 steals) hit a big 3-pointer that gave Charlotte a 68-66 lead with 51.3 seconds remaining. Rodney Stuckey (8 points, 4 assists), though, knocked down a pair of free throws with 13.1 seconds left to send the game into overtime. The Hornets went on to lock down defensively and only allowed the Pacers to score a single field goal in overtime. David West (19 points, 8 rebounds) led Indiana in scoring. The Hornets only turned the ball over seven times while the Pacers coughed it up 19 times. This led to Charlotte attempting 17 more shots. These two finished with the fewest combined points (151) in overtime in the shot clock era.

The Pistons kept pace with the Hornets as these two teams have almost climbed out of the bottom of the East and caught the eighth seeded Brooklyn Nets. Detroit easily took care of Philly as they led 15-4 a little more than three minutes into the game. Brandon Jennings (10 points, 6 assists), who has been on an offensive tear since Josh Smith departed, had eight points and two assists during this sprint to start the game. Stan Van Gundy has started to open up the offense to his lefty point guard and it is quickly paying dividends. The Pistons sustained this double-digit lead for almost the rest of the game. Jennings cooled off after his hot start, but Kyle Singler (20 points, 6-8 on 3-pointers) picked up the slack and had one of his best shooting performances of the season. Greg Monroe (12 points, 13 rebounds, 4 assists) and Andre Drummond (8 points, 15 rebounds, 3 blocks) continued to dominate the interior, combining to snatch 28 rebounds. For the Sixers, they collectively turned the ball over too many times (22). No one had more than four—Michael Carter Williams (15 points, 6 assists, 4 turnovers)—but seven players had at least two turnovers.

It has becoming difficult to find new ways to describe just how well this Hawks team has been playing during their current 12-game winning streak and for practically the entire season. Jeff Teague (17 points, 11 assists, 3 steals, 3 blocks) ran the offense to perfection, Kyle Korver (24 points, 6 rebounds, 7-9 on 3-pointers) was lights out from deep, Al Horford (22 points, 9 rebounds) acted as the anchor in the paint and Paul Millsap (16 points, 6 assists, 5 rebounds) filled the gaps where needed. No one on the bench stood out, but they all provided just enough to help give Atlanta the victory. Their ball movement is so crisp and quick while they all seem to be on one string on defense. This team has simply bought in to Budenholzer’s system and trusts one another. The Hawks did lead by double-digits early in the fourth quarter before Derrick Rose (23 points, 10 assists, 8 rebounds) and Pau Gasol (22 points, 15 rebounds) started to bring the Bulls back. After Rose made a reverse layup with 4:25 to go in the final quarter, Chicago only trailed 93-88. The Hawks, though, finished the game 3-5 (60 percent) from the field and 8-10 (80 percent) on their free throws. This can marked up as yet another quality road win for the soaring Hawks. They took down the Raptors, Wizards and now Bulls all this week.

A night after the Warriors were thunderstruck by Durant and Westbrook, Golden State got back to their winning ways in commanding fashion. Stephen Curry (27 points, 11 assists, 7 rebounds, 3 steals) and Klay Thompson (27 points, 5 blocks, 3-5 on 3-pointers) came out of the gate focused, as Curry had five assists and Thompson had seven points in the first 12 minutes. The turning point in this matchup came after halftime when Curry found his touch. During a 38-21 onslaught in the third quarter, the Warriors point guard poured in 15 points and was in that mode when he could make any shot from anywhere on the floor with anyone guarding him. At least Saturday night, he certainly looked more like an MVP than James Harden (12 points, 4 assists, 4 rebounds), who missed all four of his 3-point attempts. Even with Andrew Bogut (2 points, 6 rebounds, 2 blocks, 20 minutes) back in the starting lineup, Dwight Howard (23 points, 10 rebounds) led the way for the Rockets. However, Houston’s offense started to sputter in the third when they couldn’t make their treys. David Lee (18 points, 8 rebounds, 8-13 from the field) is still trying to figure out his role on this team, but he played a very efficient 24 minutes. The Warriors shot 54.9 percent from the field while the Rockets only shot 42.0 percent.

The Wizards bounced back from their loss to the Nets Friday night and split this home-and-home series. While Brook Lopez (15 points, 5 rebounds) stole the show Friday, the entire Wizards frontcourt carried Washington to victory. Nene (20 points, 6 rebounds, 2 blocks, 2 steals, 8-12 from the field) led the way while Marcin Gortat (10 points, 16 rebounds), Kris Humphries (13 points, 6-7 from the field) and Kevin Seraphin (12 points, 5-7 from the field) all produced when they were on the floor. With an already strong backcourt in John Wall (11 points, 6 assists, 6 rebounds, 3 steals) and Bradlet Beal (17 points, 8 assists, 9 rebounds), if this four-man unit down low can find their rhythm and balance with one another, this team’s offense becomes extremely hard to stop. Jarrett Jack (22 points, 8 assists, 4 rebounds) had his second straight 20-point performance, as he was the only Nets player to score in the final three minutes of the game. The Wizards closed this game out well, getting great ball pressure on late defensive possessions. The Wizards found a way to pull this one out despite shooting an abysmal 14-27 (51.9 percent) on their free throws.

These two teams have been heading in different directions of late and the trend continued as the Grizzlies picked up their fourth win in a row. Zach Randolph (20 points, 15 rebounds) had a bog double-double, gobbling up rebounds as he does night in and night out. His biggest moment of the game, though, came with 29.9 seconds left in the game when he sank two free throws to extend a four-point lead to six. Before that, Beno Udrih (17 points, 7 rebounds, 7-7 from the field) knocked down a jumper to make it a two-possession game. Newcomer Jeff Green (17 points, 5 rebounds), along with Courtney Lee (17 points, 4-6 on 3-pointers) and Udrih, all played well down the stretch for Memphis. Marc Gasol (15 points, 8 rebounds, 6 assists, 3 b) did a little bit of everything throughout the game. The Blazers received plenty of huge plays from LaMarcus Aldridge (32 points, 9 rebounds, 3 blocks) and Damian Lillard (23 points, 6 assists, 6 rebounds) while Wes Matthews (25 points, 7-14 on 3-pointers) had his shot going from deep. However, the Blazers depth has never looked so weak as it did Saturday night. Outside of these three players, the next highest Blazers scorer was Steve Blake…he had five points. The Grizzlies built up a 20-point lead early in this one and held on as Portland ran out of steam and offensive options.

Andrew Wiggins (31 points, 9 rebounds, 3 blocks, 11-17 from the field, 4-5 on 3-pointers) came through with his best performance of the season to give the Wolves their second win in the past three games. The rookie also got a big boost from Robbie Hummel (15 points, 13 rebounds), who had two crucial tip-in baskets in the final quarter. But the story of the game was Wiggins, who had his game going inside and out. He brought the energy all night long and it spread to the rest of his teammates. Thaddeus Young (22 points, 6 rebounds, 5 assists, 3 steals) even showed some life in putting up a solid line. For the Nuggets, guard Ty Lawson (22 points, 7 assists) and Jameer Nelson (16 points, 4 assists) led the offense and J.J. Hickson (14 points, 10 rebounds) notched a double-double. However, they just couldn’t slow down Wiggins and the Timberwolves, especially right out of the gate. Minnesota led 37-25 after the first quarter. The Wolves shot 53.8 percent from the field while the Nuggets shot 41.3 percent.

This game was close right up until halftime as neither team led by double digits and the score was tied after the first and second quarter. However, in the third quarter, Chris Paul (12 points, 9 assists, 4 rebounds) and Blake Griffin (30 points, 5 rebounds, 5 assists, 11-16 form the field) took this game over in just a few minutes. After Ben McLemore (14 points) knocked down a jumper with 5:33 left in the third, these teams were knotted up again 64-64. The Clippers then went on a quick 15-2 as Paul and Griffin made up nine of these 15 points. They later went on a 8-1 run to start the fourth quarter and cruised to a victory the rest of the way. Griffin had 18 of his 30 points in the second half. Matt Barnes (26 points, 10 rebounds, 3 steals, 4-9 on 3-pointers) had an extremely efficient game and has been playing well of late. Rudy Gay (22 points, 5 rebounds) returned for the Kings and had 22 points in 34 minutes. Jason Thompson (23 points, career-high 22 rebounds) had a career-best performance, fairing well against the strong frontline of Griffin and DeAndre Jordan (8 points, 9 rebounds, 3 blocks). He was a key reason the Kings outrebounded the Clippers 54-34 and grabbed 22 offensive rebounds. The Clippers were just too crisp on the offensive end of the floor as they only had five turnovers, compared to 17 turnovers for the Kings.