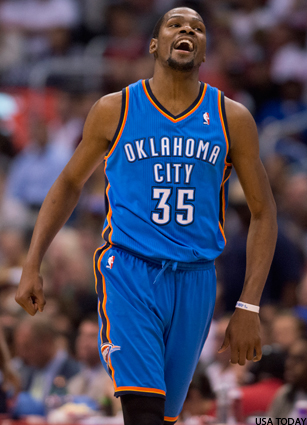 Cleveland put together a total team effort to wipe the floor with the Pistons. The Cavaliers racked up a season-high 41 assists and hit 57 percent from the field to keep their super-thin Playoff hopes temporarily alive – they were officially eliminated when the Hawks beat Boston. Dion Waiters led seven Cavs in double figures with 22 points, also passing out 8 assists, while Anderson Varejao (11 points, 12 rebounds) and Matthew Dellavedova (14 points, 12 assists) both notched double-doubles off the bench.

The Pistons drew iron all night, making 35 percent of their field goal attempts. Brandon Jennings and Jonas Jerebko both dropped 17 points, while Andre Drummond put up 11 points and 14 rebounds.

The Magic took advantage of a short-handed Nets team and squeezed out a tight win, hanging on in the final seconds of the fourth quarter. Arron Afflalo (25 points) hit a crucial 3-pointer and made two free throws in the final two minutes and Jameer Nelson (14 points, 7 assists) took care of business at the line the help the Magic close it out. Victor Oladipo netted 17 off the bench as Orlando shot 56 percent from the field.

Joe Johnson (31 points, 11-19 shooting) poured in 8 points in the final 1:39, but had a potential game-tying triple denied. The Nets were without Paul Pierce and Shaun Livingston on the second night of a back-to-back, while Kevin Garnett (5 points, 8 rebounds, 6 assists) played just 17 minutes as he works his way back from injury.

They allowed the 76ers to hang around all night, but the Raptors pulled away late to bury their opponents. Kyle Lowry put up 29 points and 8 assists to lead Toronto, while Jonas Valanciunas put aside his off-court troubles – he was arrested for drunk driving just three days prior – and went to work on the Sixers to the tune of a career-high 26 points and 12 rebounds.

Michael Carter-Williams (19 points, 9 rebounds, 8 assists) has rebounded magnificently from his mid-season slump, and he posted a near triple-double against the Raps. Henry Sims put up 22 points and 8 boards for the Sixers, who guaranteed themselves no worse than the 5th pick in the draft with the loss.

In a battle for the coveted 6-seed in the East, the Bobcats edged past the Wizards in overtime. Al Jefferson (20 points, 18 rebounds) leaked out for a layup to tie it in the final seconds of regulation and Kemba Walker (17 points, 12 assists) hit the only field goal of OT when he drilled a triple to give the ‘Cats the lead for good. With the win, Charlotte earned the tiebreaker over Washington in case of the teams ending the season tied.

John Wall (14 points, 12 rebounds, 11 assists) recorded a triple-double and nearly carried Washington to the win, hitting a layup to tie it and finding Marcin Gortat (27 points, 14 rebounds) for a rolling layup to give the Wiz the lead before Jefferson’s late score. The Wizards went 0-8 from the floor in OT to let the game slip away. On the positive side, Nene (10 points) returned to the Washington lineup after a six-week absence.

The Hawks solidified their standing in the East and took care of the Celtics at home. Jeff Teague had 19 points and 8 assists and Kyle Korver knocked down 4-6 triples en route to 17 points to lead Atlanta as they increased their lead for the 8-seed to two games. The Hawks racked up 30 assists on their 40 made field goals and all five starters hit double figures in scoring.

Rajon Rondo had 19 points and 12 assists and Avery Bradley hit all four of his 3-point attempts to score 24 points for the Celtics. Boston now has the third-worst record in the League.

Needing every win they can get down the stretch, the Grizzlies got a big one against the Heat, withstanding a massive effort from LeBron James. After trailing for most of the game, Memphis blew past Miami in the fourth quarter. Zach Randolph was a monster for the Grizz, scoring 25 points on 12-15 shooting and grabbing 11 boards. Mike Conley (26 points) hit several crucial jumpers late and Marc Gasol made his presence felt with 20 points, 14 rebounds and 2 blocks.

Bron put up 37 points (14-23 shooting), 6 rebounds and 5 assists for Miami, but the Heat had trouble holding onto the rock against Memphis’ quick hands. The Grizzlies picked Miami for 5 steals in the fourth quarter alone, leading to 12 Memphis points. Rashard Lewis came off the bench to score 17 for the Heat, hitting 4-6 from deep and converting a 4-point play the keep the Heat in it. Miami was once again without Dwyane Wade as he recovers from a hamstring injury.

Frank Vogel granted his starters’ wishes for some rest, and the Pacers did just fine without them as they got past the Bucks on a last-second runner by Chris Copeland (18 points, 7-8 shooting in 17 minutes).

All five members of the Pacers’ starting five sat out, giving the bench some extra run. Evan Turner, who has struggled since being acquired at the deadline as their potential “missing piece,” put up 23 points, 7 rebounds and 9 assists, while Luis Scola went for 24 points and 9 boards. With Miami’s loss, the Pacers took back the top spot in the East in advance of their showdown with the Heat on Friday.

Brandon Knight had 25 points and 10 assists to lead Milwaukee, and the Bucks got another 20 points from Ramon Sessions. With either their next loss or the 76ers’ next win, the Bucks will clinch the worst record in the League – not to mention the best odds to land the No. 1 pick in June’s draft.

In the tightly packed middle of the Eastern Conference, the Bulls kept up the pace by pounding the Timberwolves. Joakim Noah (15 points, 13 rebounds, 10 assists) put up his fourth triple-double of the season, tying him for tops in the League and the Bulls caught fire from deep around him, knocking down 11-21 from behind the arc. D.J. Augustin scored 21 points and hit 4-7 triples off the bench, while Jimmy Butler (14 points, 3-6 from deep, 7 assists) and Kirk Hinrich (16 points, 7-9 from the floor) both put up efficient efforts.

Kevin Love had 17 points and 10 boards to lead the Timberwolves, who were without starters Nikola Pekovic and Kevin Martin.

The early-season surprise Suns still haven’t gone away as we’ve hit the final week of the regular season, and they’re heating up again at the perfect time. Phoenix won their third straight, holding their one-game lead over Memphis for the final Playoff spot in the West. The Suns’ backcourt was fantastic, as Goran Dragic (20 points, 9 assists) and Eric Bledsoe (16 points, 6 rebounds, 6 assists) were efficient, combining to shoot 15-27, and aggressive, as they picked up 5 blocks and 3 steals between them. Gerald Green poured in 21 off the bench to help power Phoenix past the Pelicans.

Playing without Anthony Davis (back spasms), New Orleans had no one to rely on to close the game after a 10-0 run gave them a lead early in the fourth quarter. Jeff Withey had a career-high 17 points off the bench, while Tyreke Evans struggled to 10 points on 4-11 shooting.

A Randy Foye explosion powered the Nuggets to a win over the Dwight-less Rockets. Foye went off for 30 points and 15 assists, netting 22 points in the third quarter alone after handing out 11 of his assists in the first half. Kenneth Faried chipped in 23 points and 9 boards and Timofey Mozgov dropped in 22 points, as both were on the receiving end of plenty of Foye’s first half dimes.

James Harden struggled for Houston, scoring just 10 points on 1-9 shooting while also putting a scare into fans when he left briefly in the third with a shin injury. The Rockets played without Dwight Howard for the 10th time in 12 games, and it showed – the Nuggets rolled to 66 points in the paint. Jeremy Lin led Houston with 18 points and Omer Asik put up a double-double with 12 points and 12 rebounds.

A late charge by the Kings had Portland in danger of letting a valuable win slip away at home, but Dorrell Wright bailed the Trail Blazers out by hitting a triple with 7.9 seconds to go, giving them the win with his only bucket of the game.

Damian Lillard (19 points, 10 assists) hit a 3-pointer to give the Blazers a five-point edge with 5:30 to go, but the Kings battled back with a 7-2 run to tie it up. After a couple of buckets by LaMarcus Aldridge (22 points, 8 rebounds), Portland still couldn’t shake the Kings until Wright’s big shot. The W gives the Blazers a two-game lead over the Warriors for the 5-seed heading into the season’s final week.

DeMarcus Cousins put up a smooth 30 points and 12 rebounds for the Kings, including two game-tying shots in the final two minutes and two free throws to give them their final lead. Rookie Ray McCallum had 23 points and 8 assists, while fellow rook Ben McLemore dropped in 16.

Everyone has their fingers crossed for this series in the second round, right? The Thunder won out in a battle between the two teams vying for the 2-seed in the West, coming up big after the Clippers cut down a big lead in the fourth quarter. Russell Westbrook (30 points, 11 rebounds, 6 assists) was everywhere for OKC all night. When things got tight in the fourth, he hammered home a dunk off of one offensive rebound, then grabbed another board off a miss by Serge Ibaka (15 points, 7 rebounds, 4 blocks) with 15 seconds to go to help seal it. Kevin Durant (27 points, 8-26 from the field) shook off a tough shooting night to drill a crucial 3-pointer as the Thunder struck back against the Clippers’ furious run.

L.A. ran off 14 straight points to cut a 15-point lead down to one in the fourth, using two 3-point bombs from Chris Paul (25 points, 8 assists) and the usual excellence and hustle of Blake Griffin (30 points, 12 rebounds) to get back into it. Darren Collison provided a spark off the bench with 12 points, while DeAndre Jordan had 10 points, 12 rebounds and 3 blocks as the Clips’ comeback attempt fell short in the final minutes. This puts L.A. three losses behind the Thunder in the loss column, all but locking them into the 3-seed.