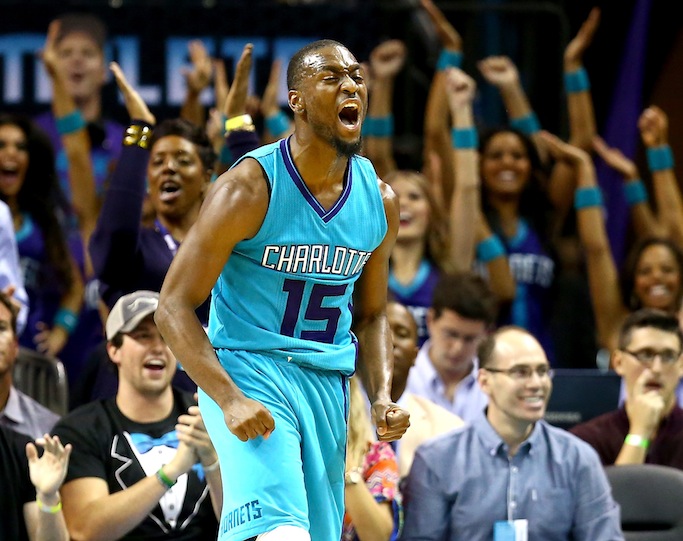 The last time we saw a Charlotte Hornets-Milwaukee Bucks matchup, Jabari Parker was just seven years old. It was April 2002, and Ray Allen went for 47 points and the win.

In their return to Charlotte twelve years later, the Hornets looked dead in the water until battling back from a 24-point third quarter deficit—the largest comeback in franchise history. Kemba Walker’s 16 second-half points were highlighted by a three-ball with 1.6 remaining to send it to overtime. With the game knotted at the end of OT, Kemba hit his signature stepback move, rose up, and nailed another jumper—this time from a step inside the three-point line—to win 108-106 and successfully ruin Jabari’s NBA debut.

Charlotte boasted a balanced scoring attack, as four starters attained double figures. Newly acquired Lance Stephenson posted near-triple-double numbers with 7 points, 13 rebounds, and 8 assists in 40 minutes. Michael Kidd-Gilchrist showed off a new and improved jumper, shooting 75% from the field for 17 points to go along with 8 rebounds and 3 blocks. Brandon Knight was Milwaukee’s top performer with a 22/13/8 line, while Parker struggled to find the cup, finishing 3-9 for 8 points, despite looking frighteningly good on one coast-to-coast play.

After losing Paul George and Lance Stephenson to injury and free agency, respectively, it’s no secret that the Pacers need to find other scoring options to win games. Well, that’s exactly what they did, at least for one night in October.

Roy Hibbert led the way for Indiana with 22 points, 8 rebounds, and 8 blocks. Donald Sloan and Rodney Stuckey chipped in with 16 points apiece, and CJ Miles added 15 of his own. Meanwhile, Philadelphia shot just 38 percent from the field, including a horrific 6-21 from long distance. After missing all of last season with a torn ACL, Nerlens Noel finally got to play in an NBA game, shooting just 2-11 from the field but grabbing 10 boards in 35 minutes. The lone offensive bright spot for the Embiid-less Sixers was Tony Wroten, who dropped 22 points, 8 rebounds, 7 assists, 3 steals, and this ferocious dunk over Ian Mahinmi.

Rajon Rondo must’ve woken up on the right side of the bed after declaring himself a “nap-time” decision for the C’s opener, because he decided to suit up and play against Brooklyn on Wednesday night. And, despite missing the entire pre-season, Rondo showed no signs of rust when it comes to what he does best: dishing out dimes. Number 9 handed out 12 assists to go along with 13 points and 7 rebounds to lead Boston in a 16-point rout of the Nets.

The Celtics coasted to victory thanks to eight players scoring in double figures. Kelly Olynyk dropped 19, Jeff Green added 17, and Marcus Smart finished with 10 points and 4 steals in his rookie debut. The Nets looked solid on offense, led by D-Will, Joe Johnson, and Mirza Teletovic, but they simply failed to contain Boston on the other end of the floor.

The Heat and the Wiz were neck-and-neck for most of the night until Miami took control thanks to big buckets from starters down the stretch. Chris Bosh, D-Wade, and Norris Cole combined for 70 points as Miami started its post-LeBron era off on the right foot. Newcomer Luol Deng added 12 points on 4-8 shooting, and James Ennis made the play of the game when he came down the lane and obliterated Washington’s Rasual Butler with a poster dunk.

The real story of this game, however, was the way Bosh played. All signs are pointed to his having a huge year—even shades of his Toronto years, perhaps? If his 26/15/4 statline in Game 1 of 82 is of any sort of indication whatsoever, then he’s certainly on the right track. It’ll be interesting to see what he has in store for the remaining 81.

The Hawks were within four points of the Raptors with 32 ticks left, but Toronto extended its lead late to seal it thanks to a pair of free throws from DeMar DeRozan (after he bricked two but got his own rebound on the second miss) and a fast break dunk from Patrick Patterson. DeRozan and Kyle Lowry shot just 4-16 and 3-11 from the field, respectively, but the rest of T. Dot’s starters picked up the slack; Jonas Valanciunas went for 17 and 8 and Amir Johnson finished with 16 and 10. The Raps’ backcourt found other ways to get involved—DeRozan had career highs in rebounds (11) and steals (6), while Lowry dropped 10 assists. The Hawks were led by Jeff Teague’s 20 points and 8 assists as Atlanta lost despite shooting 13-22 (6 courtesy of Kyle Korver) from the three-point stripe.

The Grizzlies squeezed past the Timberwolves in the night’s closest game apart from Hornets-Bucks. The T-Wolves’ front line couldn’t do anything to stop Marc Gasol and Zach Randolph; the two bruisers had a field day, combining for 57 points and 22 rebounds. The game was deadlocked at 96 until the Grizz took the lead on a Z-Bo layup and never looked back. Interior play factored heavily into the outcome, as Memphis outscored Minny 58-34 in the paint. Ricky Rubio looked good for Minnesota with 12 points and 7 assists, but he also turned the rock over seven times. Thad Young was on the receiving end of many of those dimes, finishing with a team-high 26 points. Andrew Wiggins started but  played only 19 minutes in his debut, dropping 6 points, 3 rebounds, and 2 steals.

Derrick Rose didn’t have to do too much in his much-anticipated return to the hardwood. In fact, he only played seven minutes in the second half, because by then, the first game of ESPN’s double-header was well out of hand. DRose finished with 13 and 5, but we should see a boost in those numbers as he continues to get reps. Pau Gasol’s 21 and 11 plus Taj Gibson’s 22 and 8 were the high marks for Chicago, while no one wearing blue and orange could even muster 15, not even Melo. The Knicks looked sloppy and out of sync in its first game under Derek Fisher’s tutelage, and they appeared uncomfortable trying to run the triangle offense that Phil Jackson made look so sweet.

Chicago’s bench was sensational in the 24-point blowout at MSG. In the first half, the Bulls’ second string shot 13-17, while their starters went just 6-23. Dougie McBuckets and Nikola Mirotic should be reliable outside threats for Chi-town this season.

The Manimal was on full display at the Pepsi Center last night. Kenneth Faried brought his usual energy and finished with a team-high 22 points and 17 rebounds as the Nuggets handed the Pistons the L in a low-scoring affair. Arron Afflalo pitched in with 15 and Timofey Mozgov added 13 at the center position. Detroit was stale on offense, with no player besides Josh Smith (25 points) really asserting himself. Andre Drummond did, however, deliver a couple of monster dunks. The game shifted when the Nuggs took the lead on a 9-0 third quarter run and carried that momentum with them into the fourth quarter.

Dwight Howard scored 10 of Houston’s first 12 points and the Rockets never trailed after taking the lead with 2:43 left to go in the first half. After a blistering start, D12 finished the game with 22 points on 10-16 shooting to go along with 10 rebounds. James Harden posted 18/10/7 and free agent acquisition Trevor Ariza provided 20/5/4 to help Houston improve to 2-0 on the year. Alec Burks and Derrick Favors led Utah in scoring, dropping 18 and 16, respectively, in the loss.

It’s going to be a looong season for the Los Angeles Kobes. After getting trounced by the Rockets in Tuesday night’s opener, L.A. looked no better against a Phoenix team that was finding buckets every which way. Bryant had 25 field goal attempts—as many shots as the rest of the Lakers’ starters combined—and he didn’t even play the fourth. The Black Mamba connected on more shots (11) than any other Laker even attempted, finishing with 31/4/3.

The Suns shone, as all five starters reached double figures in scoring. PHX’s backcourt trio of Goran Dragic, freshly resigned Eric Bledsoe, and newly acquired 5-9 dynamo Isaiah Thomas combined for 57 points. Power forward Marcus Morris shot 57 percent from the field with 21 points. In other words, Phoenix cruised to victory in the night’s biggest blowout. The only hiccup for them occurred in the third quarter, when Bledsoe was ejected for kicking the scorer’s table, upset over a clear no-call with his team up 25.

Steph Curry (24/10/5/6) led an undermanned Warriors squad in a decisive win over the Kings in Steve Kerr’s head coaching debut. Curry did Curry things, and Klay Thompson showed out as well with 19 points and 6 assists. Marreese Speights delievered 16 on 8-13 shooting off the bench as Golden State beat Sacramento handily. Boogie Cousins, a player whom many feel is primed for a huge season after playing well in this summer’s FIBA World Cup, dropped 20 points and grabbed 11 rebounds, yet fell victim to the turnover bug with 6 costly giveaways.

With KD likely to miss a good chunk of the season, Russell Westbrook is tasked with shouldering much of the Thunder’s load offensively. Last night, Russ shot 11-26 for 38 points including 26 in the first half. It wasn’t enough to conquer Portland, however, as the next highest scorer for OKC was Lance Thomas (yes, Lance Thomas) with just 14. The Blazers, meanwhile, had no trouble finding the bottom of the net. LaMarcus Aldridge came up big with 27 points despite just 3 rebounds, and Wesley Matthews (22 points), Nicolas Batum (16 points), and Chris Kaman (12 points) all chipped in.