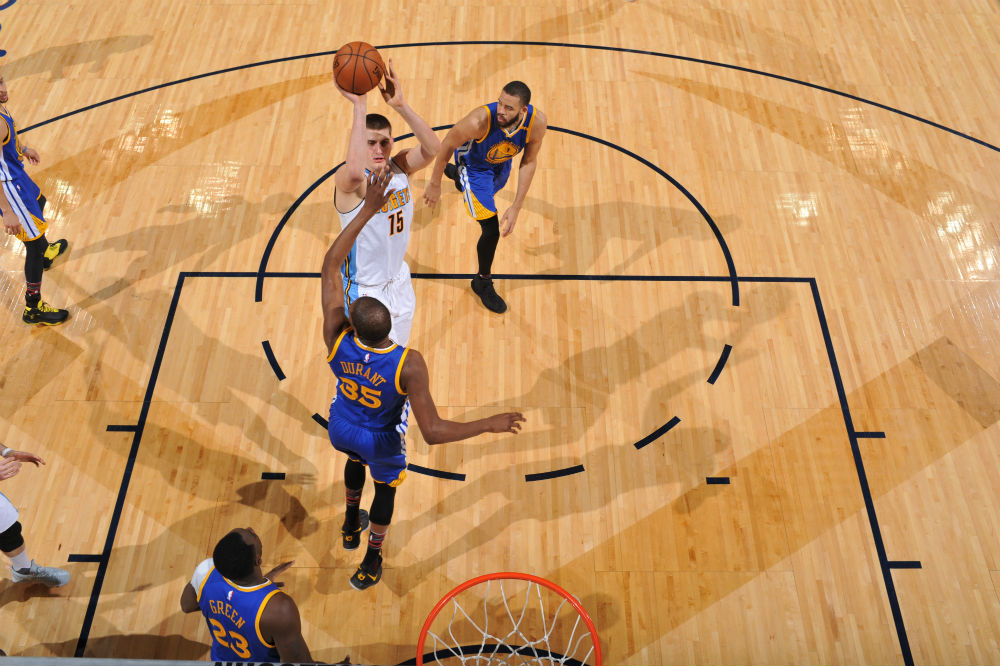 After Saturday’s loss to the Lakers, Nicolas Batum guaranteed that his Hornets would beat the 76ers tonight. Dario Saric had other ideas. The rookie poured in 18 points and 11 boards off the bench, leading Philly to a 105-99 victory. Kemba had 29 for the Hornets, who have lost ten of their last eleven.

The Spurs bounced back after a rough loss to the Knicks yesterday, clinching a winning season for an NBA-record 20th straight time. Kawhi led the way with 32 points – his fourth straight outing with 30+. Paul George scored 27 in the loss. After a hot stretch, the Pacers have dropped their last four.

Mike Conley had 32 points and Marc Gasol flirted with a triple-double (19p/9r/8a), as the Grizzlies cruised to a victory in Brooklyn.

Memphis has won four of their last five, while Brooklyn has lost thirteen straight overall and fifteen straight at home.

Orlando snapped a season-worst four-game losing streak with a nice victory over the red hot Heat. They shot 49% from the field as a team. Evan Fournier led all scorers with 24. One positive for Miami: Dion Waiters returned from a sprained ankle and posted 23 points on 10/19.

The Wizards put on another show tonight, shooting 58% from the field and 62% from deep while holding the Thunder to just 35% and 21% respectively. At one point, OKC missed 24 consecutive shots, prompting Washington to take a 34-point lead. John Wall did his thing again with 15 points and 14 assists, none prettier than this one in transition.

Greg Monroe was a monster in this one, scoring 25 points and grabbing 13 boards in 31 minutes off the bench. Milwaukee also got good production from Michael Beasley (23p/4a/3r), who has seen an uptick in minutes since Jabari got injured.

Detroit just didn’t have it after a tough win over Toronto yesterday. They got a combined 19 points out of their top three guards and connected on just 7 of 21 three-point attempts.

Boston won their third straight game (and 10th of their last 11), thanks to 29 points and 8 assists from Isaiah Thomas. Dallas’ starting point guard Deron Williams was ejected in the second quarter after getting hit with two technical fouls, so rookie Yogi Ferrel picked up the slack, scoring 20 points on 8/11 off the bench. The Mavs just couldn’t get stops in this one, allowing the Celtics to shoot 47% from behind the arc.

DENying the dubs. The Nuggets tied the NBA record for most three-pointers in a game with 24 (shooting 60%!) and rolled to a victory over the best team in the league. Nikola Jokic continued to impress, notching his second career triple-double (17p/21r/12a). Rookie Juancho Hernangomez also had a breakout game, recording a season-high 27 points, including six long balls. Golden State now has the same amount of losses they had all of last season.

Utah just couldn’t get any offense going, shooting 32% from the field and 17% from three (both season lows). Blake Griffin did a little bit of everything for the Clippers, posting 26 points, 10 rebounds, and 6 assists. Los Angeles has now won three straight.

After a narrow loss to the Kings last night, the Pelicans were able to close out a tight game tonight. Anthony Davis scored six consecutive points down the stretch, including the go-ahead bucket with 40 seconds remaining. He finished with 24 and 10 boards. Eric Bledsoe did all he could for the Suns, pouring in 37 points on 50% shooting.

After a back-and-forth final quarter, All-Star Paul Millsap hit a lefty floater at the buzzer that sent this one to overtime.

The Hawks went down by seven in the extra period, but scored the last twelve to secure the W. Tim Hardaway Jr. led the way with 25 points. CJ McCollum had 26 for the Blazers, who have lost their last five games against Atlanta.