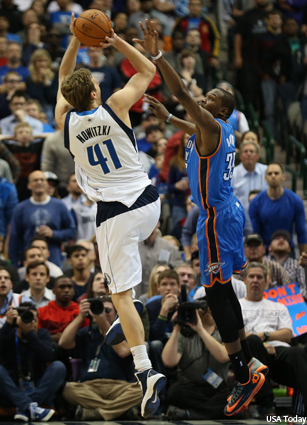 In the super competitive Western Conference, the Mavericks couldn’t afford a home loss, even against one of the elite teams in the League. Dallas put together an impressive offensive performance on Tuesday, throwing up 17 points in overtime to grab the victory against Oklahoma City.

Dirk Nowitzki had 32 points, 10 rebounds and 6 assists, and he was aided by Jose Calderon (22 points and 8 assists). The Mavericks weren’t able to slow down Kevin Durant, who went off for 43, but they forced Russell Westbrook into committing 8 turnovers. Dallas moves back into the eight spot in the West, though they are technically tied with the Memphis Grizzlies, who hold the same record.

Cleveland’s playoff hopes might be on the brink of extinction, but that didn’t stop the Cavs from coming out with an inspired effort against the Toronto Raptors. Without Kyrie Irving, who sat out with a strained biceps tendon, the remaining backcourt stepped up. Dion Waiters led all scorers with 24 points and Jarrett Jack added an efficient 13 points (6-9 shooting) to go with 5 assists and 5 rebounds. In 40 minutes, Luol Deng had 19 points, 7 assists and 6 rebounds.

The Raptors nearly completed a 21-point comeback, cutting the lead to 102-100 with seven seconds left. But Toronto point guard Grievis Vasquez appeared to fall over as he threw an errant pass on the final possession, and his team came up short. Kyle Lowry had 22 points and 10 assists, but the rest of his teammates struggled. Jonas Valanciunas was especially off his game, finishing with a -27 plus/minus in just 18 minutes of action.

The Blazers entered Tuesday night’s matchup against the Magic with a 5-8 record in the month of March. Still, they certainly wouldn’t have predicted a double-digit loss to a team that had lost nine in a row.

That’s exactly what happened though, as Portland struggled to generate any offense for most of the game. Robin Lopez was the lone bright spot with 20 points and 13 rebounds, but no one else on the team shot 50 percent from the floor (unless you count Meyers Leonard’s 1-1 shooting performance in one minute of action). Nikola Vucevic was a beast inside with 22 points and 10 rebounds, and Tobias Harris put up 25 points and 11 rebounds off the bench.

The Blazers remain in the fifth spot in the Western Conference, but only by the slimmest of margins—they’re a half game up on the Warriors and just 2.5 games above the ninth place Phoenix Suns.

Just when it looked like New York’s disastrous season couldn’t get any worse, the Knicks went to Los Angeles and lost by 31 to one of the few equally dysfunctional teams in the League.

The Lakers scored just 14 points in the first quarter, but quickly made amends for the slow start, pouring in 36 in the second and an absurd 51 points in the third. They shot 18-28 (64 percent) from beyond the arc and got some serious help from their bench unit, which contributed 82 points. Xavier Henry had 22 points in 23 minutes, Nick Young had 20 and Kent Bazemore had 18. Carmelo Anthony led the Knicks with 29 points. Even with the loss, New York still sits just three games back of the Hawks for the eighth seed in the Eastern Conference.