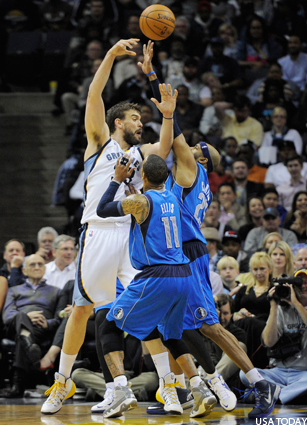 The Bobcats squeezed out a win in overtime, putting up a fight that gave them a chance to avoid the Heat in the first round. Unfortunately for Charlotte, a Wizards win later in the night ended that hope. Kemba Walker came up big in OT, scoring 8 of his 22 points to carry the ‘Cats. Despite leaving the game briefly early on after an injury, Al Jefferson finished with 10 points and 18 rebounds to finish off one of the best regular seasons his career.

With the loss, Chicago locked into the fourth seed in the East. D.J. Augustin once again came off the bench to lead Bulls in scoring, dropping in 17. Joakim Noah put up 14 points, 13 rebounds and 6 assists, and Carlos Boozer also posted a double-double with 14 points and 11 boards.

Resting three of their five starters, with the other two playing limited minutes, the Pacers still pounded the Magic. Rasual Butler and Chris Copeland tied for the team lead with 19 points each, and Evan Turner put up 14 points, 8 rebounds and 6 assists in the start. Of the nine Pacers who played, six of them hit double figures in scoring. Two that didn’t, starters Roy Hibbert (4 points, 1-7 from the floor, 7 rebounds) and George Hill (5 points), played 17 and 14 minutes, respectively. Paul George, David West and Lance Stephenson all got the night off as Indiana prepares for their matchup with the Hawks.

Maurice Harkless led the Magic with 14 points as the team capped off the season with the third-worst record in the League. Victor Oladipo struggled in the final game of his rookie year, scoring 4 points in just 17 minutes. Dipo did finish the season averaging 14 points, 4 rebounds and 4 assists.

In the game that carried the most weight coming into the night, Dallas and Memphis delivered a thriller. Mike Conley (22 points) hit two free throws with a second to go in overtime, and a jumper from Monta Ellis (18 points) caught iron at the buzzer after several attempts by Rick Carlisle to draw up the perfect play. With the win, the Grizz grabbed the seventh seed in the West, pitting them against the Thunder, while Dallas slides to No. 8 to take on San Antonio.

In a back-and-forth game, both power forwards put up stellar efforts. Zach Randolph bullied his way to 27 points and 14 boards and Dirk Nowitzki dropped in 30. Dirk dropped in a clutch wide-open triple to give Dallas the lead with 46 seconds to go in OT, but they couldn’t seal the win. Marc Gasol put up a line of 19-9-9 for Memphis.

Because the NBA is not always a logical place, the 76ers won their season series against the defending champions by handling a very short-handed Heat roster. Thad Young hustled as hard as ever, going for 20 points and 9 rebounds, while Michael Carter-Williams finished off his likely ROY campaign with 12 points, 6 rebounds and 4 assists. The Sixers head into the lottery with the second-best odds of landing the top overall pick in the draft.

The Heat, already locked into the second seed coming into the game, rested LeBron James, Chris Bosh and Mario Chalmers. Dwyane Wade played his third straight game in an effort to get the rust off, scoring 16 points in 23 minutes.

On the day longtime owner Herb Kohl sold the team, Milwaukee gave up an early lead and got pasted by the Hawks in the second half. Mike Scott led Atlanta with 17 points and Mike Muscala put up 15 off the bench. The Hawks, already locked into the 8-seed,  had nothing to gain from this game and rested Paul Millsap, while Jeff Teague (11 points) played just 20 minutes.

The Bucks’ miserable season ends with them having the worst record in the League. Brandon Knight put up 31 on 12-18 shooting, while John Henson scored 19 off the bench. Everyone’s favorite Greek, Giannis Antetokounmpo, put up 10 points, 5 rebounds and 3 assists to finish his tantalizing rookie season.

Tyreke Evans closed out a rough first season in New Orleans on a high note, leading the Pelicans past Houston with 25 points and 10 assists. He scored two crucial buckets late to help seal the win over an unmotivated Rockets team. Austin Rivers chipped in 18 points and 8 assists, while Anthony Morrow netted 15 off the bench.

The Rockets rested James Harden, Jeremy Lin and Chandler Parsons. Kevin McHale also kept the minutes for Dwight Howard (7 points, 4 rebounds) and Patrick Beverley (14 points) limited, as both are coming off of injury. Troy Daniels led Houston with 22 points off the bench, more than doubling his point total for the season.

The Jazz won a shootout against Minnesota to avoid setting the mark for their worst record since moving to Utah. Trey Burke put up the highest point total of his rookie season, going for 32 and dishing out 9 assists. Gordon Hayward (23 points, 10 rebounds, 9 assists) nearly recorded a triple-double in what could be his final game as a Jazzman, while Derrick Favors (21 points, 12 boards) also notched a double-double.

Speaking of last games, rumors will fly around Kevin Love (19 points, 10 rebounds, 9 assists) this summer after Minny finished under .500 yet again, while Wolves coach Rick Adelman is expected to retire in the coming days. Kevin Martin dropped 36 to lead Minnesota.

Oklahoma City needed some heroics late, but Kevin Durant delivered to help the Thunder lock down the no. 2 seed in the West. KD (42 points, 14-30 shooting) drove for the game-winning dunk with 16.5 seconds to go to give OKC the win, while also securing Durant’s fourth career scoring title in the process. Russell Westbrook chipped in 22 points, 8 assists and 6 steals. In the first round, the Thunder will get Memphis, the team that knocked out a Russ-less version of this team last season.

Kentavious Caldwell-Pope scored 30 points to lead the Pistons in their final game of a season that started with serious Playoff aspirations. The team’s two biggest off-season acquisitions, Josh Smith (DNP-CD) and Brandon Jennings (6 points, 2-9 shooting) were both miserable all year, jacking up more contested 3s than even the biggest skeptic thought possible. The Pistons’ lone bright spot, Andre Drummond, had 22 points and 13 boards while setting a team record for highest single-season field goal percentage. Greg Monroe (22 points, 8 rebounds, 9 assists) came close to a triple-double in what could be his final game with the team.

The Lakers picked up one last win in their lost season, taking care of a Spurs team looking ahead to the Playoffs. Eight Lakers scored in double figures, led by Jordan Hill’s 18 points and 14 rebounds. Nick Young dropped in 16 in what everyone hopes will not be Swaggy’s last game in forum blue and gold, but no one knows who will be back in L.A. come fall.

In true Popovich fashion, the Spurs played all 13 active players at least 12 minutes, while Tim Duncan got the night off. Kawhi Leonard topped the scoring column with 14 points. The Spurs get Dallas in the first round.

The Wizards raced past the Celtics, locking down the No. 5 spot in the East with the win. Bradley Beal dropped in 27 points and John Wall had 15 points and 9 assists as the backcourt duo gets ready for their postseason debuts. The Wizards don’t have an envious task ahead, as they get Chicago in the first round.

Boston finished their tank-tastic season tied with Utah for the fourth-worst record in the Association. Rajon Rondo sat out the finale, while rookie Kelly Olynyk put up 24 points to lead the team in scoring.

The Cavaliers coasted to a win against the resting Nets, closing out a disappointing season on a high note. Tyler Zeller finished his campaign with 22 points and 11 boards off the bench, while Dion Waiters dropped in 19.

Brooklyn, in an apparent attempt to get the Heat in the second (assuming they can get there), rested seven players, including all of their starters. Andray Blatche put up 20 points and 12 rebounds, while Marcus Thornton matched him with 20 points. The Nets get Toronto in the first round.

The Knicks finished up a disappointing season with a win, but the team they beat still got the end result they were looking for. With the Bulls’ loss, the Raptors wrapped up the third seed in the East, giving them a matchup with the Nets. Carmelo Anthony sat out what could have been his final game as a Knick, and J.R. Smith took advantage of his absence to drop 30 points, while somehow only jacking up five triples. The Raps were able to get their key players some rest early once they got word of Chicago’s loss. Kyle Lowry put up 22 to lead the team.

Enough has been said about this incredibly bad Knicks season, but they did take home the unofficial NBA Championship Belt as some solace to their fans.

Neither team had anything to play for and all the stars were resting (except Damian Lillard, who started to complete an 82-game season), but Portland and Los Angeles still gave fans a close game heading into the postseason. Will Barton put up a career-high 23 points and 10 rebounds for the Blazers, who blew a 22-point lead and allowed the Clippers to get back into it. Jamal Crawford, one of the few vital Clippers playing, scored 15 of his 34 points in the third quarter to pull L.A.into the lead before Barton helped right the Blazers’ ship in the fourth.

Blake Griffin was suspended for this game after picking up his 16th technical foul of the season, while Chris Paul and J.J. Redick stayed home to rest for the Clips. DeAndre Jordan played all of two minutes, giving the bench plenty of run. Portland rested LaMarcus Aldridge, while the rest of the starters all played no more than 14 minutes. L.A. takes on Golden State in round one, while Portland gets Houston.

The lights finally went down on a beautiful season in Phoenix as the Suns finished off one of the most surprising years in recent memory with a win. Archie Goodwin came off the bench to score a career-high 29 points, 12 of them in the fourth quarter, to lead the way as Phoenix’s starters got to take it easy. Marcus (22 points) and Markieff (15 points) Morris were both excellent as well for the Suns, who just missed the Playoffs despite finishing with 48 wins.

The future remains bright, with Coach of the Year candidate Jeff Hornacek getting a year under his belt and Goran Dragic and Eric Bledsoe (a restricted free agent) both highly likely to be back running the show again, plus a host of other assets and young players.

Ben McLemore finished off his inconsistent rookie season on a high note with 31 points, 5 rebounds and 5 assists. DeMarcus Cousins, who improved by leaps and bounds after receiving a massive contract extension before the season (how often do you hear that?) was suspended for picking up his 16th tech.

No matter who plays, these two teams can’t help but play an intense game. Jordan Crawford set his career high with 41 points and Harrison Barnes dropped in 30, his most for the season, as the Warriors’ reserves took down Denver. Stephen Curry, David Lee and Jermaine O’Neal all got the night off, while Klay Thompson played just 8 minutes for the Dubs. Golden State came into the night locked in the No. 6 spot in the West, and they’ll meet the Clippers in the first round.

Randy Foye put up 32 points and 11 assists as the Nuggets wrapped up a disappointing year; their win total declined by 21 from last season.