The Warriors take a commanding 2-0 lead. 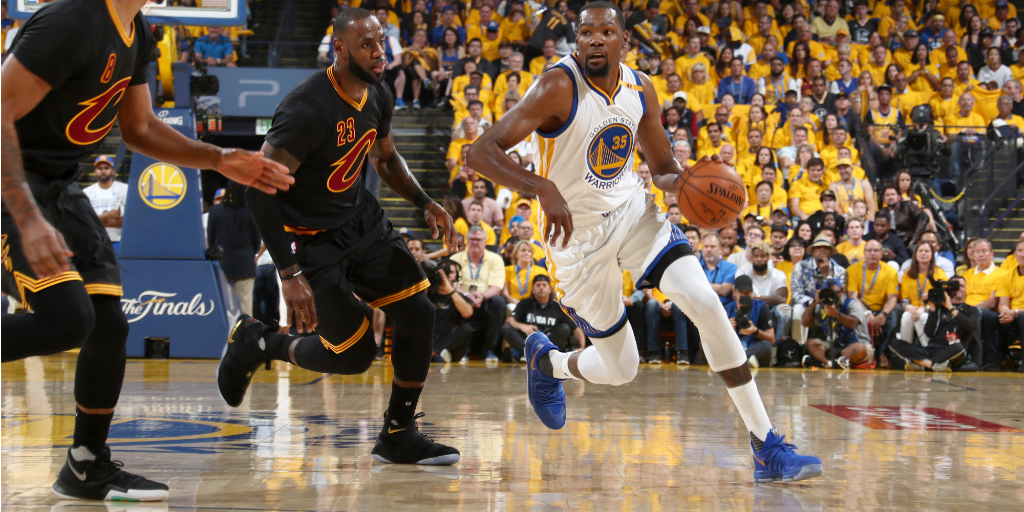 The Cleveland Cavaliers have a Kevin Durant problem.

For the second straight game, the Warriors’ major offseason acquisition was unstoppable, this time going for 33 points (13-22 shooting), 13 rebounds, 6 assists, 5 blocks and 3 steals to lead Golden State to a 132-113 victory and a 2-0 series lead in the 2017 NBA Finals. Golden State has not lost a game thus far in the playoffs.

While KD torched the Cavs on offense, he was perhaps even more impressive on the defensive end.

“His defense was amazing, and we needed it,” said Steve Kerr after the game. “I thought that Kev’s defense was unreal, and it was probably the key to the whole game.”

Kevin Durant is TOO GOOD. pic.twitter.com/xcOUf7VZ68

Durant’s presence and impact made things easier on his star teammates, too. Stephen Curry put up his first career Finals triple-double with 32 points, 10 rebounds and 11 assists, and Klay Thompson finally broke out of his playoff-long slump by putting up 22 points.

“For me, it did feel good to see the ball go in,” said Thompson. “More importantly, it felt good to get the win. I think tonight I was just in a good rhythm. It started with getting to the basket early and taking good shots. If I do that, it’ll all even out.”

The Cavaliers hung tough through the first half and trailed by three at the end of two quarters, thanks in large part to the efforts of LeBron James. The King notched his eighth career Finals triple-double with a 29-point, 11-rebound, 14-assist performance, tying Magic Johnson for the most career triple-doubles in NBA Finals history.

“Right now, it means nothing. But it will mean something,” LeBron said of tying Magic. “He’s one of the greatest to play this game. Right now, individuality means absolutely nothing when it comes to this team sport. But when I’m done, I’ll probably look back on it and say it was a cool feat.”

But it wasn’t enough.

Kevin Love scored 27 points to go along with 7 boards and Kyrie Irving dropped a quiet 19. But just like in Game 1, the Cavs bench struggled mightily.

“I thought for the most part with the game plan that we had we tried to execute it as close as possible. [We were] Much more physical today than we were in Game 1. And we forced them to 20 turnovers and they still beat us pretty good,” said James.

The series heads back to Cleveland for Game 3 and the Cavaliers clearly need to make some adjustments to slow down the Warriors’ juggernaut offense. There’s only so much LeBron James can do by himself.