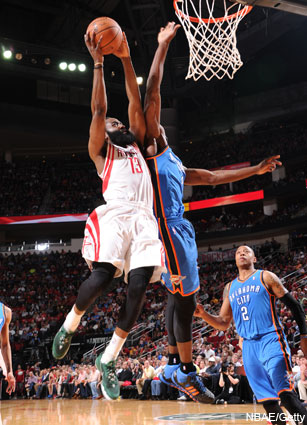 Memphis bullied the Nuggets to get a crucial win – really, every game is crucial in these next 10 days – as they chase a spot in the postseason. The Grizzlies’ front court pair of Marc Gasol (24 points) and Zach Randolph (20 points, 15 rebounds, 3 blocks) were dominant, controlling the game from the high- and low-post alike. MIke Conley had 21 of his own as the Grizzlies held ground for the final spot in the Playoff race.

Randy Foye led Denver with 21 points, also grabbing 9 rebounds, while Ty Lawson came off the bench for disciplinary reasons and netted 16 points, with most of them coming at the free throw line, where he was 10-12.

The Bobcats reached .500 for the first time in more than four months, topping the Magic at home. Al Jefferson was on the receiving end of MVP chants and, while he has virtually no shot at the award, he’s certainly been invaluable for Charlotte. The post professor put up 29 points and 16 rebounds, hitting 13-24 from the field. The Bobcats evened their record for the first time since Nov. 20, when they stood at 6-6. Kemba Walker had 13 points, 10 rebounds and 10 assists for the triple-double, while Anthony Tolliver went 4-5 from 3 off the bench, finishing with 13 points.

Victor Oladipo paced the Magic with 21 points off the bench, but Orlando struggled against the Bobcats’ stingy defense, hitting 35 percent as a team. Nikola Vucevic was a late scratch for the Magic.

Even without two starters, the Raptors were able to close out the Pacers in a statement win. Toronto held off a late charge from Indiana in a tense, Playoff-like matchup, punching back with a 10-0 run to close the game after the Pacers took a two-point lead. Terrence Ross hit for 24, while Jonas Valanciunas put up 22 points and 9 boards and DeMar DeRozan had 20 and 9. The Raps were without Kyle Lowry and Amir Johnson, but didn’t let it phase them against their potential second-round foe.

The Pacers missed their final seven shot attempts, as they yet again failed to close out a game due to poor execution. Paul George scored 26 points on 7-17 shooting and David West had 21. Indy has dropped three of their last four games against fellow Eastern Conference Playoff teams.

On the verge of losing their Playoff spot – which GM Danny Ferry has proclaimed he’s indifferent toward – the Hawks crushed Cleveland, one of the teams chasing them. Mike Scott scored 26 points, hitting the 20-point mark for the first time in a month, and Jeff Teague put up 20 points and 12 assists to lead Atlanta. Paul Millsap had a double-double of his own with 16 points and 11 rebounds, chipping in 6 assists as well.

The loss all but ends the Cavaliers’ hopes at sneaking into the postseason, as they now sit three games behind the Hawks for 8th after getting swept 3-0 in the season series. Dion Waiters led the Cavs with 23 points and Spencer Hawes put up 16 points and 10 boards. Kyrie Irving finished with 13 points in his second game back from a biceps tear.

Philadelphia is setting the league ablaze (relatively) from the bottom of the standings, winning their second game in four tries following their record-tying losing streak. Michael Carter-Williams posted 24 points, 6 rebounds and 6 assists in his hometown and Henry Sims scored a career-high 24 points, hitting 14-18 shots at the free throw line, while pulling down 9 rebounds. Thaddeus Young and Elliott Williams both scored 15 points for Philly.

The Celtics have dropped seven straight games, and lost to the Sixers for the second time in a row – they were the last team Philly beat before their losing streak. Rajon Rondo recorded a triple-double with 11 points, 11 rebounds and 16 assists to lead Boston.

Brooklyn unleashed a barrage of 3-pointers on the hapless Pistons, coasting to a home win that allowed them to get some rest. The Nets connected on 15-31 from deep, with Mirza Teletovic (20 points) dropping in 6-10 shots from beyond the arc. Shaun Livingston topped the scoring column with 23 points on 11-14 shooting, getting the longest run on the team with just 32 minutes played. Paul Pierce had 17 points on 6-9 shooting (3-5 on 3-pointers) and Marcus Thornton dropped 15 points off the bench and hit 3-5 from long range.

Andre Drummond was a beast for the Pistons, going for 23 points and 18 rebounds – half of them on the offensive end. Josh Smith put up 17 points on 7-13 shooting, knocking down a whopping 4-8 of his jumpers. As it has been all season, Detroit’s defense was a mess; the Nets scorched them for 60.5 percent shooting on the night, getting whatever look they desired.

The Heat failed to put the Timberwolves away and fell short when a jumper by Ray Allen (10 points) drew iron at the buzzer of the second overtime. Kevin Love (28 points, 11 rebounds) missed potential game-winners at the end of regulation and the first OT, but scored 9 of his points after regulation ended to lead the Wolves. All five Minnesota starters reached double figures in scoring, including a double-double from Ricky Rubio (14 points, 13 assists) while Chase Budinger dropped in 24 off the bench.

Miami missed several opportunities to close game out, two of them with Mario Chalmers missing a free throw at the end of both the fourth quarter and the first OT. Chris Bosh (24 points, 9 rebounds) drained a clutch 3-pointer to tie the game with 10 seconds to go in the second overtime, but Norris Cole committed a silly foul on a Corey Brewer jumper right after. LeBron James struggled at times in the second half, showing some signs of frustration, but still finished with 34 points, 8 rebounds, 5 assists and 4 steals while hitting 12-24 from the field. He also became the youngest player ever to reach 23,000 career points – possibly the reason he rocked his “Happy” Pharrell hat after the game. The Heat remain even with Indiana at the top of the East.

Bradley Beal showed why it won’t be long before both members of the Wizards’ backcourt are considered All Stars, drilling a game-winning jumper in between three Knicks to seal a win for Washington, the second time this year he’s done that against New York. Beal finished with 28 points to lead the Wiz, shooting 12-22 despite going 1-8 from deep. John Wall put up 19 points and dished out 9 assists as the Wizards took advantage of a string of New York miscues. Super-spy Marcin Gortat didn’t get busted gathering intel, but did post a double-double with 13 points and 10 rebounds.

The Knicks slid right back out of 8-seed as their superstar had one of his worst games of the season. Carmelo Anthony nearly had as many turnovers as points, scoring 10 on 5-14 shooting while coughing up the rock nine times. He committed 4 TOs in the fourth quarter, including giving it away on three straight possessions with the margin at just one point. J.R. Smith had 32 points and hit 8-16 from long range but missed a wild shot at the buzzer.

Chicago pounded the Bucks at home, overcoming poor shooting (even for them) to keep pace with Toronto for the 3-seed in the East. The Bulls hit just 37 percent from the floor, but abused Milwaukee on the glass, grabbing 16 offensive board and taking 16 more shots than the Bucks as a result. Joakim Noah had 11 points and 13 rebounds, while Jimmy Butler and Kirk Hinrich scored 17 apiece. Carlos Boozer also posted a double-double with 14 points and 11 rebounds.

Brandon Knight put up 22 points to lead Milwaukee, while Jeff Adrien had 21 points and 9 rebounds.

The Jazz pulled out a close win over the Pelicans, who at this point seem lucky to be able to field a full lineup. Gordon Hayward put up 21 points to lead Utah, getting to line and knocking down 11-13 freebies. Alec Burks had a similar line off the bench, also posting 21 points while hitting all 13 of his shots at the line. The win ended a five-game losing streak for the Jazz.

Anthony Davis (8 points, 6 rebounds, 2 blocks) played just 23 minutes, as his back spasms flared up. Anthony Morrow scored 26 points on 9-11 shooting off the bench to lead the Pelicans, while Tyreke Evans (8 points, 3-11 shooting) had a rough night.

Houston clinched a Playoff berth with their 50th win of the season, topping the Thunder in an up-and-down shootout. James Harden went nuts against his former team after struggling in their previous matchups this season, going for 39 points, 9 rebounds and 7 assists. The Rockets used a 7-0 run late to take a six-point lead that they wouldn’t give up. Chandler Parsons had 23 points in support of Harden, while Terrence Jones (16 points, 11 rebounds) put up a double-double. Neither team was all that interested in playing defense, but shooting percentages suffered (42 percent for Houston, 45 percent for OKC) thanks to all the running and gunning.

Both teams played without a superstar and a top perimeter defender, as Dwight Howard and Patrick Beverley sat for the Rockets and Russell Westbrook rested for the Thunder, while Thabo Sefolosha is still recovering from calf injury. Kevin Durant (28 points, 7-19 shooting, 12 rebounds, 6 assists) didn’t play particularly well by his standards, but extended his 25-plus scoring streak to 40 games, tying Michael Jordan’s feat. He did hit two triples in the final minute to keep the Thunder in it, but couldn’t get a third to go to win it. Serge Ibaka posted a career-high 27 points, also grabbing 9 boards and picking up 6 blocks, while Reggie Jackson had 17 in Westbrook’s place.

The Suns raced away from Portland in the second half, getting a necessary win to hold ground in the standings. Gerald Green exploded for 32 points, scoring 18 in the second half as Phoenix erased a 10-point deficit in the third quarter. Eric Bledsoe poured in 30 points of his own, while Goran Dragic finished with 19. Despite the win, the Suns are still ended the night on the outside looking in on the postseason, thanks to tiebreakers with Memphis.

The Blazers got double-doubles from Robin Lopez (18 points, 13 rebounds) and Nicolas Batum (13 points, 11 rebounds). LaMarcus Aldridge dropped in 18 as Portland finished their season series against the Suns at 1-3.

Golden State laid waste to Sacramento, effectively ending the game by the time the buzzer sounded for the first quarter. The Warriors held the Kings to just 27 points in the entire first half and set their season-best mark by holding them to just 69 points on the night, the least Sacto has scored this year. Klay Thompson scored 21 to lead the Dubs, while Harrison Barnes had his best game in what feels like ages with 16 points off the bench. Stephen Curry played under 30 minutes, scoring 12 points as the Warriors led by as many as 42 in the second half before pulling the starters. Marreese Speights had 12 off the bench and hammered down a massive dunk with the game well in hand:

DeMarcus Cousins had 18 points 10 rebounds for the Kings, who shot a measly 32 percent on the night. The Kings haven’t beaten a Western Conference Playoff team in nearly three months.

Dallas completed a Staples Center sweep, handling the Lakers on the second night of a back-to-back set in Los Angeles. Dirk Nowitzki continued his climb through the history books, passing Dominique Wilkins for 11th on the all-time scoring list. Nowitzki dropped in 27 points on 11-14 shooting, knocking down his usual array of twisting and falling midrange jumpers. Brandan Wright was a perfect 10-10 off the bench, scoring 23 points, while Samuel Dalembert had a double-double with 14 points and 14 boards. Monta Ellis struggled shooting the ball for the second straight night, going 3-13 en route to 8 points and bringing his total for this trip to Staples to 7-25 from the floor. The Mavs held on to sole possession of the 7-seed in the West, as their two competitors both won as well.

Jodie Meeks had 25 points to lead the Lakers and Nick Young dropped 14 off the bench before suffering a leg injury. The Mavs swept the season series, going 3-0.