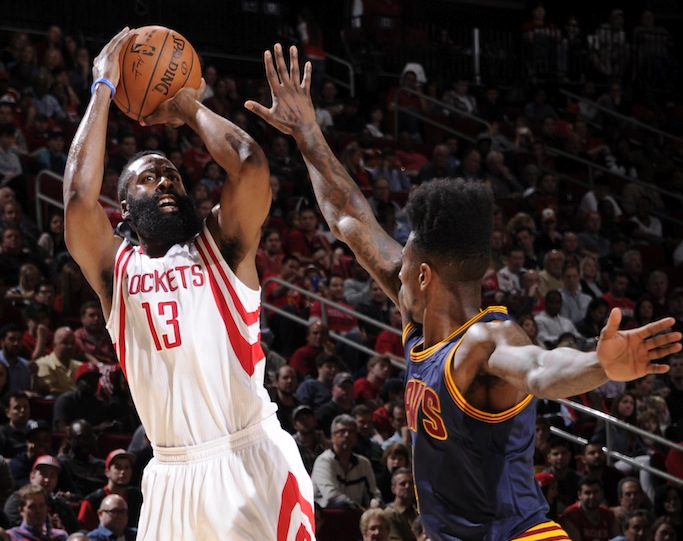 This was not the most entertaining matinee of all-time. Neither team looked particularly sharp, but a strong fourth quarter by LA closed out a win.

Chris Paul was great, tallying 28 points, 12 dimes and just one turnover. DeAndre Jordan snatched 26 boards, and is now averaging better than 14 per game on the season.

Chicago got 29 from Nicola Mirotic, who might have a case for Rookie of the Year if not for Andrew Wiggins’ incredible season. Meanwhile, Pau Gasol (2/13) struggled badly and Jimmy Butler exited early with an elbow injury and didn’t return.

On the other hand… fantastic game. LeBron and James Harden went back and forth for much of the day, though James (15/35) was never able to shift into second gear offensively. He had a chance to give Cleveland the lead in the closing seconds of OT, but uncharacteristically missed a pair of free throws.

Harden hit 8/18 shots and 15/18 free throws for 33 points to go with 8 boards, 5 assists and 3 steals. It’s tough to argue against him for MVP right now (though if Golden State can maintain separation atop the West, I like Curry). Terrence Jones dropped 19 and 7 in the win and has been tearing it up since the All-Star break.

LeBron managed 37 points, 8 boards, 4 assists, 3 steals and 3 blocks in the loss. He shot just 3/11 from the stripe, so basically 37 points and a bunch of other stuff is the worst LeBron can do when he decides to be aggressive. Kevin Love added 21, while Kyrie Irving sat with a shoulder injury.

Rudy Gay led Sacramento with 24, and, far more amazingly, Andre Miller logged 26 minutes and recorded a double-double: 12 points and 10 dimes. He might get serious run under George Karl with Darren Collison likely out for the rest of the season.

The Celtics jumped way ahead last night—56-30 in the mid-second—before crashing back down to earth. Golden State caught fire in the second half and pulled out a crazy comeback W.

Each Boston starter scored double-figures, but it was Isaiah Thomas who led the team in scoring with 20. His partner off the bench, Jae Crowder, grabbed 17 boards in the funky loss.

Last night the Sixers made Indiana look like the 2014 Finals Spurs.

George Hill led all scorers with 17.

The Lakers typically play relatively well on Sunday nights, and last night was no exception. They hung around with the KD/Westbrook-less Thunder for a while, but ran out of gas late.

OKC’s newcomers (plus Serge Ibaka) were in charge for a day, and stepped up nicely. DJ Augustin and Ibaka (14 boards) each scored a team-high 18, while Enes Kanter added 16 and 15. He’s been a monster since coming over from Utah.

Jeremy Lin led the Lakers with 20 points off the bench, and Jordan Hill posted 14 and 12.

Orlando pulled within four with under ten minutes left last night before getting boxed out by the Hornets.

Mo Williams played a huge 38 minutes, dropping in 23 points with 11 dimes. He’s been the perfect replacement for Kemba Walker so far, and a sweet low-key pickup. Al Jefferson added 16 and 10.

Victor Oladipo was great in his 38 minutes, scoring 21 points on 7/14 shooting in the loss.

The Pelicans needed big games from Tyreke Evans and Eric Gordon with Anthony Davis, Ryan Anderson and Jrue Holiday all on the shelf, and the wings delivered. Tyreke went for 22, 7 and 7 while getting to the stripe 11 times, and Gordon poured in 18. Omer Asik added a very Asikian 16 boards while hitting 3/5 shots from the floor.