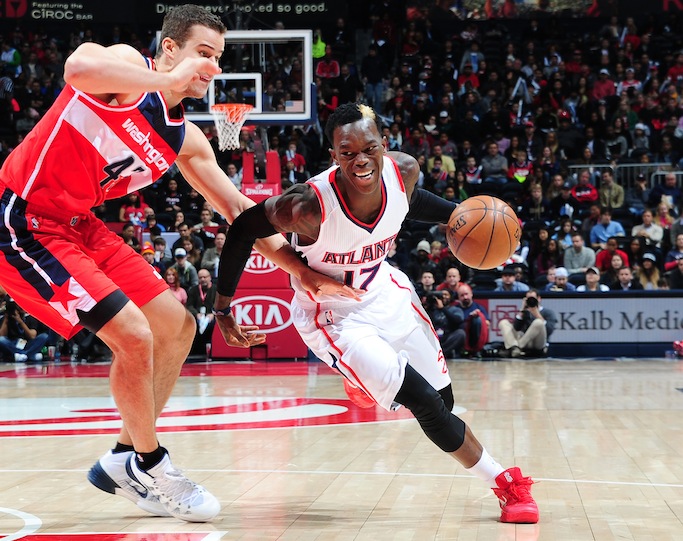 The Hawks are damn scary. Once 5-5 in a distant past, they’ve now won 24 of 27, ripping through the likes of the Bulls, Rockets, Mavs, Blazers, Clippers, Grizzlies and now Wizards on the way.

Last night, they got double-figures from eight different players, with Kyle Korver (19) leading the charge. Jeff Teague double-doubled with 11 and 10. It’s an unbelievably balanced team that can snipe from deep (16/31 last night) and do work inside through Al Horford and Paul Millsap.

John Wall led the Wizards with 15 and 8 in the ugly road loss.

The Heat aren’t exactly the League’s top dog anymore, but they can still get up for a big game. They did it against Cleveland on Christmas and again yesterday in LA.

Chris Bosh dropped 34 in the surprise win, and Dwyane Wade added 17 and 10 assists.

Meanwhile, Hassan Whiteside posted 23 and 16 with a pair of blocks in 29 minutes. He’s rejected at least two shots in six straight and has scored double-figures in four straight. Not a bad basement find for Miami in a League where Timofey Mozgov costs two first-round picks.

Blake Griffin hit 10/19 shots on his way to 26 points, and Chris Paul tallied 23 points and 9 assists. The Clippers were within eight with eight minutes left, but stalled after that.

A late rally by the Suns and a buzzer-beating miss by the Grizz sent this game into OT last night in Memphis.

In the fifth period, again Memphis jumped ahead, and again Phoenix battled back. Eric Bledsoe had a chance to win it at the horn for Phoenix, but couldn’t convert. Double OT.

Finally, in the sixth period, the Grizzlies ran away with the game for good. They outscored Phoenix 14-2 for the rare double-digit, double-overtime win.

Zach Randolph dominated to the tune of 27 and 17, though he fouled out in 42 minutes. Mike Conley added 25, and Courtney Lee dropped in 18. Marc Gasol scored the first six points of the second overtime period, and finished with 12 and 9 with 4 rejections.

Last night was an easy win for the Kings, paved by their stars. DeMarcus Cousins was unstoppable, finishing with 26 points, 13 boards, 5 assists, 4 steals and 3 blocks. Rudy Gay dropped 23, and Darren Collison added 16 and 6. The Kings committed just 5 turnovers.

Nearly some Sunday Night Staples Center Magic last night, as the Kobe-less Lakers were tied up with Portland early in the fourth. Predictably, though, the Blazers got hot, the Lakers went cold, and Portland ran away with the W.

Damian Lillard dropped a game-high 34. Wes Matthews (16), LaMarcus Aldridge (15 and 9), Nic Batum (11, 9 and 6) and Chris Kaman (9 and 12) all chipped in nicely. Kaman’s given them some strong minutes this year following his failed stint with the Los Angeles last year.

Wes Johnson led the Lakers with 17. Swaggy P hit just 3/11 shots (1/8 from three), which is nearly impossible for LA to overcome without the Mamba.