The Toronto Raptors paid homage to the Huskies, Jimmy Butler got buckets and more from Saturday. 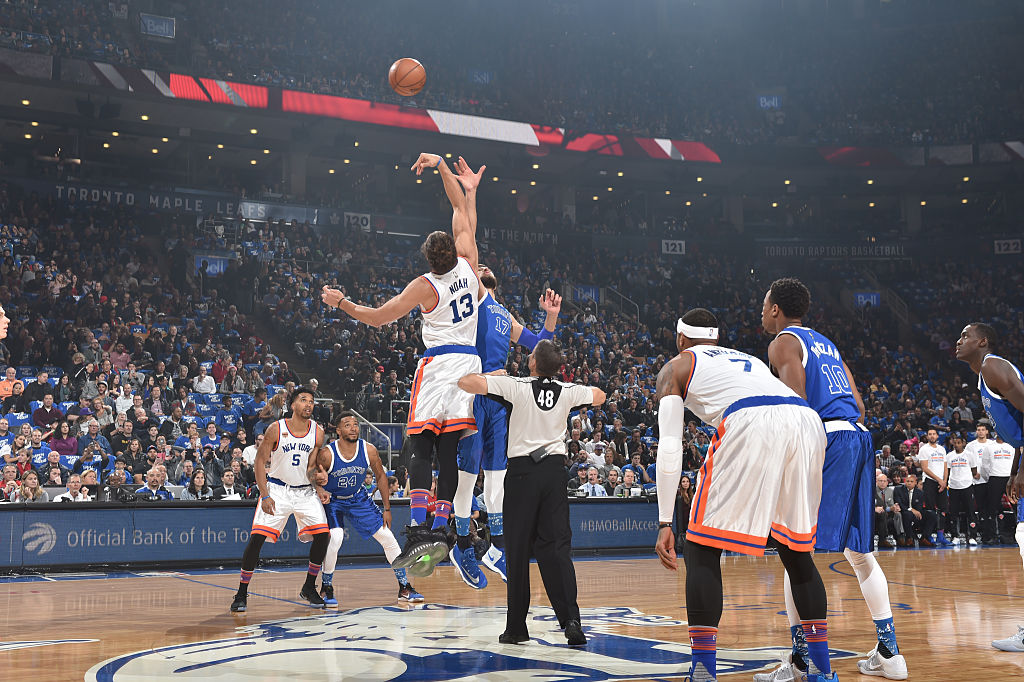 The Raptors paid homage to the 1946-47 Toronto Huskies in tonight’s match-up against New York, even decking out the Air Canada Centre to show appreciation.

DeMar DeRozan continued his lights-out shooting with a 33-point night, while Kyle Lowry pitched in 16 points. The Knicks have stumbled out of the gate to a 3-6 mark, despite 18 boards from Joakim Noah and 31 points from Carmelo Anthony. Frank Isola of the Daily News summed it up nicely:

This defensive thing ain't working out for the Knicks.

Jimmy Butler has found his stroke, and the rest of the league should take notice. Butler has now posted 96 points over his last three games, including Saturday’s 37-point showing.

The Wizards will be hard-pressed to compete without John Wall and Bradley Beal on the court.

James Harden’s triple-double wasn’t enough to stave off Kawhi Leonard and the Spurs. As has been the case of late, coach Gregg Popovich has garnered as much attention for off-court remarks than his team’s first place start.

After missing the season’s first six games, it would have been easy to forget about Gordon Hayward’s impact on the Jazz. The 26-year-old has eclipsed 20 points in each of his five games since returning, however, lifting Utah to second place in the Northwest Division.

Miami, meanwhile, sputtered to their sixth loss of the season. With Beno Udrih on the sidelines, Erik Spoelstra had to get creative with his rotations; starting Josh Richardson at the point.

Has anyone predicted this start from the Clippers? Blake Griffin and DeAndre Jordan each double-doubled in an impressive W over Karl-Anthony Towns (24 points, 10 boards) and the T’Wolves.

Not even DeAndre Jordan? High praise from Doc https://t.co/rQx2IpLEjf

Giannis Antetokounmpo is on another level. The Greek Freak poured in 27 point with four steals and four blocks, while offseason acquisitions Tony Snell and Michael Beasley added a combined 28. Meanwhile, Vince Carter (17 points off the bench) showed he still has hops:

The #FreeAD campaign is only going to grow stronger with each Pelicans loss. Alvin Gentry’s squad allowed a 42-point fourth quarter from the Lakers, getting blown out by one of the league’s younger teams. Archie Goodwin appears to be a nice pick-up and Buddy Hield found his stroke in this one, but the Pels are otherwise going nowhere fast.

The Celtics continue to stay afloat without the services of Al Horford. Isaiah Thomas scored a game-high 23 points, knocking off the Paul George-less Pacers. James Young pitched in with 5-of-6 shooting from off the bench.

The Sixers felt Joel Embiid’s absence (night of rest), as they sunk to 1-8 against Tim Hardaway Jr. and the Hawks. Hardaway posted 20 points while Dwight Howard double-doubled.

The Nuggets received a stellar performance from Emmanuel Mudiay and a highlight-reel dunk from Danillo Gallinari, but the Pistons shot 51.1% from the floor in Saturday’s W. Jon Leuer pitched in with a double-double off the bench; the first double-double recorded by a Pistons reserve player this season.

T.J. Warren’s breakout campaign continued with 18 points and three steals, but the Nets were led by Rondae Hollis-Jefferson (20 points, double-double) and Joe Harris (career-high 19 points). Who would have guessed that the Nets would be outplaying the Knicks by this point of the year?