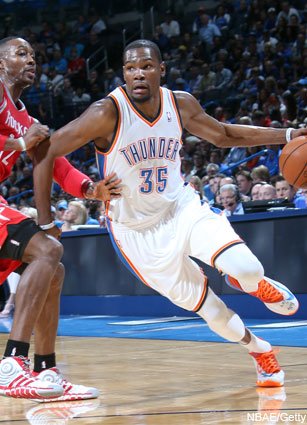 Two of the feistiest point guards in the League faced off for the first time since Patrick Beverley bumped knees with Russell Westbrook and knocked him out of the 2013 postseason. This time, it was Westbrook and the Thunder who got the last laugh, as Beverley had two points and five fouls while Westbrook put up 24 points, 7 assists and 4 steals.

The real story of the game was Kevin Durant, who poured in 42 points. His hot shooting helped Oklahoma City end a two-game skid while putting some distance on a Western Conference foe slowly creeping up the standings. The Rockets couldn’t win their sixth in a row, because other than James Harden (28-8-9) and Francisco Garcia (11 points on 4-5 shooting), the rest of the team failed to generate any offense. Dwight Howard had just nine points (4-12 from the floor) in the loss.

A Memphis win coupled with a Dallas loss on Tuesday night moved the Grizzlies up to the No. 7 seed in the ever-changing Western Conference.

Damian Lillard led all scorers with 32 points, but LaMarcus Aldridge, Wesley Matthews and Nicholas Batum combined to shoot 14-43 (32 percent). Not exactly a banner offensive night for the second highest-scoring team in the NBA. Portland has lost four of its last five games.

The Spurs have the best record in the NBA and picked up their seventh straight win on Tuesday in Chicago against the scrappy Bulls.

The final score wasn’t a real reflection of how well San Antonio played—the Spurs were outscored 30-14 in the fourth quarter when the game was largely decided. Tony Parker has been on a tear since his return from injury, scoring 20 points to go with 9 dimes. Kawhi Leonard was as steady as ever with 16 points and 9 rebounds, and Manu Ginobili put up 22 points on 9-11 shooting off the bench. San Antonio utilized 13 players in total.

D.J. Augustin and Jimmy Butler were the unsung heroes of Chicago’s backcourt, combining for 47 points. Other dependable role players like Taj Gibson and Kirk Hinrich were off their game though, and Chicago’s cold shooting for the first three quarters doomed their chances.

For the second time this season, Andrew Bynum made his debut to an excited home crowd. In 16 minutes, Bynum had a surprisingly productive outing, putting up 8 points and 10 boards. David West was on fire with 24 points on 11-13 shooting, and the Pacers ended a four-game skid.

In one sequence, Andre Iguodala swatted Shawn Marion’s layup, raced down the court the other way and tip-dunked Stephen Curry’s three-point attempt. Iguodala’s effort was indicative of Golden State’s play on both ends, as the Warriors held Dallas to 36 percent shooting while scoring at least 108 points for the fourth straight game.

The Warriors are 10-2 since Feb. 19, sitting solidly at sixth in the Western Conference standings. They’re just 1.5 games back of the Portland Trail Blazers.

The Mavericks had a night to forget. Monta Ellis led the team with 15 points, and Dirk Nowitzki had just 12. Shawn Marion was held scoreless in 26 minutes of action. Dallas is 17-17 on the road and 21-10 at American Airlines Center.

Detroit’s bleak postseason hopes got a slight boost after a strong second half proved to be the difference against the lowly Kings. Josh Smith led all scorers with 24 points, and Andre Drummond did his part with 15 points and 5 blocks. He was also on the other side of a DeMarcus Cousins posterization, but generally outplayed Sacramento’s big man (13 points on 5-15 shooting, 14 rebounds, 5 blocks).

Brandon Jennings made just one of 10 shots, though backup guard Rodney Stuckey picked up the slack with 23 points.The Kings went cold in the third quarter especially, scoring just 11 points. For the game, Sacramento was just 3-15 from beyond the arc. Rudy Gay led the team with 20.

The Timberwolves trailed Milwaukee at halftime but recovered in a big way at the start of the fourth quarter to earn the win at home. Kevin Love had his usual impressive statline (27-10-6) and got some help from Kevin Martin (26 points). JJ Barea provided an additional jolt off the bench with 19 of his own.

The Bucks? Well, they played like the Bucks. Brandon Knight had a nice game with 21 points, but that was about the only bright spot. Milwaukee still “leads” the 76ers for worst record in the NBA by 2.5 games.