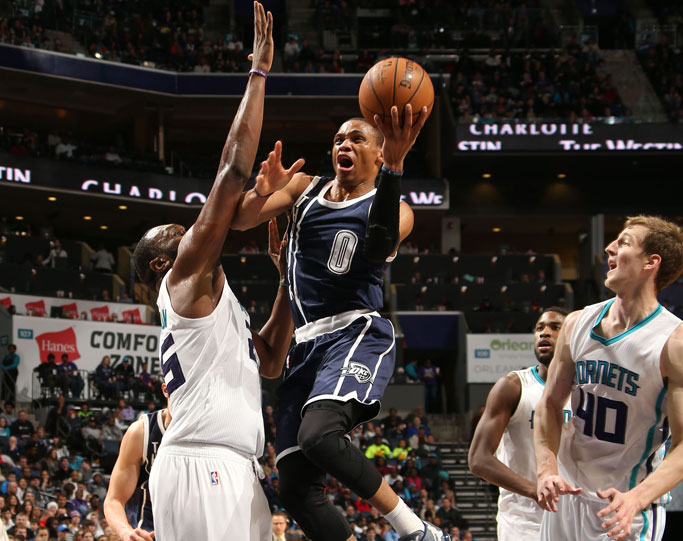 The second half of the season looks bright for the Oklahoma City Thunder. With last night’s road win over the Charlotte Hornets, OKC earned its fifth straight victory behind 33 points, 10 assists and 7 boards from Russell Westbrook.

Big man Serge Ibaka added his own double-double of 16 points and 12 rebounds. Newly acquired Enes Kanter contributed 10 points and 13 boards, and DJ Augustin scored 12 in the win as Kevin Durant rested his foot on the bench.

The Hornets had some success too with their new guy—Mo Williams. He finished with a team-high 24 points and 12 assists, including his 1,000th career 3-pointer:

Despite four starters in double-doubles including a 20-point, 12-board performance from Al Jefferson, the OKC Thunder took the win on the road to continue their charge up the standings in the West.

The Pelicans lost Anthony Davis and Ryan Anderson to injury in last night’s visit to Miami, but what they didn’t lose was the game. Eric Gordon scored 24 points, 16 of which he dropped in the third when the Pels outscored the Heat by 10. Four other men for New Orleans finished in double-figs, including former Heat player Norris Cole with 12 points in his debut.

Goran Dragic also scored 12 in his debut for the Heat, but Miami failed to complete the victory at home, never holding the lead once and trailing by as many as 25 during the night. The Heat will be without Chris Bosh for the remainder of the season due to blood clots on one of his lungs. Get well soon, CB.

The Chicago Bulls earned their fifth win in six games last night against the visiting Phoenix Suns. Pau Gasol finished with 22 points and 14 rebounds, and five other Bulls scored in double-figs for the win to spoil Brandon Knight’s debut with the Suns. Phoenix also had six of their nine players who saw minutes in double-figures, and they shot 53.4 percent from the field but they simply couldn’t convert the numbers to a win, dropping their seventh loss in eight games. They did come close though…with 25.9 seconds left in the game, Markieff Morris sank a 3-pointer to bring Phoenix within a single point. But successful free throws from Derrick Rose (16 points) and Jimmy Butler (19 points) and missed 3-pointers from Eric Bledsoe (13 points) and PJ Tucker (20 points) put the stamp on the end of the game.

The Houston Rockets spoiled the Toronto Raptors’ five-game road winning streak last night by blowing out their visitors from The North. Corey Brewer scored a season- and team-high 26 points to go along with 10 rebounds and 5 steals in the win. James Harden added 20 points, 16 of which came in the third quarter as Houston outscored Toronto 28-17. Harden also dished this sweet behind-the-back pass:

Both teams committed 23 turnovers each, so that wasn’t pretty at all. It was an off-night for Toronto especially who struggled with scoring, only shooting 32.5 percent from the field. That 17-point #3rdQofDoom is what put them away though. James Johnson’s game-high 27 points couldn’t dig ‘em out of the hole at that point.

The Los Angeles Clippers won their match-up against the Sacramento Kings last night in blowout fashion. After trailing by five points at the end of the first quarter, the Clips went off in the second. They put up a whopping 42 points and held the Kings to just 18. In that second quarter, Jamal Crawford (23 points and 6 assists) dished out this nice pass to Austin Rivers (career-high 28 points and 3 steals) for the slam:

After the game, the Clips continued the fun:

DeMarcus Cousins led the Kings with 21 points and Omri Casspi added 11 points and 17 boards for new head coach George Karl, but the Kings didn’t shoot well from the floor. They went 34.1 percent from the field and 25 percent from 3-point land, compared to the Clippers’ respective 48.4 percent and 40 percent.