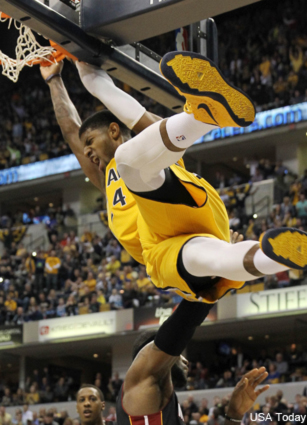 Charlotte pulled out an exciting overtime win over the Nets as both teams battle for positioning in the East. After Kemba Walker (20 points, 12 assists) and Deron Williams (29 points, 7 assists) traded buckets at the end of regulation, the Bobcats took over in the extra frame. Josh McRoberts (12 points) threw down a reverse dunk and Walker drilled a step-back jumper to secure the lead for Charlotte. Al Jefferson dominated all night, going for 35 points and 12 rebounds.

Mirza Teletovic knocked down six 3s off the bench for Brooklyn, netting 20 points, while Joe Johnson poured in 18. This game was Brooklyn’s third straight overtime contest, all on the road over a four-day stretch.

Phoenix picked up a crucial win on the road, fighting off a big Wizards comeback to escape with the W. After the Suns went up 75-50 in the third quarter, Washington took off on a 28-8 run to make it a game before Phoenix was able to close it out. The Suns’ point guard duo was outstanding, with Goran Dragic dropping 25 points and Eric Bledsoe putting up 23 points, 7 assists and 6 rebounds against a former Kentucky teammate.

John Wall, the other Wildcat point guard on the floor, was outstanding, posting 29 points on 10-22 shooting. After Washington whittled the lead to 10 at the end of the third quarter, Wall scored 6 quick points and picked up an assist to get the lead down to four. The Wizards got 17 point from Marcin Gortat, but Bradley Beal struggled, scoring just 8 points on 3-11 shooting, leaving the game temporarily with a hip injury. Washington has lost four of five, while the Suns have won seven of eight since Bledsoe returned from injury.

Toronto edged out the Celtics, adding to their lead in the Atlantic division. Terrence Ross led the way with 24 points, while Kyle Lowry had 23 points and 9 rebounds from the point guard spot. The Raptors held off a late Boston comeback, as the C’s went on a 9-0 run in the fourth and cut the lead down to just 93-90 before Ross and Lowry drilled consecutive 3s to close it out.

Rajon Rondo came back after taking a shot to the face, needing 9 stitches to close a cut, posting 9 points and 15 assists, just missing out on a unique kind of triple-double. Jared Sullinger was the high man in the game, scoring 26 points in the loss.

Dion Waiters continued his hot streak, drilling a tough wing jumper as time expired to give Cleveland the win. Playing without Kyrie Irving, the second-year guard is proving he was worth his draft slot. Waiters scored 18 on Wednesday and is averaging 21 points over the last eight games, six of them played without Irving. Matthew Dellavedova had himself a night, scoring a career-high 21 points off the bench, while Anderson Varejao had 12 points and 16 rebounds in a reserve role.

The Pistons got a strong night from Josh Smith, who for once was knocking down his jumpers. Smoove put up 24 points, 8 rebounds and 6 assists on 11-23 shooting to lead Detroit, who are looking more and more likely to keep their top-8 protected draft pick after starting the season with Playoff aspirations.

Looking at the standings, Minnesota is probably pissed they don’t get to play in the Eastern Conference, and they took it out their frustration on the Hawks. Gorgui Dieng continued his awesome play in place of Nikola Pekovic, putting up 15 points and 15 rebounds in the blowout. The rookie project has played better than anyone could have expected, averaging nearly 13 points and 14 rebounds since getting into the rotation six games ago. Kevin Love put up 14 points and 12 rebounds, Kevin Martin dropped 18 points and Ricky Rubio had 4 points, 10 assists and 6 steals for the Wolves. Ricky was the second point guard to require stitches on the night, getting 15 of them in his mouth after catching an elbow.

Mike Scott had 15 points to lead the Hawks, while Paul Millsap had 12 points and 10 rebounds. The Hawks are 6-18 over their last 24 games, yet they’re still clinging to the 8-seed in the East with just 12 games to go.

The Pelicans picked up an unlikely win, squeaking past the Clippers in NOLA. Anthony Davis had 16 points, 13 rebounds and 6 blocks to lead the way for the injury-depleted Pellies. Anthony Morrow topped the scoring column with 27 points, playing extended minutes in the absence of Eric Gordon. Darius Miller (16 points) was huge off the bench, knocking down two jumpers late to help the Pelicans escape.

Chris Paul was awful playing in his former hometown, going 0-12 from the field and scoring just 2 points, although he dished out 12 assists. Blake Griffin scored 21 points to lead the Clippers, while DeAndre Jordan had 8 points, 16 rebounds and 4 blocks.

The Pacers moved one step closer to reaching their season-long goal of locking down the top spot in the East, getting a hotly contested win over their rivals from Miami. David West (13 points, 9 rebounds, 5 assists) hit the biggest shot of the night, hitting just his fourth 3-pointer of the season with under a minute to go to give Indy a four-point lead. After Chris Bosh (8 points) came back with a triple of his own to cut the lead to one, George Hill missed two free throws to give Miami a final chance with two seconds on the clock. Bosh left a jumper short to let the Pacers off the hook.

This game had everything fans are hoping to see in a potential Playoff series between these two powerhouses. LeBron James was everywhere for Miami, going for 38 points, 8 rebounds and 5 assists. Paul George did everything he could to match him, throwing down a couple of nasty dunks in traffic on his way to a 23-8-4 line. Roy Hibbert was unstoppable early, scoring 13 of his 21 points in the first quarter. Hibbert was able to finish the game despite taking a mighty elbow from LeBron early in the fourth, resulting in a flagrant foul on James.

The physical game featured plenty of questionable calls, from officials incorrectly calling Dwyane Wade, who was unable to finish the game due to muscle spasms in his hamstring, out of bounds on a corner 3-pointer, to double-techs on Wade (15 points) and Lance Stephenson (15 points), to Stephenson’s ejection when he picked up his second tech for what some, including Wednesday’s officials, would describe as taunting. Evan Turner (8 points) stepped up for Stephenson, scoring two huge buckets late to help power the Pacers to the win. These two teams play one more time in the regular season, and hopefully seven more after that in May.

The Spurs extended their winning streak to 15 games, but not before nearly falling apart in the fourth quarter. Tim Duncan showed he can still turn it on when need be, putting up 29 points, 13 rebounds and 5 assists to lead San Antonio, closing the game out by scoring six of the Spurs’ final seven points. Danny Green scored 16 points, hitting 5-9 from deep, before leaving with an injury, while Manu Ginobili, Tony Parker and Tiago Splitter all scored 10 points apiece.

The Nuggets nearly erased a 15-point deficit to start the fourth, beginning the quarter on a 16-6 run. The Spurs’ lead never shrunk below four points, as Denver was unable to complete the comeback. Kenneth Faried led the Nugs with 24 points and 10 rebounds and Timofey Mozgov finished with 14 and 11.

The Knicks nearly suffered a back-to-back embarrassments, narrowly avoiding a collapse against the Kings to get the win. Carmelo Anthony put up 36 points on 12-21 shooting and J.R. Smith (29 points) hit 9-12 from long range to tie a franchise record for New York. The Knicks held a 24-point lead in the third, which the Kings cut down to two points by midway through the fourth. Smith hit two of his triples in the final six and a half minutes of the game, and Melo knocked down a jumper and took care of business at the free throw line to preserve the W. Amar’e Stoudemire chipped in 12 points and 6 rebounds, also hitting a crucial shot down the stretch.

DeMarcus Cousins was a monster for Sacramento, going off for 32 points, 15 rebounds and 8 assists, just missing out on a triple-double. He had a personal 5-0 run late that cut New York’s lead to 96-94. Ben McLemore had 16 points and hit four 3-pointers, while Rudy Gay netted 14. The Kings were without point guard Isaiah Thomas, who sat with a quadriceps injury.

Memphis made a second-half comeback to avoid a bad loss as they fight for a coveted Western Conference Playoff spot. Zach Randolph went for 22 points and 13 rebounds for the Grizzlies, who trailed by 10 at halftime before fighting their way back into it. Z-Bo knocked down the game-sealing free throws with 11 seconds to go. Mike Conley had 19 points and 6 assists, while Marc Gasol had 18 points and 7 rebounds as the Grizzlies stayed a half-game ahead of both Phoenix and Dallas.

Utah’s young frontcourt duo both notched double-doubles, with Derrick Favors going for 22-10 and Enes Kanter putting up a 10-15 line. Gordon Hayward dropped 18 points and Trey Burke picked up his own double-double with 11 points and 10 assists.