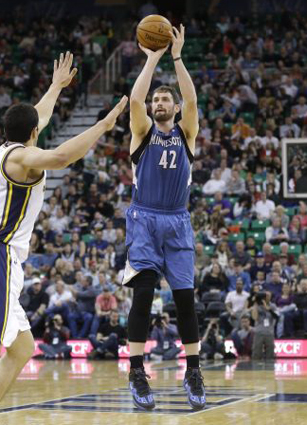 During an odd off-night from Al Jefferson (season-low 6 points, 9 rebounds, 2-13 from the field), Kemba Walker (31 points, 8 rebounds, 5 assists) carried the load for the Bobcats, who are on somewhat of a hot streak. Charlotte has now won four games in a row and is one game out of the five seed in the East. This is an active team that gets after it on both ends of the floor. They give up 96.9 points per game, which is fifth best in the NBA. Saturday night, the Bobcats outscored the Grizzlies 22-10 in second chance points. After being outscored 27-14 in the 2nd quarter, the Bobcats came out of the locker room focused, outscoring the Grizzlies 22-15 behind strong play from Josh McRoberts (12 points) and Gerald Henderson (9 points, 5 rebounds). Mike Conley (16 points, 5 assists, 5 rebounds) led the way for the Grizzlies but missed two potential game-tying 3-pointers in the final 7 seconds. Zach Randolph (12 points, 11 rebounds) had a double-double. The Bobcats get another lengthy break, not playing until Friday against the Spurs (40-16). They’ll need the preparation if they want to continue their streak.

In a game that had 22 lead changes and seven ties with neither team ever leading by double-digits, it ended on a Nene (career-high 30 points, 7 rebounds, 3 steals) dunk with 0.3 seconds left in the game. This capped off one of Nene’s best performances of the year, as Anthony Davis (26 points, 11 rebounds) and Alexis Ajinca (9 points, 9 rebounds) couldn’t hold him early on and in the 3rd quarter. Nene had 8 points on 4-4 shooting in the first few minutes of the game. Anthony Morrow (18 points, 24 minutes) played well off the bench as seven total Pelicans scored at least 7 points. Five Wizards scored in double-figures, with John Wall (10 points, 12 assists) and Marcin Gortat (16 points, 10 rebounds) getting double-doubles. Wall’s penetration into the paint set up Nene’s dunk. This game couldn’t have been closer down the stretch; neither team led by more than 4 points over the final 8:25 of the game. In his first game since being traded, Andre Miller (5 points, 3 assists, 3 rebounds, 16 minutes) helped a Wizards bench that lacks depth.

Mike Scott (career-high 30 points, 8 rebounds) and DeMarre Carroll (career-high 24 points, 6 rebounds) both had career nights against a Knicks team that is now five and a half games out of the eighth spot in the East. Jeff Teague (28 points, 6 assists) also played extremely well. These three Hawks shot 26-40 (65 percent) from the field and 11-16 (69 percent) on 3-pointers. Carmelo Anthony (35 points) did everything he could to will his team to a victory but Raymond Felton (16 points, 10 assists) was the only player that helped out offensively. Tyson Chandler (10 points, season-high 23 rebounds) had a monster game on the boards, grabbing over half his team’s rebounds (41). The Knicks led 52-39 at halftime, and after a Melo jumper with 9:06 left in the 3rd quarter, the Knicks led 58-41. Then the Hawks offensive outburst began as they blitzed for 66 points in the final 21 minutes. That is 3.14 points per minute. Atlanta also went on a 20-2 run between the 3rd and 4th quarter. Scott, Carroll, Teague and Lou Williams (14 points, 9 rebounds, 7 assists) couldn’t be stopped late in this game. Literally. Former Defensive Player of the Year Chandler is no longer a dependable anchor for a defense that goes through inexcusable phases during games this season. The Knicks have lost eight of their last 10 games.

Paul George (32 points, 5 rebounds), David West (season-high 30 points, 7 rebounds, 5 assists) and Lance Stephenson (24 points, 9 rebounds, 8 assists) pushed the Pacers to victory as the Bucks got another big game from Brandon Knight (30 points, 8 rebounds, 5 assists). Knight didn’t get much help from his teammates, though, as the Pacers led by as many as 22 points in the first half. However, with Knight leading the way and contributions from Khris Middleton (13 points) and Ersan Ilyasova (12 points), the Bucks remained in striking distance most of the second half. After Knight threw an alley-oop to Giannis Antetokounmpo (8 points, 6 rebounds) with 7:20 left in the game, Milwaukee only trailed 88-82. This is as close as the Bucks would get the rest of the way. West scored 10 of his points in the final 6:24 of the 4th quarter.

The Mavericks played one of their most complete games of the season against a team that should be playing much better defense with their personnel. For the first time this season, three Mavs had double-doubles—Monta Ellis (12 points, season-high 13 assists, 3 steals, 2 turnovers), Shawn Marion (10 points, 11 rebounds) and Samuel Dalembert (12 points, 11 rebounds, 3 blocks). Dirk Nowitzki (24 points) led the way offensively while Vince Carter (18 points, 6 rebounds, 5 assists) gave a huge punch off the bench. Josh Smith (season-high 32 points, 14-20 from the field, 1-1 on 3-pointers) had a great game due to the fact that he stopped shooting 3-pointers. If only he could learn that he is most effective when he doesn’t shoot the long ball. Smith, though, had no points in the final quarter, when Dallas outscored Detroit 25-20. Dallas also outrebounded Detroit 50-39, as they continue to rebound well of late. Ellis had one of his most complete games as he uncharacteristically didn’t force the ball and played fantastic defense against his former teammate Brandon Jennings (2 points, 1-7 from the field). Greg Monroe (17 points, 17 rebounds) and Will Bynum (17 points, 8 assists) also played well for the Pistons, but their team couldn’t make enough stops. Dallas is now 11-3 in games when Dalembert plays at least 24 minutes, proving his value when he is playing respectable. The Mavs are now 11 games over .500 for the first time this season.

Kevin Love (37 points, 12 rebounds, 10 assists) notched his first career triple-double and continued to play at an MVP-level this season. Unfortunately, his team won’t stop straddling around .500, keeping him from any real contention. The Timberwolves led by double-digits at halftime and continued to build their lead the rest of the way, eventually leading 107-84 after a Dante Cunningham (11 points, 5 rebounds) jump shot. Five Timberwolves scored in double-figures while four bench players had at least 6 points. Enes Kanter (25 points, 7 rebounds) has scored 25 points in each of his last two games while Alec Burks (15 points, 11-14 on free throws) remained a force off the bench. The Jazz just couldn’t stop the Timberwolves from scoring, who shot 51.2 percent from the field (43-84) and 47.8 percent (11-23) from the field. Minnesota outrebounded Utah 49-34 and is now one game away from getting back to .500. The Wolves play the Blazers (37-18) Sunday night.

Seven Kings scored in double-figures as Jeff Green (29 points, 13-18 from the field) could only do so much for the Celtics, who were without Rondo (rest). Ben McLemore (11 points) scored the first four points of the game and his Kings led the rest of the way. Isaiah Thomas (21 points, career-high 12 assists) took advantage of Rondo’s absence, taking it to Phil Pressey (2 points, 2 assists, 4 rebounds) and Jerryd Bayless (16 points, 4 assists). The Kings shot 52.1 percent from the field while the Celtics only shot 39.1 percent. In his return, DeMarcus Cousins (13 points, 7 rebounds, 6 turnovers, 6 fouls) struggles to find his groove but Rudy Gay (22 points, 7 rebounds) helped pick up the slack. Green missed his first 9 shots of the game before coming on strong in the 2nd quarter. Kris Humphries (19 points, 8 rebounds, 2 blocks, 9-15 from the field) played well against Cousins while holding him offensively. Gerald Wallace and Brad Stevens were both ejected late in the game. The Celtics have now lost four games in a row.

The Nets could not buy a shot from long range, finishing 2-21 from the arc (9.5 percent). This is their worst 3-point percentage in more than four years. The Warriors were able to win their third straight game without David Lee (illness) and Andrew Bogut (shoulder). Stephen Curry (17 points, 8 assists, 5 rebounds) wasn’t even key reason the Warriors pulled this one out. The Warriors got some surprisingly strong performances from a suddenly spry Jermaine O’Neal (season-high 23 points, season-high 13 rebounds) and offensively-skilled Draymond Green (career-high 18 points, 10 rebounds). These two lived in the paint and took advantage of the extra time coach Jackson gave them. Andre Iguodala (8 points, 11 rebounds, 6 assists, 4 steals, 1 block) remained the ultimate glue guy as Deron Williams (20 points, 6 assists) led the way for the Nets, who have dropped to eighth in the East. Joe Johnson (15 point, 5-16 from the field) had a tough night shooting the ball. Brooklyn continued to struggle on the glass as Golden State outrebounding Brooklyn 50-39. They also lost the assist battle, 26-11. Marcus Thornton didn’t play for the Nets because of the stomach flu.