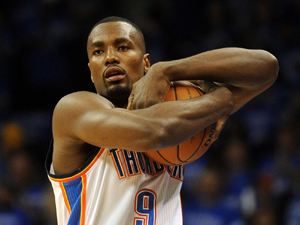 It seems the San Antonio Spurs were on to something last week.

They prepared for Game 1 of the Western Conference Finals as if Serge Ibaka would play. Tony Parker and Co. remained unconvinced of the announcements that the Oklahoma City Thunder forward was likely to miss the remainder of the season with a calf injury. The announcement held true for Games 1 and 2, in which the Spurs blew out the Thunder in San Antonio.

Come time for Game 3, however, Serge Ibaka was in the starting lineup. All those wishes of a speedy recovery did the guy well (and like, the OKC medical/training staff too). He scored 15 points on 6-7 shooting, grabbed 7 boards, and slapped away multiple shots for 4 blocks.

Ibaka’s presence was surely felt. He helped his Thunder out-rebound San Antonio 52-36 and provided an interior defense that held the Spurs to 40 points in the paint—two categories the vets previously dominated in Games 1 and 2.

Naturally, when the points can’t be scored inside, you go outside. Manu Ginobili did just that. He sank 6 three-pointers on 9 attempts to finish the game with 23 points. He had 20 in the first half, which ended with a back and forth three-point shootout between himself and Russell Westbrook. Russ had the final say with this near half-court shot:

Utilizing his three-point shot and other handles, Westbrook finished with 26 points to lead all scorers. Kevin Durant was not too far behind, providing 25 points and 10 boards for the Thunder, who’ve now recorded their first win of the series. So any of you who prematurely took out your brooms, put them away.

Along with Ibaka’s return, another shift in the starting lineup proved beneficial for the Thunder. Off-the-bench energizer Reggie Jackson started Game 3 last night and contributed 15 points.

With only one full day and some hours until Game 4 tomorrow at 9 p.m. EST, Ibaka has much less time to recover from last night (he was noticeably limping after being pulled out in the fourth when OKC comfortably sealed the deal). Nevertheless, his return was heroic and needed. Everyone knows that once a team goes down 3-0 in the NBA Playoffs, the series is as good as over. Ibaka played a huge role in preventing that fate for a team he strongly believes in.