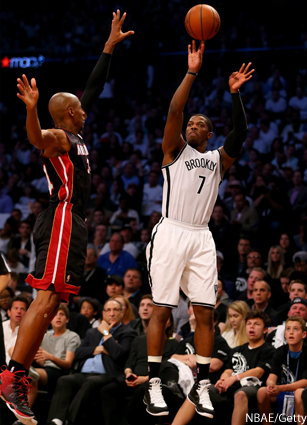 Brooklyn’s win was amazing in a way. A team that looked like it was about to be swept beat the defending champs like there was nothing to it. They drained 15 threes on 60 percent shooting from long range. They completely outplayed the two-time defending champs in the second half of Game 3 on Saturday.

They were literally down 2-0 and playing for their Playoff lives. They’re certainly not out yet.

Before the game, no Net player was in the locker room to talk to media, presumably to gather focus going into the crucial matchup. But during the first quarter, at least, it looked like Miami was going to cruise to another victory. LeBron James was going to drop 40-something. The Nets’ season would be lost in front of their lackluster crowd.

But the Nets deployed their no-so-secret bench weapon in Andray Blatche, who from the moment he entered the game, tore apart the Heat. He cleaned the offensive glass, dream shaked Chris Bosh out of his shoes, got to the line with regularity. Miami had no answer for him. Behind Blatche’s 13 and 6 off the bench, Brooklyn took a 51-50 lead into the half.

And they led for the rest of the game.

The Nets would allow no late surges. No prolonged scoring slumps. They played with confidence. The team didn’t look much like the Nets.

“We’re not scared of them,” Paul Pierce would say after the game.

Kevin Garnett opened the third quarter with an aggressive dribble drive for an athletic layup. Mirza Teletovic continued his hot shooting by knocking down two triples as the score quickly jumped to 74-61. In the third quarter, the Nets would hold Miami to just 13 points on 5-19 shooting. The Heat had just 4 rebounds and 0 assists in the period.

When Teletovic opened the fourth quarter with his fourth trey, right in DWade’s grill, the Flash turned around in obvious disbelief. Twitter went off with a bunch of bad Mirza puns, and the Bosnian had officially arrived.

Alan Anderson hit a three to extend the lead to 85-67. By then, the game was essentially a wrap. But of course, Anderson wasn’t finished. The remaining following three minutes were enough time for Anderson to get tangled up with Ray Allen, throw what looked like a punch (to be reviewed on Sunday by the NBA), and drop another five points.

The Heat were able to bring it to with 11 with 1:50 to play, but two free throws from Deron Williams and a Joe Johnson three-pointer put the lid on a well-balanced Nets performance. Quite possibly their best of the postseason.

Six players scored in double-figures for Brooklyn, who handed Miami their first loss of the 2014 Playoffs.

“Tonight was the type of urgency we’re going to need for the rest of the series,” Pierce said.

Brooklyn most likely won’t be shooting as well as they did from long range, and they won’t be able to expect another poor performance from Miami in Game 4. But they can hope for timely scores and well-executed defense.

“I think this is a must-win coming up Monday,” Garnett said. “If we want to give ourselves any type of room, any type of chance, I think that we’ve definitely got to take care of home.”—Ryne Nelson

These experienced vets in the black and white know exactly how to get ‘er done. The fact they only trailed in this entire series so far for a total of 33 seconds speaks to that.

It’s pretty much been the same song for the first three games of this second round matchup between the San Antonio Spurs and Portland Trail Blazers. Incredible efficiency, offensive prowess, and heavy bench contribution are the reasons to cite when asked why you jumped onto the Spurs bandwagon. I’m kidding. Please—don’t be a bandwagoner…just respect their game.

And really, what’s not to respect when it comes to this team—this group of men who understand basketball, unselfishness, and have such a chemistry that they’re the epitome of the word itself?

Nothing. There is nothing to disrespect. There is only much to learn from.

As one SLAMonline commenter put it, Tony Parker is putting on a clinic and any PG not paying attention is missing out. He finished last night with six assists and 29 points, 20 of which came in the first half.

And then there’s The Big Fundamental, Mr. Timmy D. With all his cleaning up around the basket last night and resulting 17 points, he casually passed Karl Malone to become fifth all-time in Playoffs scoring. No big deal.

The Spurs bench continued to dominate, outscoring the Blazers’ 40-6. While the Blazers started the game strong, the Spurs went on a 16-5 run in the first to hush ‘em up and walk back to the locker room with a 20-point halftime lead.

The 20-point lead quickly dwindled to seven when the Blazers erupted to begin the third quarter with a 17-4 run. But as we previously learned, when their opponent goes on a run, Coach Pop calls a timely break and Spurs storm back with a run of their own.

In case anyone forgot why the San Antonio squad is so motivated, ESPN took the liberty during yesterday’s game to broadcast this same team’s hanging heads from last year’s Game 7 Finals loss to the Miami Heat.

Now, the Spurs are one win away from heading to the Western Conference Finals for the third year in a row. The Trail Blazers are one loss away from burying their season for good. The result will be determined in the Moda Center tomorrow night, 10:30 p.m. EST.