Stephen Curry was brilliant early against the Nets and Reggie Jackson couldn't do anything wrong down the stretch against the Wolves. 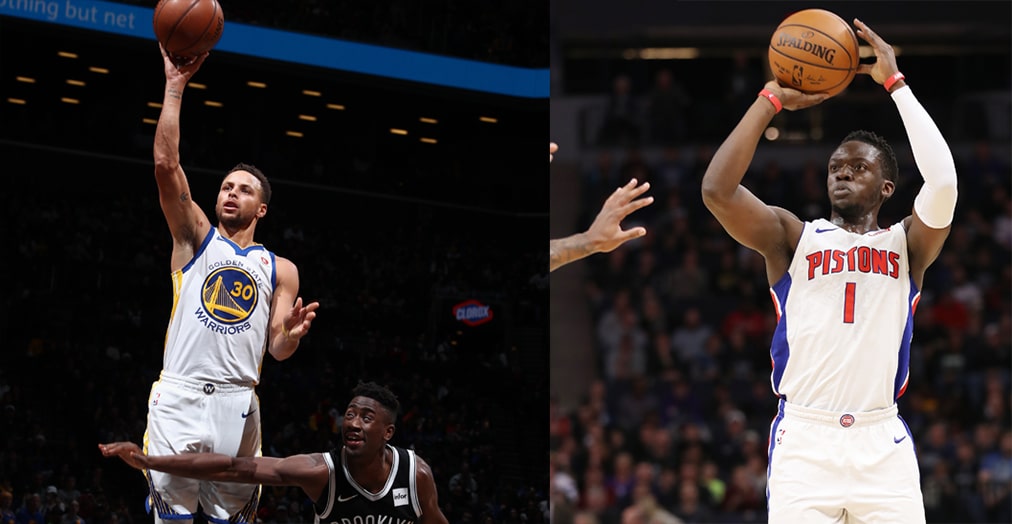 John Wall sat this one out with a sore right knee. Bradley Beal did all he could to pick up the slack for his injured teammate, pouring in 27 points to lead the Wizards. But the visiting team had no answer for DeMar DeRozan. Deebo went off for 33 points, 8 rebounds and 6 assists, helping the Raptors survive a seesaw matchup. There were 11 ties and 17 lead changes before Toronto took over for good in the third quarter.

Myles Turner and the Pacers went off in front of Matthew McConaughey tonight. Turner had 25 points (11-14 shooting) and 7 rebounds, while Bojan Bogdanovic scored 26 and four other Pacers scored in double figures. Domas Sabonis pulled down 10 rebounds and Darren Collison dished out 10 assists.

Stephen Curry caught fire early. He scored 13 in the first quarter and then got 15 more in the third quarter, hitting for 39 points in total before he fouled out with three minutes left in the fourth quarter.

By the time Curry was knocked out of the game, the Nets had cut a 28-point deficit to just 5. With all the momentum in Brooklyn’s favor, Klay Thompson put a stop to the comeback with back-to-back jumpers and Shaun Livingston added two clutch buckets down the stretch to put the pesky Nets away.

The Pistons were trailing by 11 points in the fourth quarter. Then Reggie Jackson started going to work. He shot 4-4 to score 9 points and handed out 4 assists in the game’s final 6 minutes, helping the Pistons turn things around. They clamped down on defense, too, holding the Wolves to 35 percent shooting and just 17 points in the final frame.

Still, Jimmy Butler had a chance to tie the game with 6.2 seconds left after he got fouled while shooting a three. He made the first two free throws then missed the third and the Pistons escaped with another big win. Andre Drummond had 20 points and 16 rebounds.

The BEST down the stretch moments between the @DetroitPistons & @Timberwolves, as #DetroitBasketball overcomes an 11 point Q4 deficit! pic.twitter.com/vqtiDclzCz

The Suns used a balanced team effort to beat the Bulls. They had 32 assists on 45 baskets with TJ Warren‘s 27 points leading the way for the six Suns that scored at least 10 points. Devin Booker added 15 points and 6 rebounds. Bulls rookie Lauri Markkanen continued to impress, registering career-highs with 26 points and 13 rebounds.

Even before Nikola Jokic and Mike Malone were ejected in the second quarter, the Lakers had a hold on the Nuggets. They had a six-point advantage after the first and then they used a 38-22 second quarter to open the game up.

The Lake Show finished the night with 70 points in the paint and 36 assists on 53 field goals.

Lonzo Ball got the second triple-double of his career, going for 11 points, 16 rebounds and 11 assists. Six other Lakers besides Ball scored at least 13 points, led by 24 from Julius Randle.