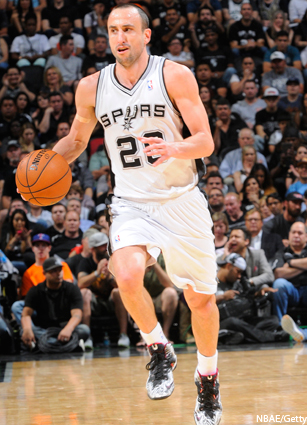 It wasn’t pretty, but the Pacers will take any win at this point. Indiana eked out a tight W over the Pistons, pulling away in the final minute to regain some footing and remain in a virtual tie with the Heat in the race for the top seed in the East. Paul George put together a solid line, scoring 27 points on 9-19 shooting while picking up 13 rebounds and 7 assists, and all five Pacers starters hit double figures. The Pacers are just 4-6 in their last 10 games, but got their offense together somewhat to hit 49 percent in this one.

Josh Smith (24 points, 9-20 from the field, 3-4 from deep) and Brandon Jennings (12 points, 9 assists) both hit triples in the final five minutes that cut the margin to one, but were never able to take the lead. Paul George hitting miracle heaves like this one certainly helped the Pacers keep them at arm’s length:

The Knicks continued a string of blowouts in the Big Apple rivalry, taking care of business against a visibly tired Nets team. The Knicks began to pull away late in the first quarter and and didn’t let up from there, stretching their lead as high as 33 points in the second half. J.R. Smith led the Knicks with 24 points and Carmelo Anthony (24 points, 10 rebounds) posted a double-double. Combined with Atlanta’s loss and their tiebreakers, the Knicks moved into the 8-seed with the win. Tim Hardaway, Jr. had 17 off the bench and Iman Shumpert chipped in 10.

The Nets came out flat a night after beating the Rockets, shooting an even 40 percent from the floor and getting hammered on the glass, 41-23. Joe Johnson scored 16 to top the scoring column for Brooklyn. Jason Kidd pulled the plug early on this one, as no Nets starter played more than 28 minutes.

Cleveland welcomed Kyrie Irving back to the lineup, and the Cavaliers celebrated by administering a beatdown on the Magic. Irving was efficient after missing eight games with a biceps injury, scoring 17 points on 7-8 shooting while dishing out 8 assists. He and Dion Waiters played nice, as the emerging shooting guard led the team with 26 points on 10-15 shooting in 34 minutes. Cleveland shot nearly 58 percent from the field and kept their slim hopes of a Playoff berth alive.

Victor Oladipo led the Magic with 16 points off the bench. Orlando had five players in total hit double figures in scoring, with four of them doing so from a reserve role. Doron Lamb, one of those bench guys, hit 3-5 from deep en route to 14 points.

Toronto held off a hard-charging Rockets squad, pulling out a tight win over Houston. DeMar DeRozan poured in 29 points for Toronto, playing without Kyle Lowry after the point guard banged knees with LeBron James in the Raps’ previous game. The Raptors held an 18-point lead midway through the third, but the Rockets chipped away to get it to 92-91 early in the fourth before Toronto righted the ship. Jonas Valanciunas and Grievis Vazquez both had 15 for Toronto, while Terrence Ross chipped in 14 points and 9 rebounds.

James Harden (26 points) did what he could to keep the banged up Rockets in the game, but had a hard time carrying the offense for stretches late. Chandler Parsons put up 20 and Jeremy Lin scored 16 for Houston, as they played without Dwight Howard and Patrick Beverley.

The Bobcats got Philadelphia started on another losing streak as they dismantled their hosts. Al Jefferson kept rolling after winning Easter Conference Player of the Month in March, posting 25 points and 10 rebounds in just 31 minutes on the floor. Anthony Tolliver (16 points, 8 rebounds, 5 assists, 4-7 from 3) and Chris Douglas-Roberts (14 points, 3-5 from deep) provided shooting off the bench to help power the ‘Cats, and Gerald Henderson put up 14 points playing in the town where he played his high school ball.

It didn’t take long for the Sixers to get back to being themselves, as they dropped their second straight after snapping their record-tying 26-game skid. Philly hit 4-18 from long range while getting crushed on the glass, 47-32. Michael Carter-Williams led the team with 22 points on 10-18 shooting.

The Wizards clinched their first trip to the postseason since 2008, running away from the Celtics in D.C. Marcin Gortat, acquired before the season to anchor the middle for Washington, scored 22 points and pulled down 8 rebounds. Gortat also played the role of Polish spy for the Wiz:

Swingmen Bradley Beal (19 points) and Trevor Ariza (18 points) were both efficient, combining to hit 14-21 from the field, while John Wall notched a double-double with 13 points and 10 assists, setting the tone for the Wizards as always. Washington could hardly miss, hitting a blistering 62.5 percent from the field on the night.

Jared Sullinger put up 25 to lead the Celtics, while Rajon Rondo went for 13 points, 7 rebounds and 6 assists. Boston has dropped six straight games.

The Bulls did their part in abetting the Hawks’ late-season collapse, holding Atlanta at bay for the entire second half. D.J. Augustin continues to be a revelation off the bench for Tom Thibodeau’s bunch, as the diminutive point guard led Chicago with 23 points. Kirk Hinrich and Jimmy Butler scored 17 points each, while Joakim Noah had 10 points, 10 rebounds and 6 assists.

The loss for the Hawks dropped them out of the current Playoff picture and secured them a losing record for the first time since 2008. Paul Millsap had 22 points and 11 boards for ATL and Jeff Teague put up 21 points and 8 assists. The Hawks have lost seven of eight, with the lone win coming against the lowly 76ers.

Miami rolled to an easy win despite sitting several key players, keeping pace with Indiana at the top of the East. LeBron James had 17 points (7-12 shooting) and 8 assists in under 30 minutes for the Heat, who sat Dwyane Wade, Ray Allen and Greg Oden as they try to get healthy and rested for the postseason. Chris Bosh (15 points, 7-13 shooting) and Mario Chalmers (14 points, 6-8 from the field) were just as efficient as the reigning MVP, as the Heat shot 50 percent overall.

Ramon Sessions dropped 19 points as the high scorer in the game, while Zaza Pachulia had 8 points to go along with his 16 rebounds. Thanks to the Sixers’ win last weekend, the Bucks have a two-game cushion in the race for top odds in the draft lottery.

It’s too little, too late, but the Timberwolves have been clicking as of late. They played spoiler against the Grizzlies, handing Memphis a tough loss as they battle for a postseason spot. Kevin Love posted his second triple-double in four games, finishing with 24 points, 16 rebounds and 10 assists, while Kevin Martin chipped in 21 points. The Wolves had no problem dealing with the Grizzlies’ tough defense, shooting 53 percent on the night. Gorgui Dieng had 8 points and 9 rebounds, and reserve Ronny Turiaf had 11 points.

Memphis shuffled around in the Playoff picture with the loss, but finished the night sitting as the 7-seed in the tightly packed bottom of the West. Marc Gasol had 18 points and Courtney Lee hit 6-9 from the field for his 14, but the rest of the Grizz struggled, with the team shooting 42 percent on the night.

Gregg Popovich’s beautiful black-and-silver machine keeps on chugging. The Spurs won their franchise-record 19th straight game, breezing past the Warriors in San Antonio. Tony Parker (18 points, 8 assists) and Tim Duncan (15 points, 8 rebounds) both sat the entire fourth quarter of the blowout. The engine was humming for San Antonio all night, as open jumpers and paths to the basket were readily available. In all, six Spurs scored in double figures and the team shot 53 percent on the night. Manu Ginobili had 13 points, 6 rebounds and 5 assists, while Kawhi Leonard had 11 points and 4 steals.

As good as they are on offense, the Spurs did a pretty good job of flustering the Warriors at the other end. They harried Stephen Curry (11 points, 10 assists) into 5-15 shooting. Marreese Speights came off the bench for the Warriors, very thin up front these days, and scored a game-high 22 points. Already missing David Lee and Andrew Bogut, the Dubs got just four minutes from Jermaine O’Neal. Andre Iguodala also sat this game with a sore knee.

In a season of disappointment, the Nuggets harkened back to the long lost days of 2013 and blitzed the Pelicans in the Mile High City. Kenneth Faried put up a career-high 34 points (14-19 shooting) to go along with 13 rebounds and 3 blocks as Denver shot 56.5 percent and knocked down 15-27 from long range. The Nuggets never trailed after taking the lead midway through the fourth quarter. Aaron Brooks was a microwave off the bench, finishing with 24 points on 9-12 shooting, including 6-8 from behind the arc. The Nugs will finish with a losing record for the first time since 2003, the season before they drafted Carmelo Anthony.

The injury bug keeps biting the Pelicans: world-destroyer Anthony Davis had back spasms early on and didn’t play in the second half of this blowout. Tyreke Evans, who averaged 20 points and 6.7 assists in March, kept up his stellar play with 27 points (9-17 shooting) and 8 boards.

Adding another accomplishment to their relatively barren franchise history, the Clippers dug themselves out of a big hole in the third quarter and topped the Suns, clinching their second straight division championship in the process. The Suns led by 13 at the end of the third, but L.A. ratcheted up the defense late. Chris Paul (20 points, 9 assists) hit a late 3-pointer to retake the lead for the Clips, while Darren Collison and Blake Griffin (23 points each) led the scoring assault. Blake also assaulted just about everyone on the court, including DeAndre Jordan, with a ridiculous putback dunk in the first half:

With the Grizzlies losing earlier in the night, the Suns missed a chance to give themselves a bit of a cushion in the West. Phoenix sat in ninth at the end of the night, although tied record-wise with both Memphis and Dallas. Of the nine Suns who played, eight scored in double figures, with the outlier only logging four minutes of playing time. Marcus Morris led the balanced attack with 16 points off the bench, Gerald Green hit for 15 and Eric Bledsoe had 14 against his former team. Goran Dragic, Phoenix’s leading scorer, struggled all night, hitting just 2-11 from the field. He finished with 15 points thanks to getting to the line frequently, knocking down 11-12.

Rookie Ray McCallum is making the most of his minutes with Isaiah Thomas out of the lineup, helping lead the Kings to a win over their former rivals. McCallum put up a career-high 27 points (12-22 shooting) against the Lakers, while Rudy Gay dropped a game-high 31 in the win. DeMarcus Cousins was plagued with foul trouble the entire night, but made the most of his limited minutes; Boogie Smooth rumbled for 20 points and 10 boards in just 21 minutes after picking up three early fouls.

It’s nothing new, but the Lakers were woefully short-handed in Sacramento. Pau Gasol had a recurrence of vertigo and missed the game, while Chris Kaman, Steve Nash and Xavier Henry also sat. Jodie Meeks went for 21 points, Jordan Hill (18 points, 15 rebounds) recorded a double-double and Nick Young dropped 17 off the bench.