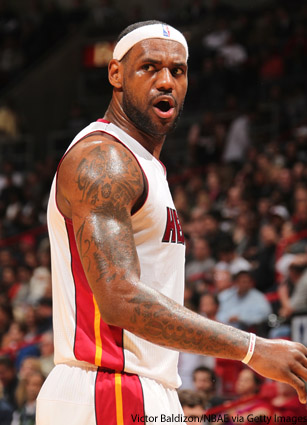 With the red hot Heat going against the freezing (blue?) cold Hornets, it was surprise to tune in and see this matchup so close at the half. Well, that lasted until the final minutes of the following quarter, when Miami decided to get all “Yo! We have LeBron and DWade! LOL!” on the Hornets, jumping ahead with a big run that lasted well into the fourth. Really sad to see the Bees’ reborn excitement evaporate these past few weeks, and with the ownership issues only adding to the problems, something tells me a couple of big changes might be headed for New Orleans. David West, somewhat surprisingly, played great, going for 26 and 11—though he disappeared in the fourth, as did his entire team. The Heat earned the victory behind 75 combined points from The Three, and the South Beach Squad has now compiled a nine-game winning streak. They’ll look to hit double digits Wednesday night against the Cavs. Let’s just skip that prediction stuff and move along.

Good defense or bad offense? Probably a little of both, but regardless, this was a sloppy one. Portland (who shot 37.8 percent from the floor) played well in the third quarter, coming back after the half and bringing a three-point lead into the fourth. But they couldn’t close, and the Grizzlies (who shot under 40 percent from the floor as well) dominated the last segment, outscoring the Blazers 25-9 in the final quarter and snatching the W.  Zach Randolph’s beastly tendencies surfaced yet again, as Z-Bo dropped 25 points and grabbed 20 rebounds.

With Danny Granger (ankle) sidelined, the Pacers were no match for the Bulls, who exploded in the second half and ran away with it. Chicago simply had too much firepower, and got huge performances from Carlos Boozer (22 points, 18 boards), Derrick Rose (17 points, 12 dimes) and Luol Deng (15 points, 9 rebounds, 2 steals). OK, Deng’s wasn’t all that special, but you catch my drift. Either the Bulls are really starting to put things together, or the Pacers are just awful when Granger isn’t on the court. Maybe both.

While the Heat (upwards) and the Hornets (downwards) continued in the same directions they’ve been moving, the Mavs were stopped dead in their tracks by a Bucks team that refused to fall down. After storming back from down 20 with a 32-point third quarter, Milwaukee recieved a number of big hoops from Brandon Jennings (23 points, 10 dimes) and Andrew Bogut (21 points, 14 boards), and made just enough clutch defensive stops down the stretch. Dirk Nowitzki scored a cool 30 spot, but couldn’t leave come through in the final two minutes, as the game slipped away and his crew’s victory streak ended at 12. Dallas will look to start a new run tomorrow night, when they host the struggling Blazers.

The night’s last game was also the testiest, featuring a nice little assortment of mini-squabbles (Deron Williams vs. Monta Ellis) and an intense Utah crowd. Deron, with 30 points and 10 assists, carried his team to the win, though four other Jazz players scored in double figures. While Jerry Sloan’s guys have been alternating between Ws and Ls the last half-dozen or so contests, Golden State has now dropped seven in a row. Hard to throw the blame at anyone specific, as first David Lee and now Steph Curry have experienced unfortunate injuries and thrown off chemistry. Tonight they’ll look to avoid another defeat when the TWolves come to town.

Actual Stats: Zach Randolph: 25 points, 20 rebounds, 3 steals, 2 assists.
Moment of the Night:
Every once in a while, LeBron does something to remind us he’s really, really good at playing basketball…