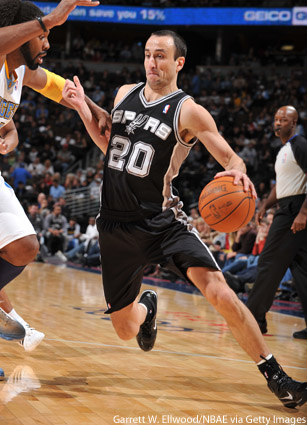 With John Wall sidelined, Devin Harris went to town. He didn’t shoot well from the field (7-25), but he got to the line 17 times, converting 14, and finished with 29 points and 9 dimes as he led the Nets to the W. The victory snapped an eight-game losing streak, and was the sixth-straight loss for the Wiz, who fell to 6-18. And things aren’t getting any easier; Washington has Miami at home tomorrow night. Should be fun.

The Rondo-less Celts went against the Joe Johnson-less Hawks, and simply put, Boston got a stronger effort from those that were healthy than Atlanta did. Ain’t much more to it. Every starting Celtic (plus Big Baby) scored in double figures, while, strangely enough, the only Hawks that go going were Marvin Williams (26 points) and Jeff Teague (18 points). That wasn’t cutting it—nor was Josh Smith’s 1 point off 0-8 shooting or Al Horford’s 8-point, 7-rebound night. Jamal Crawford, who’s been great in Johnson’s absence, was out with a sore back, and that certainly didn’t help the road team’s cause at all. Boston’s winning streak is now at 12, and there’s no reason it’ll slow down with home games against the Pacers and the Sixers in the next few days. So, that momentum thing really works.

First of all, THIS:

Woah. I just ripped my shirt off, which means I need to hurry this recap up because it’s cold as hell in here. Those who stayed up late last night were treated to another great TNT matchup (after a bunch of stinkers, those national TV games are starting to pick up, huh?) between two West Coast powerhouses. The Spurs have been incredible—like, They might be the best team in the League incredible—but the Nugs stayed with them, matching their every move as the contest went down to the wire. With seven seconds remaining, down one, San Antonio ran an in-bounds play and found Manu Ginobili—fresh off destroying the Bucks with a buzzer-beating game-winner—who put in a runner on the left side of the lane to give the Spurs the lead with four ticks remaining. (God damn, how clutch is this dude?) Anyway, the clock approaching zero, Carmelo Anthony (who scored 31 points and grabbed 9 boards total) drove to the hole and drilled a floater in the lane…FOR THE WIN! But, no. (This feels familiar.) Melo also drilled Manu, who beat the Nuggets’ forward to the spot in the paint and drew a charge as time expired. The refs put 0.4 seconds back on the clock, and the Spurs inbounded the ball cleanly, sealing it up. It’s always a tough, bound-to-be controversial move to blow the whistle—for a charge, of all things—to determine the fate of an entire game, so some disagreement on the call is inevitable. I made the video the MOTN below, so peep it and let me know what you think. Call me crazy, but it looks like Manu got there and that it was a great decision by the ref. Your thoughts?

Moment of the Night:

Alright folks, I’m out. Judging by the amount of comments that have been pouring in, it’s been a hell of a week for pro basketball, meaning this job is easier and more exciting than ever. I don’t know if you’ve read about it, or saw it on TV, or heard about it on the radio, or talked about it with your grandmother, but there’s this game on ESPN tonight that you should probably check out. I’d recommend looking it up on the Internets if you haven’t been paying attention—you won’t be disappointed. (Google “basketball” or something.) But for real, enjoy the fun, SLAM Fam. See ya Monday.