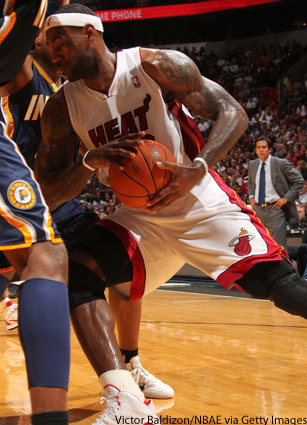 Mediocre professional basketball teams, take note. This is how it’s done. After suffering an unfortunate and downright embarrassing loss in Toronto Sunday, the Celtics came out angry and fired up last night. They jumped out to a 26-point first quarter lead, and it was smooth sailing from there. Nate Robinson’s best Rondo impression wasn’t that far off, as he had 16 points and 10 dimes, while Kevin Garnett put up a solid 17-11-5 line. Straight up: This is how championship contenders respond to losses. Paying attention, so-called competition? Speaking of…

It was a cold, cold night in South Beach. The Pacers rolled all over the Heat, going up big in the second quarter and holding on in the fourth. After sitting out a game with a sprained wrist, Dwyane Wade returned, but to little success; he finished with 3 points on 1-13 shooting. Everyone has an off game here and there, but his 1-5 showing from the free line screams of something else—distraction, injury, something. Danny Granger led Indiana with 20 points and 11 boards, while Brandon Rush (hey!) also dropped 20.

They say a picture’s worth a thousand words, which means a video’s worth somewhere around 50,000. And since I don’t have the space or energy to write that much, I’ll let this 57-second clip sum up the Miami Heat’s ’10-11 season thus far. Tell me you couldn’t imagine LeBron calling up DWade this past July and saying, “It’s making my head spin, how many activities we could do!”

Quick note: Maybe LeBron’s supporting cast in Cleveland was a little underrated? Is the suggestion that crazy? Anyway, I do hope Miami gets this sorted out, if only because I’d like to see Dwight Howard at his most intense, and I have a feeling that matchup would really bring it out of him. While we’re at it…

(My segue game is on point!)

If you were sleeping on the 2010-11 San Antonio Spurs, wake your ass up. These dudes are back. After defeating Utah, Phoenix, and now Orlando, the Spurs have the League’s best record (12-1), and are bringing to the table an incredible and somewhat ridiculous array of characters: steady vets (Tim Duncan, Tony Parker), comeback-seeking middle-aged folk (Manu Ginobili, Richard Jefferson), and up-and-comers (DeJuan Blair, George Hill). Manu led the way with 25, and TP scored 24 and dished 10. The contest was close late, as the Magic were down just two with around two minutes to go, but some clutch San Antonio stops and some sloppy Orlando turnovers were ultimately the difference. Dwight scored 26 and collected 18 boards in the loss.

If Jeff Green can be this effective, these guys could be a force to be reckoned with come April. He went for 24 and 6 and drilled a game-winning trey with under a minute remaining, and as someone who’s been consistently noting that a third piece needs to step up for the Thunder, I’m suddenly geeked for this squad to evolve into a playoff contender. (And let’s admit it: that hasn’t happened yet.) Kevin Durant and Russell Westbrook were still great (48 combined points), but the reduced workload could be vital for them moving forward. Kevin Love’s fantasy basketball takeover continued (24 points, 17 boards), while Michael Beasley put in 15, his first game under 25 since November 9.

Welcome back, Steve Nash. Your teammates missed you. Nash went for 24 and 9 in the high-scoring W, which also depended largely on a strong 26-point Jason Richardson performance. Hard to say what went wrong for the Rockets (they hit 49 of 100 shots), but their lack of defense would probably be a good first guess.

Something tells me Jerry Sloan is happy his guys finally earned a victory that didn’t require a fourth-quarter comeback. The Jazz were up 22 after three, and were able to coast from there. CJ Miles’ (20 points, 8-13 from the field) impressive play continued, and Al Jefferson was right behind him with 19. Don’t underestimate how much better these guys can still get, especially as Al Jeff continues to pick up Sloan’s offense. DeMarcus Cousins led the Kings with 18.

So that David Lee guy is kind of important, huh? The Warriors are now 1-5 in his absence, and their already-weak frontline seems to be missing him more and more as the days go by. Carmelo Anthony took full advantage, scoring 39 (10-24 from the field) and getting to the line at will (17-17 from the stripe). Denver is now 8-6 and is off until Friday, when they’ll host Chicago.

The Clippers aren’t nearly cohesive enough to win regularly, but are simply too talented to never win. And as a result, these things happen. Playing the League’s (now former) best record holder, LAC shot 50.7 percent (38-75) from the floor and were able to barely steal a close one in the Staples Center. For the first time in, I don’t know, a long while, Chris Paul (14 points, 6 assists, 1 final-possession turnover) didn’t come through in the clutch, and a Ryan Gomes tip-in with 37 seconds to go went down as the game-winner. The Bees fell to 11-2 (they’ll be alright), while Blake Griffin and Co. are now 2-13. Savor it while it lasts, Clips fans.

Performance of the Night: Carmelo Anthony: 39 points, 17-17 from the FT line, 9 rebounds, 5 assists.
Moment of the Night: I’m just gonna give this to the collective realization we’re having that the Heat need some serious time to get their act together. Which will happen, eventually. But still. On a subconscious level, I think even those of us who truly believed they’d need some time (as opposed to, say, the 73-win predictors) actually thought it’d take maybe 15, 20 games for the group to click. Nope. More. From the looks of it, we’ve got a while—and the gap between Boston and Miami appears to be wider than ever. Don’t shoot the messenger.