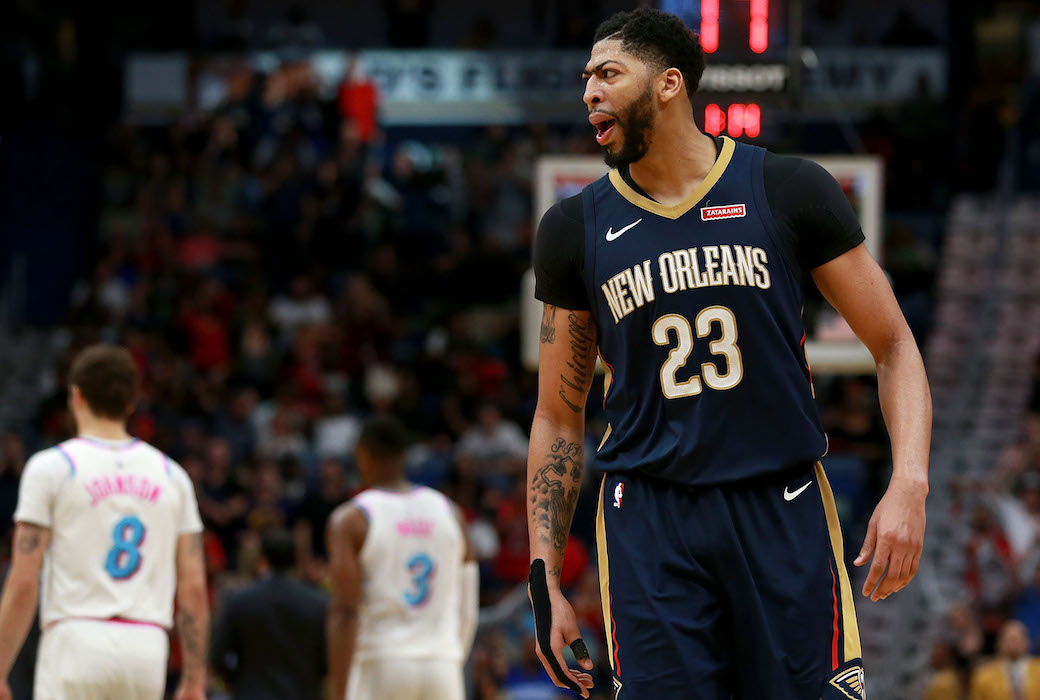 Jrue Holiday‘s basket with seven seconds left lifted the Pelicans in an overtime thriller. Anthony Davis was the unquestioned star of the game, scoring 45 points and grabbing 17 rebounds. Davis has now scored 40-or-more points three times in his last five games. He also did this to Dwyane Wade:

Wade did his part however, giving the Heat the lead twice in the final seconds of overtime before the Pelicans answered each time. Goran Dragic led Miami with 30 points.

Rookie Daniel Theis scored a career-high 19 points as the Celtics started the second half strong. The Pistons led by five after the first quarter, but the Celtics out-scored Detroit by 17 in the second to take control. Ish Smith had 20 to lead the Pistons, while Andre Drummond had 15 points and 17 rebounds.

Theis slams it for a new career-high (14pts) 💪 pic.twitter.com/CGeFS4Zmpq

Thaddeus Young scored 16 of his 20 points in the first half as the Pacers never trailed against the last-place Hawks. It was Indiana’s fourth win in a row and the Pacers have now won 15 of their last 21. Domantas Sabonis scored 21 points and had 13 rebounds for game-highs in both categories. Isaiah Taylor led the Hawks with 17 points and six assists.

Kemba Walker scored 24 points and hit five threes to lead the Hornets to their third win over the Wizards this season. Frank Kaminsky had 23 more as the Hornets were never really threatened. Bradley Beal had 33 for the Wizards. Coming into the game, Washington had won eight of its last 10, all without John Wall.

LeBron James (18 points, 14 rebounds, 11 assists) notched his 11th triple-double of the season to lead the Cavs to their first post-All-Star win. The Grizzlies committed 21 turnovers, but got 15 points and 10 assists from Tyreke Evans.

LeBron with a lesson on why you shouldn’t jog back 💪 (via @SportsCenter) pic.twitter.com/nQkeYSTa2u

Jonas Valanciunas‘s dunk as time expired forced overtime, but the Bucks used an 8-0 run in the extra session to come away with the win. Valanciunas thought he had been fouled on that dunk, where there was, admittedly some contact:

GOING TO OVERTIME 😱😱😱 (via @nba) pic.twitter.com/ZLTJp77fEO

There was a similar instance in overtime as well. Nevertheless, Giannis Antetokounmpo had 26 as one of three Bucks players to score 20-or-more. DeMar DeRozan led all scorers with 33.

The 18-point loss was the least of Minnesota’s worries as Jimmy Butler went down with an ankle injury in the third quarter. He needed to be helped off the court and will have an MRI tomorrow, according to the team. James Harden led the way for Houston, posting 31 points, and Chris Paul flirted with a triple-double with 14 points, 10 rebounds, and eight assists. Andrew Wiggins had 21 points to lead the Timberwolves.

The Clippers scored the first 19 points of the game, went ahead 40-18 after the first quarter, and led by 29 at the half in a rout of the Suns. Tobias Harris had 30 points and 12 rebounds to lead the Clippers, while T.J. Warren and Devin Booker each had 27 for the Suns.

Portland got 26 points from CJ McCollum and 24 from Damian Lillard as the Blazers snapped the Jazz’s 11-game winning streak. The Blazers scored 22 points off of 20 Utah turnovers and Donovan Mitchell led the Jazz with 21 points.

Nikola Jokic (28 points, 11 rebounds, 11 assists) notched his third-straight triple-double and the Nuggets won their fourth game in a row. The Spurs erased a nine-point deficit in the fourth to take the lead before a Gary Harris layup put Denver ahead for good. LaMarcus Aldridge had 38 to lead the Spurs.

Julius Randle had a triple-double with 18 points, 12 rebounds, and 10 assists in a game that was a blowout from the start. The Lakers shot 52 percent for the game and led by 22 at the half to hand Dallas its third loss in a row. Harrison Barnes and Wesley Matthews each had 19 to lead the Mavericks.

IT hit the ceiling with this one (via @nba) pic.twitter.com/dasFN0kJqc