Kemba Walker drops 52, the Warriors blow out the Cavs, multiple games go to OT and more on MLK Day. 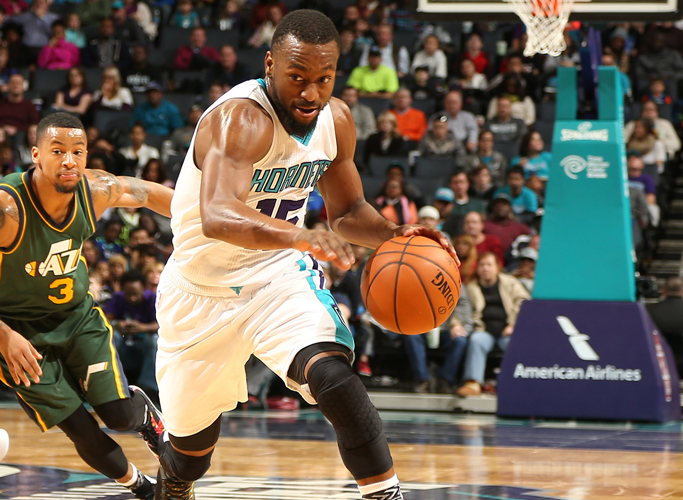 What. A. Game. After leading by 18 points, and then blowing that lead to Ish Smith (16 points, 16 rebounds) and the Philadelphia 76ers, Carmelo Anthony hit a clutch 3-pointer to force overtime. The tables then turned when Philly’s Robert Covington banked in a trey that took the game to its second overtime. Finally then, the New York Knicks took care of business at home. Arron Afflalo led all scorers with 25 points, Melo added 19, and both Kristaps Porzingis (16 points, 12 rebounds) and Robin Lopez (16 points, 10 rebounds) each finished with a double-double.

One double-overtime game just wasn’t enough. The Utah Jazz and Charlotte Hornets duked it out in North Carolina this afternoon—but it was the home team that won out. Kemba Walker had everything to do with that. A new career and franchise high of 52 points (plus 9 boards, 8 assists and 2 steals) carried Buzz City to a win over the visiting Jazz. Utah wasn’t put away easily though…Trey Burke (25 points) forced an OT with his 3-ball, and Gordon Hayward finished with 36 points, 9 rebounds and 5 assists in the L.

The Portland Trail Blazers led the Washington Wizards by as many as 24 points on Monday, as they cruised to a win in D.C. after losing to the 76ers in their previous game. CJ McCollum led Portland with 25 points, Meyers Leonard added 18, and Damian Lillard finished with 16 in the win.

With 16 points, 10 boards and 6 assists, Marc Gasol led his Memphis Grizzlies to a win over the New Orleans Pelicans on Monday. After Courtney Lee missed a free throw with 3.5 seconds left on the clock, Gasol sent the rebound outside and the Grizz were able to keep it away from the Pels, letting the 101-99 score stand. Mike Conley finished with a 15-point, 10-assist double-double in the win.

Derrick Rose (20 points, 4 assists) and Pau Gasol (31 points, 12 rebounds) combined for 51 points in the Chicago Bulls’ win over the Detroit Pistons on Monday. All five of the Pistons’ starters finished in double-figures, but Detroit got hit with three techs in the third quarter (2 of which were on Kentavious Caldwell-Pope). The Bulls then finished things up, without Joakim Noah.

The Atlanta Hawks led the entire way in their game versus the Orlando Magic on Monday. Al Horford finished with a team-high 15 points, and Paul Millsap added 13 points, 12 boards and 6 assists in the home win. In this second consecutive dub, the Hawks shot over 50 percent from the field, and held the Magic to just under 35.

The Brooklyn Nets opened up the first quarter on the road up north with a 10-point advantage on the hometown Toronto Raptors team. But the momentum shifted soon enough, as the Raps outscored the Nets 33-20 in the second quarter. Kyle Lowry (31 points, 8 assists) and DeMar DeRozan (30 points, 5 assists) combined for 61 points

The Golden State Warriors rolled into the Q like they owned the place on Monday. Stephen Curry scored 16 of his 35 points in the first quarter alone as the Dubs handed LeBron James (16 points) his worst loss at home, which also contained his worst home deficit of 43 points.

Deron Williams scored 10 of his 20 points in the extra period to lift the Mavericks over the Celtics on MLK Day. Dirk Nowitzki led all scorers with 31 points—including this dagger below—plus 11 rebounds.

Isaiah Thomas and Marcus Smart dropped 20 points apiece for Boston in the loss.

JJ Redick had a monster game tonight in the Clippers’ game against the Rockets. He finished with a career-high 40 points in the home team’s win. It looked like L.A. had things taken care of in regulation before Houston exploded in the fourth quarter for 42 points, including back-to-back clutch 3-pointers by Marcus Thornton (23 points) that sent this final game on MLK Day to overtime. But despite Thornton’s heroic efforts and Dwight Howard’s 36 points and 26 boards, Redick and Chris Paul (28 points, 12 assists) took care of business at Staples.