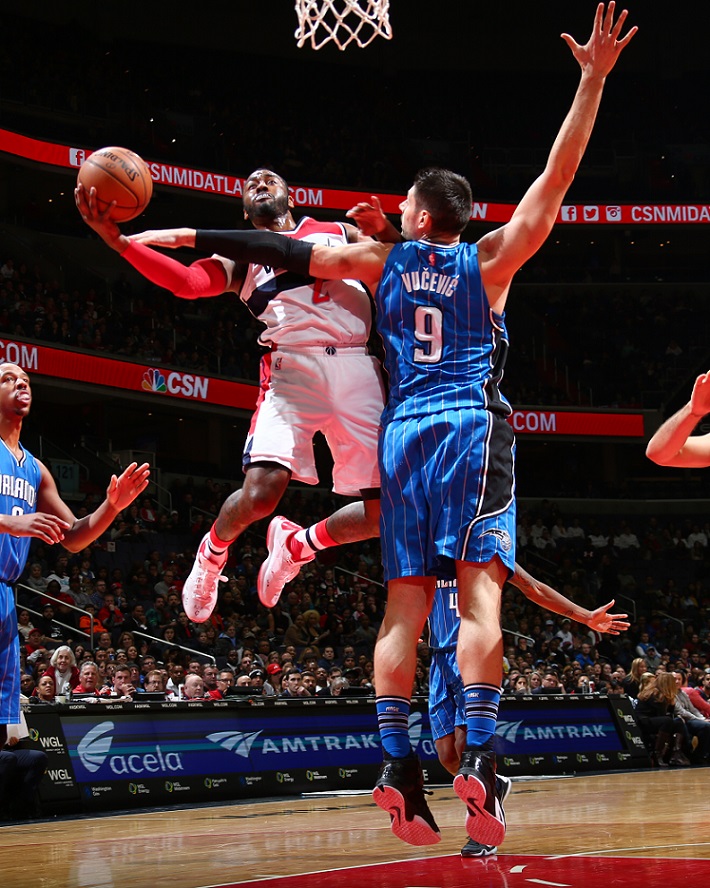 John Wall put the Wizards on his back, scoring 24 points with 13 dimes as the team snapped a two-game losing streak at home. Having now posted double-doubles in eight consecutive games, Wall drew ooh’s and aah’s from the crowd with his slick move on Nikola Vucevic in the second quarter. Despite a 20-point effort from Victor Oladipo – and a combined 47.1 field goal percentage – Orlando dropped the first of their three-game road trip.

The wheels have come off for Derek Fisher’s Knicks. Starting the year on an encouraging four-game winning streak, New York has now lost five of their last six. Getting outscored by Chicago 34-18 in the first quarter and 31-8 in the fourth quarter, the team may need a roster shake-up to maintain any hope of contending. Chicago, meanwhile, keeps on cruising with their third straight victory. Bobby Portis provided a spark with a double-double off the bench, while Jimmy Butler led the way with 23 points.

Knicks scored 8 points in the 4th quarter tonight vs Bulls — fewest points the Knicks have scored in a 4th qtr in the shot-clock era.

Bismack Biyombo must love playing against his former team. After grabbing 18 rebounds against Charlotte on Dec. 18, Biyombo and Jonas Valanciunas cleaned up on the glass Friday, grabbing 13 and 11 boards, respectively. DeMar DeRozan continued his streak of offensive dominance- on the heels of a 34-point effort against Washington on Dec. 30, DeRozan shot 7-of-18 from the field on Friday.

After averaging 9.3 boards over a three-game lull, Hassan Whiteside came out in full force against Dallas, securing 19 rebounds to go with 25 points. 19 points from Gerald Green off the bench and seven dimes from Goran Dragic helped Miami end Dallas’ four-game winning streak. Deron Williams played 20 minutes in his return from a hamstring injury, only for Devin Harris to depart Friday’s game with back spasms.

It doesn't look great for Devin Harris and his back injury. Here's the latest: https://t.co/s5rYnSifWe

With a sore right shoulder sidelining Kobe Bryant, Louis Williams picked up Los Angeles’ offensive slack by scoring 24 points on 6-of-15 shooting. Julius Randle continues to anchor coach Byron Scott’s second unit, dropping 15 points with nine boards on Philadelphia. On the surface, a match-up between a 7-27 and 3-32 team seems meaningless, but as the season moves forward these games will have significant off-court implications.