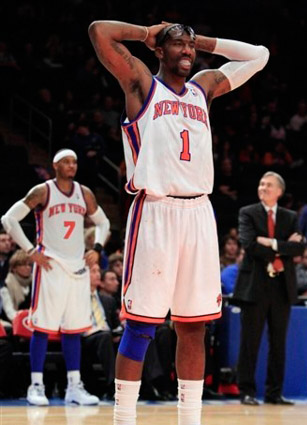 Another solid night of games saw the Nuggets take down the Knicks in double overtime, a loss that the New York media is treating as apocalyptic, a battle between East Conference heavyweights Philadelphia and Miami and the Rockets defeating the Spurs at the Toyota Center. Here’s the full recap…

One night after losing by 35 to Chicago at home, the Cavs traveled to Atlanta and got waxed once again. The Hawks played their best all-around ball of the season, shooting 55 percent from the field, committing only 10 turnovers and distributing 31 assists. Joe Johnson scored 17 in the first half and finished with 25 on 10-18 (5-9 from 3 point range) shooting. Atlanta finished the first quarter on a 13-3 run and the Hawks cruised to an easy victory at home, making them 8-1 at Phillips Arena. Josh Smith’s shooting woes continued; the hawks forward shot just 2-9 for 8 points but did have 11 rebounds and 5 assists. Smith has now shot 7-24 over the last two contests but don’t expect this slump to last much longer. Rook Kyrie Irving has been off to a nice start and had a team high 18 points (8-10 shooting) but only 2 assists compared to 7 turnovers. Cleveland has now dropped 3 straight and Coach Byron Scott has to right the ship fast–remember, this team lost 26 in a row last season.

In the most anticipated matchup of the evening, the Nuggets, who traveled to New York for the first time since trading Carmelo Anthony last year, handed the Knicks their sixth straight loss in a double overtime thriller. George Karl only played 7 Nuggets last night, but former Knicks Danilo Gallinari, Timofey Mozgov and Al Harrington combined for 77 points and looked quite comfortable back at the Garden. Gallinari, who

received a nice ovation from the Garden faithful, had a game high 37 points shooting 9-19 from the field and 18-20 from the stripe, he also grabbed 11 rebounds. Gallinari was all over the court for Denver, scoring in a variety of ways and absolutely torched the Knicks for his career high 37. One day after I dubbed him the “new Shawn Bradley”, Timofey Mozgov made me eat my words with a career high 16 points and a few dunks of his own. Al Harrington looked quite happy to be defeating his old team. Harrington dropped 22 points in the second half and overtime periods and hit a few huge 3-pointers, including one in the second overtime to push the lead to 115-111. In a back and forth game, Melo had 25 points for the Knicks (but also took 30 shots) and once again proved why he is one of, if not the, best crunch time scorer in the league. Trailing by 98-96 at the end of regulation, Melo caught the ball on the inbounds play, took a few dribbles at the top of the key and hit a near impossible fade away with 1.7 seconds left to send the game to extra time. Anthony put the Knicks up by 111-110 in the second overtime period but couldn’t overcome Gallinari’s 9 points in the session and the Knicks dropped a heartbreaker at home. Gotta keep the faith.

Down in South Beach, the Sixers, who have been playing the best team basketball in the league thus far, had no answer for the duo of LeBron James and Chris Bosh. Playing without Dwayne Wade, LeBron and Bosh shouldered most of the team’s weight. James had 28 points (12-17 shooting) 9 rebounds, 5 assists and 4 steals while shutting down Andre Iguodala (4 points) and wowing the crowd with his usual dazzling play. Bosh had 30 points (11-17), 7 boards and 5 assists, helping the Heat outrebound Philly 52-31. Interesting stat: Miami is now 6-0 when DWade is on the bench–I’ll let you take that however you want to. Playing on the second night of a back to back, Philly couldn’t take advantage of a Wadeless Miami team. Philly kept in close through the third quarter, only trailing by 4, but the Heat went on a 23-8 tear to take a 92-73 early in the fourth. Despite 22 from Lou Williams, Philly couldn’t overcome an overall poor shooting night and saw their usual tough defense get torched to the tune of 113 points.

After missing Friday’s loss to Memphis, Rodney Stuckey returned with a vengeance and showed no ill effect from a groin injury that has kept him sidelined. Stuckey, who hadn’t scored more than 17 points all season, exploded for 28 points, 5 assists and 4 rebounds while filling in for Ben Gordon at the 2 spot. Rookie Brandon Knight assumed point guard responsibilities and played a solid game of basketball. Knight had 14 points and managed the game well, committing only 1 turnover in 36 minutes of play. Knight and Stuckey were the catalysts for a 16-4 third quarter run which helped Detroit build a 16 point lead over Portland. After grabbing 23 rebounds in Toronto, LaMarcus Aldridge left much to be desired on the glass in Detroit, nabbing only 4 rebounds to go with his 25 points. Raymond Felton had 20 points (6-9) and 9 assists but the Blazers sorely missed the play of Gerald Wallace who was out with a sprained finger.

In an ugly contest, the Thunder were able to overcome a poor shooting night with great defense (they held the Nets to 31 percent shooting) on their way to a 10 point dub. Kevin Durant shot 9-22 (0-6 from 3 point range) but still finished with 20 points, 15 rebounds and 2 steals. Russell Westbrook also shot poorly (9-21) but finished with 21 points and 6 assists while James Harden chipped in with 16 off the bench. Speaking of great defense, Serge Ibaka finished with 5 blocks including this one on a driving Deron Williams. For the Nets, rookie MarShon Brooks finished with 14 points. Brooks has been giving coach Avery Johnson great minutes and the Nets may have found a gem in Brooks.

Playing without Derrick Rose, Joakim Noah and Taj Gibson, the Bulls were able to put away a Bobcats team that stuck around until the end. Chicago was up by as many as 19 in the fourth but allowed Charlotte to fight back and get within single digits before finally ending any hopes of a comeback with a 10-0 run. Carlos Boozer led the Bulls with 23 points and 8 rebounds while teammates Luol Deng and Rip Hamilton contributed with 22 and 20 respectively. Omer Asik, who filled in nicely for Noah, patrolled the paint and grabbed a game high 15 rebounds. For the Bobcats, Gerald Henderson continued his strong play with a team high 22 points and 9 rebounds and center Byron Mullens had 17 points but only 5 rebounds. The Bulls are now 7-0 in the Windy City and are one of two teams in the league undefeated at home.

After winning two straight, Sacramento traveled to Memphis and got smacked around by the Grizzlies. Four Grizzlies finished with 20+ points as the Kings played swiss cheese defense allowing Memphis to shoot 54 percent from the field. Rudy Gay had a team high 23 points and 4 steals, and was responsible for his usual big dunk highlight. Marc Gasol has been playing spectacular basketball recently and last night he continued his strong play with 20 points (8-11 shooting) 11 rebounds and 5 assists. Could an All-Star selection be looming for Gasol? Memphis dominated inside, outrebounding Sacramento 51-38 and outscoring them 62-44 in the paint. It looks like Memphis has recovered from Zach Randolph’s injury as they have now won 6 straight and look to improve on their record during this week’s west coast swing. For the Kings rookie Jimmer Fredette  had a team high 20 points (15 in the 2nd) and 6 assists.

Coach Rick Carlisle announced yesterday that reigning Finals MVP Dirk Nowitzki will be held out for the next four games to work on his conditioning. With Nowitzki watching from the pine, the Mavs suited up in New Orleans and outlasted the Hornets in a competitive game. Lamar Odom got the start for Dirk and finished with 16 points. Carlisle used all 11 of his healthy players last night and got productive minutes from nearly everyone. JET had 12 off the bench, Shawn Marion had 14 and Delonte West finished with 16 points (6-10), 5 rebounds and 6 assists and is looking like he may have been the steal of the off-season. New Orleans led 41-38 with 1:06 remaining in the first half but allowed the Mavs to go on a 15-0 run late in the second and into the third quarter and fell behind 53-41. Although they came close, the Hornets never regained the lead and dropped their seventh straight game putting their record at 3-13. Where is Eric Gordon?

Don’t look now, but the Rockets have won 6 straight (9-7) and are currently playing some of the best basketball in the West. Playing at the Toyota Center, where the Rockets have been damn near unbeatable, Houston got a game high 25 points from Kevin Martin. But, it was the guard play of Goran Dragic and Kyle Lowry that secured victory. Both Lowry and Dragic finished with 14 points and stepped up when their team needed them most. The point guard combo combined for 16 points on 6-11 shooting during the fourth quarter and helped put away a Spurs team who was in it until Gary Neal’s desperation 3-pointer missed with seconds remaining. Up 84-79 with 9:15 left in the fourth quarter, San Antonio allowed Houston to go on a 13-2 run to regain the lead and the Rockets never let go. Tim Duncan sat last night and reserve forward Tiago Splitter had his best game of the season with a 25 point, 10 rebound effort while Tony Parker had 24 and 13 assists.

In the nightcap, Paul Millsap had a statement game, outplaying Friday night’s hero Kevin Love. Millsap scored 26 points, including 12 in the fourth quarter, grabbed 9 rebounds and was showered with “All-Star” chants from the crowd when he stepped to the free throw line. Frontcourt mate Al Jefferson had a double-double with 18 points and 12 rebounds; behind the great play of both Millsap and Jefferson the Jazz were able to win the rebounding battle 46-35. Utah was up by as many as 14 midway through the third quarter, but let the lead slip away. Late in the game, Jefferson and Millsap hit back-to-back buckets to take a commanding 8 point lead and put away the T’Wolves for good. C.J. Miles closed out his strong week of play with his third straight double figure scoring game, this time going for 18 off the bench. Ricky Rubio led the Timberwolves with 17 points, 11 assists and only 2 turnovers. Rubio displayed more of his tremendous court vision and flashy passing connecting with fellow rookie Derrick WIlliams (15 points) on a beautiful alley-oop. Minnesota had 7 players score in double figures but couldn’t pull out the dub in Utah.

Stat Line of the Night: In his return to New York Danilo Galliari had 37 points and 11 rebounds in a double overtime thriller.

Play of the Night: Melo sends the game to overtime.

Dunk(s) of the Night: Rodney Stuckey gets vertical.

Tonight: Abe is back to take you through another week of hoops as the All-Star break quickly approaches. Today, the Wiz take on the C’s and the Pacers travel to LA to close out the weekend. Thanks for rockin’ with me y’all, peace!