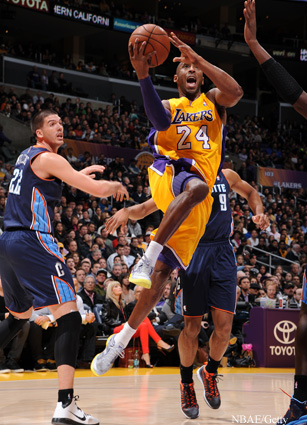 The Wiz just cant catch a break. To add insult to injury, D.C. not only lost a heartbreaker in overtime, they also lost their talented rookie Bradley Beal. With the game tied at 58, Beal went up for a dunk that was blocked by Josh Smith and hit the floor hard. Thankfully, Beal got up and walked off the floor and made his way to the locker room. With the Wizards shaken up, the Hawks reeled off a 7-0 run and took a three-point lead into the fourth. In the fourth, Earl Barron scored his first basket of the game with 23 seconds left to tie it in regulation. In overtime, Barron hit a jumper with 3 minutes to go to put the Wizards up one but the Hawks responded with six straight points. First, Lou Williams, who scored a team-high 24 points, hit a free throw then DeShawn Stevenson hit a three to put Atlanta up for good.

— Jordan Crawford led all scorers with 27 points, 11 boards and 11 assists. Can’t believe I just typed that.

With last night’s win against the Cavs, the Raptors have now won three straight games. Toronto used a huge fourth quarter to pull away and cruise to an easy victory. Trailing by two heading into the fourth, a few unlikely Raptors led the way over the final 12 minutes. The Raptors went on a 17-7 run that turned a two-point deficit into a 12-point lead. Alan Anderson (18) hit three three-pointers and John Lucas III (11) scored eight, including a four-point play that put the Cavs up 87-78 and the game out of hand.

— Jose Calderon led the Raptors with 23 points and 6 assists. Amir Johnson scored 17 and DeMar DeRozan scored 16 and was 8-8 from the stripe.

— Kyrie Irving scored 23 and dished out 7 assists. Anderson Varejao scored 22 and grabbed 10 boards but went down with a knee injury. He is listed as day-to-day.

— Landry Fields has been cleared to play.

The Nets are reeling and last night’s tough loss to the Jazz certainly won’t help their psyche. Up by 13 in the third quarter, the Jazz scored on their first three possessions to trim the lead to seven and put themselves right back in the game. In the quarter, the Jazz grabbed 8 offensive boards and forced 7 turnovers to completely swing momentum as Utah outscored the home-team 48-33 in the second half. With time winding down in the fourth and the Nets trailing by two, Joe Johnson came up with a huge steal and found Gerald Wallace for the game-winning three. The shot missed and Reggie Evans put back attempt rolled off the rim and the Jazz escaped with a dub.

— Joe Johnson led the Nets with 21 points. Deron WIlliams had an unimpressive 14 points (5-12 shooting) and 5 dimes.

In a surprising stat, the Heat were outrebounded 53-24 but still pulled off a victory thanks to strong shooting from behind the arc. For the game, Miami shot 52 percent from three, hitting 13 of their 25 attempts. After getting off to a slow start, the Heat went on an 18-8 run over the final five minutes of the first half to take a three-point lead into the half. In the third, Miami continued their hot shooting with a 13-3 run midway through the quarter that put the them up 75-66. In the fourth, the Heat outscored the T’Wolves 23-20 and pushed the lead to 19 to make for an uneventful final 12 minutes.

— The Heat win was the first time a team has been outrebounded by that big of a margin and still won since 1994.

Yes, we know we left Joakim Noah off the SLAMonline Top 50. Yes, we will continue to be bit in the ass by that decision. Noah tallied his second career triple-double last night with 11 points, 13 boards and 10 dimes as the Bulls scraped the Celtics in Chicago. After taking a 55-48 lead into the half, the C’s came back and cut the deficit to three in third. But, the Bulls went on a 9-0 run to turn that three-point lead into a 12-point difference. In the fourth, Chicago pushed their lead to 21 and left the Celtics searching for answers to what is wrong with them right now.

— Nate Robinson scored 18 off the bench.

— Rajon Rondo led the Celtics with 26 points and 8 assists.

Brandon Jennings went HAM to the tune of 34 points (13-22 shooting), 6 assists, and 5 boards to lead the Bucks over the Pacers for a tough win. Young Money came up huge in the fourth quarter and put the team on his back, carrying them to the the finish. Tied 85 apiece, Jennings hit a jumper from the left wing to snap the tie. He then hit two of three free throws after being fouled on a three. After a dunk by Paul George made it 89-87, Jennings hit a step-back three to put the Bucks up for good. Jennings finished with 13 points in the quarter.

Dorrell Wright certainly put a scare into the Mavs in the fourth quarter. After going on a 14-4 run, the Mavs had built a nice 12-point cushion with four minutes left and it looked like they would coast to a victory. But, over the next three minutes and 15 seconds, Wright went on a three-point barrage. Wright hit seven three’s for the game and after back-to-back long balls in the fourth cut the deficit to six, the Sixers had hope. O.J. Mayo and Chris Kaman responded with six points between them to make the lead nine with a minute and half left. But Wright came right back and hit two more three-pointers to make the score 102-97 with 30 seconds left. Fortunately for Dallas, they hit five of six free throws down the stretch to finally put the Sixers away.

Tim Duncan was absolutely sensational with 31 points, 18 boards, 6 dimes and 5 blocks but it wasn’t enough as a balanced attack from the Nuggets took down the Spurs. The Nuggets had a fifteen-point lead early in the fourth, but the Spurs stormed back with a 12-2 run to cut the lead to five. After Tony Parker hit a three with three and a half minutes to go, it was a three-point game. With their backs against the wall, the Nuggets needed someone to step up. Danilo Gallinari answered the bell and hit a three from the wing to make it a 108-102 game. On the next possession, Duncan had a turnover which Andre Miller turned into two points on the other end to make it 110-102 with two and a half minutes left.

— Gallo finished with 28 points and 9 boards.

— Manu Ginobili scored 16 off the bench.

— The Spurs have lost four out of five.

Something about the Lakers celebrating a one-point victory (at home!) against the Bobcats like it was a playoff game was unsettling. The Bobcats were up by 18 before the Lakers caught fire and ripped off a 28-4 run, but Charlotte hung tough and pushed the Lakers to the final second. After Charlotte tied it up at 97, Kobe hit two straight tough shots to go up four. The Lakers had a mental lapse as Dwight Howard was called for goaltending and Jodie Meeks fouled Ramon Sessions who completed a three-point play to cut the deficit to one. Kobe missed a jumper on the other end and with 21.2 left on the clock, the ‘Cats had a chance to win. Kemba Walker drove to the rack but his layup was partially blocked, Gerald Henderson gathered the rebound but just missed his follow-up layup. The ball came out to Ben Gordon at the top of the key but missed a desperation three as the clock expired.

— Kobe finished with 30, his seventh straight game with 30+. Metta World Peace and Jodie Meeks each scored 17 off the bench.

— The Lakers have won third straight while the Bobcats have missed 12 straight.

The Warriors keep rolling along and after going 6-1 on their most recent road trip, they returned home and beat the Hornets at Oracle Arena. The Hornets kept it close in the fourth, cutting the deficit to two with under three minutes to go. With a chance to tie, Greivis Vasquez was called for a traveling violation and Steph Curry made them pay for the mistake by hitting a jumper on the next possession to go up by four. After drawing a foul on Austin Rivers, Jarrett Jack iced the game with free throws with a minute and a half left.