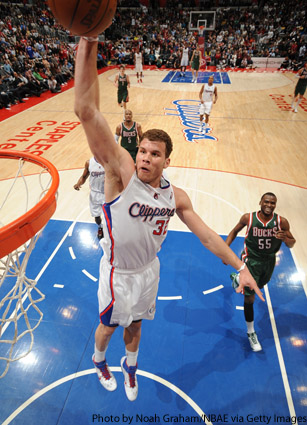 Picture this: In need of a serious roster upgrade, the Nets work insanely hard to pry a superstar from the Nuggets. After a whole bunch of failing to make that happen, they give up, turning a cold shoulder to Denver and all associated trade talks. A couple of weeks later (has it been that long?), the Nets get a chance to go up against the Nuggets—with Carmelo Anthony still in tow—and beat the hell out of them. If that ain’t irony, it’s gotta be a close relative. Despite Melo’s 37, the Nets pulled out the win, getting 27 points from Brook Lopez and 21 from Travis Outlaw. And, assuming the Nuggets grab a flight home from La Guardia or JFK (over, say, Newark), and Melo sees that NY skyline in the background, I’m sure he’ll be thinking…well, I don’t know. Take a guess?

Fresh off Jim O’Brien’s firing, Pacers interim coach Frank Vogel got his first win, leading Indiana over the visiting Raptors. Roy Hibbert dropped 24, and point man Darren Collison and young’n Paul George each scored 16 in the victory. You know, if this whole “Fire the coach, then gain some positive momentum and salvage the season” thing (see: Bobcats, Charlotte) keeps working out, we might see a few more HCs lose their job this year. Just a thought. Amir Johnson led Toronto with 18.

Do I really need to elaborate on this? Come on, those guys have gone through enough. Dwyane Wade scored 24, LeBron James’ line read 24-4-8, and Zydrunas Ilgauskas put in 12 and snatched 14 boards. And yeah, the Heat won. By a lot. Let’s just move on.

The Grizzlies jumped ahead with a huge third quarter, then barely held on as the Magic charged back in the fourth. The Magic had their opportunities, including an offensive possession with under a minute remaining (while only down 1), but they couldn’t convert (this came after Dwight Howard was called for a silly offensive foul on the previous play), and Memphis managed to hold on. Barely, though. (How often would you rely on Hedo Turkoglu missing an open three in the final seconds?) Mike Conley scored a game-high 26 and distributed 11 for the Grizz, while Dwight led the Magic with 25.

Completing a four-game home stand with a 4-0 record, the Mavs knocked down the Wizards with relative ease. Washington wouldn’t quite drift away, staying within striking distance for the full 48, but they were unable to threaten down the stretch and the Mavericks cruised in the final few minutes. Dirk Nowitzki dropped a game-high 24, while Tyson Chandler picked up some of that Caron Butler slack by scoring 18 and grabbing 18. John Wall (17 points, 10 dimes) continues to hint at his potential, and, like everybody else should be, I’m hoping JW is learning what he can from this losing and making the most of the experience.

These are strange times in Utah, as they’ve been dealing with losses, injuries, pessimistic off-the-court statements…the whole nine. But last night they earned a strong home win in front of raucous crowd. So they’ve got that going for them—which is nice. Still without Deron Williams, they received a combined 35 points and 22 boards from Al Jefferson and Paul Millsap, and got a Kirilenko-esque line from, you know, Kirilenko, who put up: 13-11-3-2-3. Sitting at 29-20, the Jazz have snuck ahead of the Nuggets by a half game in the Northwest.

They’ve still got a ways to go as far as the road goes, but the way the Clippers have been taking care of business at home is certainly the first step towards what should be some serious success in the future. This win marked their ninth consecutive home W, earned behind Blake Griffin and his 32-11-6 line. The Clips shot 52 percent, showed some solid cohesiveness, and threw down some monster slams, straight up embarrassing a few members of the Bucks. (See below.) The loss ends a three-game winning streak for the Bucks, who now stand at 19-27.

Moment of the Night: Are you excited for the Slam Dunk Contest yet?