The Celtics gave Golden State all they could handle in a thrilling double-overtime victory. 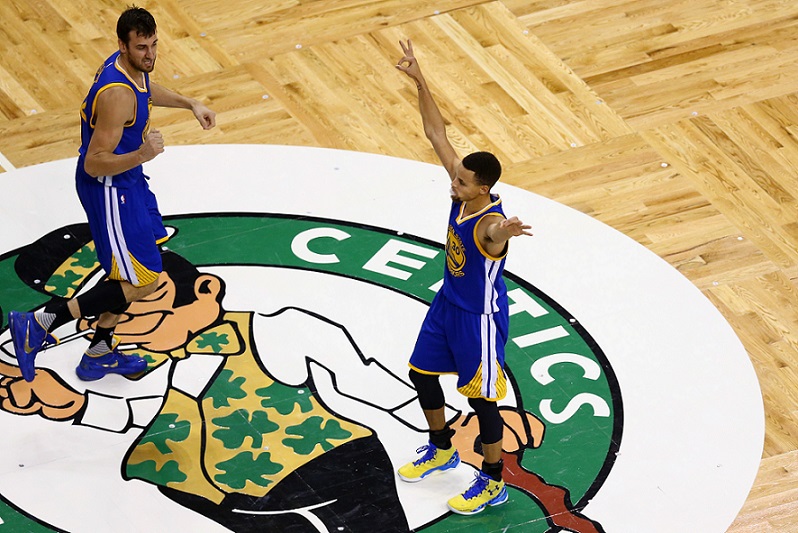 In a game that extended to double-overtime, the Golden State Warriors narrowly held on for their 24th victory of the season. The Celtics received a 28-point showing from Kelly Olynyk (who tied things up in overtime with a clutch three), while Jared Sullinger grabbed 13 boards. Steph Curry poured in 38, but it was Draymond Green with the truly memorable stat line of the night.

The Heat were not up to the task against their Eastern Conference rivals, despite a double-double from Chris Bosh and 20 points from Dwyane Wade. Rather, Monta Ellis and Paul George led the way for Indiana with 24 and 23 points, respectively. The Pacers were playing with confidence throughout Friday’s game, as evidenced by this ferocious stuff from Ian Mahinmi.

A seemingly close match-up on paper, Cleveland turned this one into a laugher, with the team’s first unit ceding minutes Sasha Kaun, Iman Shumpert, and Mo Williams in the second half. Sharp shooter James Jones even got in on the act, much to the Cleveland bench’s delight. With his team shooting 38.9% from the field Friday, Magic head coach Scott Skiles may need to re-tool his rotations.

With the exception of a 119-68 blowout loss to the Spurs on Dec. 7, the 76ers continually come within striking distance of their opponents, only to fall short. Facing a 35-14 deficit after the first quarter, Philadelphia received a double-double from Nerlens Noel and 22 points from Jahlil Okafor en route to their 23rd loss of the season. Happy to rub salt in the wound, Andre Drummond delivered a monstrous jam over two defenders in the first half.

Despite receiving a highlight-reel jam from Giannis “The Greek Freak” Antetokounmpo and 26 points from Khris Milddleton, Milwaukee absorbed their fourth loss in their last six games. Doing much of Toronto’s heavy lifting, DeMar DeRozan led the team with 27 points.

Kemba Walker posted 33 points and Nicolas Batum added 20 in Charlotte’s fourth straight victory. The Hornets made good use of their second unit Saturday; Frank Kaminsky notched 15 points with six rebounds in 27 minutes, while Jeremy Lin added 16 on 4-of-8 shooting.

With a healthy Anthony Davis and Tyreke Evans, the Pelicans are not a team to underestimate. Evans scored 27 while Davis added a double-double (18 points, 11 boards) in New Orleans’ first victory over the Wizards since Feb. 2011. Jrue Holliday earned bonus points for hitting this second quarter buzzer beater from halfcourt.

In what could be considered a moral victory for Lakers fans, D’Angelo Russell returned to the starting lineup Friday, dropping 24 points in 36 minutes of floor time. Los Angeles was thoroughly out-classed in all other aspects, however, shooting 40.9% percent from the field compared to 53.7% from the Spurs.

Now averaging 21 points over his last five games, C.J. McCollum led Portland to victory with 26 points while Al-Farouq notched a double-double with 13 points and 13 boards. Phoenix, meanwhile, received a 31-point effort from Eric Bledsoe but little help elsewhere — Brandon Knight posted a goose egg, going 0-for-12 from the field.

Posting a season-high 20 points with seven assists and six boards, Jameer Nelson led Denver to an overtime victory Friday. Just one game removed from a career-high 37 points, Kevin Martin added 22 points, going 2-of-7 beyond the arc.