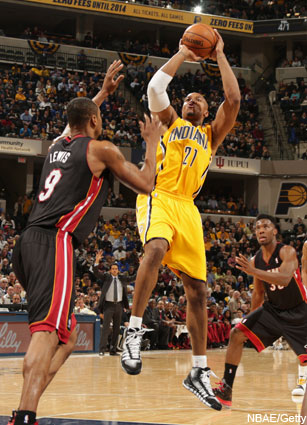 The story from last night was Indiana’s come-from-behind win against the defending champs, so let’s get to it.

What a great game. Miami led by 11 after the first quarter and 47-40 at the half. Indiana couldn’t get much going offensively, and Paul George was 0/4 in the opening 24 minutes.

Then Indiana flipped a switch. In the first minute of the third quarter, they went a quick 5-0 run behind a Lance Stephenson triple and a bucket by Roy Hibbert, cutting the lead to two. From there, the teams battled back and forth, looking exactly like the East’s two dominant squads. By the end of the third period, Indiana grabbed a four-point advantage.

Miami trailed just 74-72 with about six minutes to play, and then a funny thing happened: the Pacers simply put the clamps down and put the game away. A quick burst put them ahead 81-72 with 5:18 left, and Indy maintained at least a five point advantage for the rest of the game.

Hibbert was an animal in that huge third quarter, and finished with 24 points (10/15), 5 boards and a rejection. He’s as good as any center in the NBA. George rebounded from his brutal first half to finish with 17 points, 4 assists and a pair of steals. He looked like a different guy in the final two quarters.

David West added 17 of his own, including a game-clinching bucket with under a minute remaining. Lance Stephenson scored 12 points with 6 rebounds and 5 assists. Indiana is a perfect 10-0 at home. Until Miami is dethroned, it’s tough to argue that any team is better than them, but the Pacers were awfully impressive last night.

LeBron posted a big double-double for Miami (17 with 14 boards), but didn’t do much in crunch time—his airballed three in the final minute all but iced the game. Dwyane Wade scored 17 with 6 and 6, and Chris Bosh scored 12 points and grabbed a lame 3 rebounds, invoking memories of his totaling 30 boards throughout seven Conference Finals games last postseason.

The two teams face off again a week from today in Miami.

This score doesn’t totally tell the story of the game, as Toronto led by 12 after one and trailed by three at the break. But they got smoked in the third quarter and by the start of the fourth the game was out of reach.

In typical Spurs fashion, seven guys scored in double figures, nobody played 30 minutes, the team shot 55 percent and scored 50 points in the paint. Manu Ginobili was the high-man with 16 points and 9 dimes.

DeMar DeRozan and Amir Johnson led Toronto in scoring with 19 in the team’s first game without Rudy Gay. Terrence Ross was inserted into the starting lineup in Gay’s place, and saw 38 minutes. He finished with 14 points (4/13) and 4 boards.

Obviously it’s easy to look at this game and see only New York’s dysfunction, but don’t overlook the Cavs’ resurgence. They’ve won four-outta-five now, beating Chicago, Denver, Lob City and the Knicks in the last two weeks. Not bad for a team that started 4-12.

Kyrie Irving put the team on his back on Tuesday, leading all players in points (37) and assists (11). He’s had a down year by his standards, averaging about 20 points per game on sub-40 percent shooting, but perhaps this will get the young stud back on the right track.

Jarrett Jack came off the bench for 17, and Tristan Thompson kicked in 12 and 9 in the win.

Same shit, different game for the Knicks, who got 29 and 8 from Carmelo Anthony while Andrea Bargnani, JR Smith, Iman Shumpert, Ray Felton and Metta World Peace combined to shoot 15/46 (32.6 percent). The silver lining in the loss was Amar’e Stoudemire, who came off the bench to shoot 7/10 in 27 minutes. The Knicks, Jazz and Bucks are the League’s only teams with five or fewer wins.

The T-Wolves have a really high ceiling every night, and they burst through it on Tuesday. Kevin Love scored 26 points with 16 rebounds and 7 dimes, knocking down 4 triples and 10 free throws on the way. Nikola Pekovic added 18 points, Ricky Rubio scored 15 with 9 assists (and even hit 5/9 shots!) and Kevin Martin scored 18. The team knocked down 11/24 treys and 28/33 free throws.

The Pistons were no match despite a decent offensive output. Brandon Jennings dropped 20 points to lead the team, while Josh Smith added 17 and Kentavious Caldwell-Pope 16. There weren’t many shots available for Andre Drummond or Greg Monroe, though, as they combined to shoot 9/16.

It’s a big win for Minnesota, who had dropped to 9-11 after an inspiring 7-4 start. I think they’ll be just fine, though there’s very little room for error in the stacked Western Conference.

Boston gave the Nets just about all they could handle on Tuesday night, but Brooklyn was able to hang on for their seventh win of the season.

Deron Williams finally returned and finally looked like Deron Williams. He scored 25 points (10/16) with 7 assists and 2 turnovers. THAT IS MORE LIKE IT. Brook Lopez was an unstoppable offensive force, hitting 10/13 shots on his way to 24 points and… uhh.. 3 rebounds in 37 minutes.

KG looked a lot more like Kevin Garnett than the guy we’ve seen in a Brooklyn jersey for most of the season, and finished with 11 points and 9 boards. Paul Pierce returned from his hand injury and shot 0/3 for 4 points, though he did snag 7 boards. The duo didn’t seem particularly phased by playing against their old team.

The Celtics starters all continued to look good. Avery Bradley scored 22, and has been a far better player since being shifted back to the 2, allowing Jordan Crawford (15 points, 4 assists) to run the show. Jeff Green dropped in 19, Brandon Bass posted 13 and 11 and Jared Sullinger scored 15 with 5 boards.

Battle of the East’s two least watchable teams. Scoring was predictably hard to come by in this one, making Milwaukee’s 75-72 lead with 1:35 left insurmountable for Chicago.

Mike Dunleavy stepped up with Luol Deng, Joakim Noah and Jimmy Butler all sidelined for the Bulls. The vet hit 9/15 shots on his way to 24 points. Carlos Boozer posted 21 and 12 and Tony Snell kicked in 13.

Kirk Hinrich scored 1 point in 40 minutes. A few days ago, he shot 1/10 in 36 minutes, and about three weeks ago, he scored 1 point in an overtime loss against the Jazz. I’ve always liked him as a role guy, but he’s had a tough time adjusting to starter’s minutes in D-Rose’s absence.

These teams played even in the first, third and fourth quarters, but OKC’s 27-18 advantage in the second period proved to be the difference.

Kevin Durant paced Oklahoma City with 30 points, 10 boards and 5 assists. Russell Westbrook added 14, 11 dimes, 9 boards and 4 steals. He hit only 6/21 field goals, but his ability to thrive in other areas of the game on nights when his shot isn’t falling is what makes him so dangerous. Serge Ibaka double-doubled, too, posting 19 and 10 with a pair of blocks.

Atlanta’s leading man was Paul Millsap with 23 points, and his 12 boards were good for a game-high. Jeff Teague and Shelvin Mack each added 17, but guys like Al Horford (3/10) and DeMarre Carroll (2/10) struggled in the loss.

Kobe Bryant’s Mission To Shake Off The RustTM continued last night, as he played 29 minutes in his second game back. He hit 6/11 shots from the floor, 8/8 from the stripe, handed out a few assists and only turned the ball over twice, a welcome sight after his turnover-plagued debut. All in all, pretty good.

As for the game itself, Phoenix led for most of the way and held off a late Lakers push. Goran Dragic exploded for 31 points (11/11 FT, 5 assists). Eric Bledsoe went for 18 and 9, and the Morris brothers combined for 37 off the bench. The surprising early success of those four has helped the Suns win 12 of their first 21 games. They’d be in the Playoffs over the likes of Minnesota, Golden State and Memphis if they started today. Sadly for Phoenix, the season is only about a quarter of the way through.

Other guys played for the Lakers, too. Pau Gasol was solid, scoring 19 points with 5 rebounds, and Steve Blake handed out 10 assists. Jodie Meeks, Nick Young, Xavier Henry and Jordan Hill each chipped in at least 12.

This season, I’ll be posting a semi-random highlight video of a former baller at the bottom of my Post Ups. Today’s clip redefines ‘semi-random,’ but it’s truly amazing footage.

Let’s rewind a handful of decades. Boston had won each title from ’59-62, and led three games to two in the 1963 Finals against LA. If you know your Russell-era Celtics history, you know that the streak of championships wasn’t ended in ’63, and in fact stretched through 1966.

But Jerry West and Elgin Baylor did all they could in that Game 6 against Russell & Co., and, though they ultimately fell short in the deciding game, their performances left us with 12 minutes of 60’s hoop gold: West posted 32 points, 9 dimes and 7 rebounds; Elgin 28 with 8 boards and 8 assists. Somebody graciously cut together each play in which those stats were compiled (along with the original audio recording), as well as a few other plays (8:27!). The original box score is also posted under the video (h/t BasketballReference).

These dudes were modernizing the game in front of everybody’s eyes, and I fully trust that you’ll be as glued to the screen upon watching the film as I was. Enjoy—