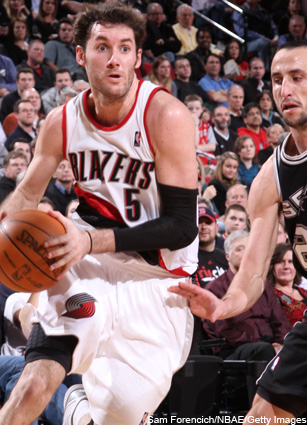 Thursdays belong to TNT in my world. The light schedule would normally bother me because I like options and also like games playing in the background while I write, but on Thursday it feels right. Almost as if it’s easing me into the weekend, which is always, always far busier than my Monday-Friday.

We’ve got the Kings on Sunday and I can’t wait. Excited to see Mr. Tyreke Evans in person.

Now, LeBron. I could handle seeing him in person two, three, twelve times against. The guy is just so good. I don’t even know what else there is to say. Last night, it was his passing that got me. Love to see him get the ball, and he’s looking ahead, already knowing where his teammates are going to go and where he needs to get the ball.

Cleveland won their 10th straight game last night, pulling away from the Heat in the second half to get the 102-86 victory. It was a four-point game at the half, and then the Cavs pulled away steadily and the game was never really in doubt in the fourth quarter.

Wade went cold in the second, and his shots all looked short. Probably a result of the Heat playing the night before in Boston.

The Cavs are fun playing with this big lineup. How good has J.J. Hickson become all of a sudden? Maybe it’s been a gradual improvement, but every time I see the Cavs, he’s so active. His energy seems to get everyone else on his team fired up, too. Last night he had the dunk on Dwyane Wade and then –even more impress– was the block on Wade in the second half.

LeBron attempted 21 free throws, which seems insane, but the guy is just unstoppable when he drives to the hoop. I don’t know what else you can do except foul him. He finished with 36 points, eight rebounds and seven assists.

Daniel Gibson missed the first half after being with his pregnant fiancee Keyshia Cole, who was hospitalized for precautionary reasons. He arrived to the arena and was in uniform on the bench before the second quarter was through. Yikes.

Man. I feel like so many of my Thursdays end with the Blazers pulling off a crazy run, or finding themselves in a close game and wild finish. Last night was no different, with the Blazers coming from behind to get the 96-93 victory against the Spurs.

Loved seeing Brandon Roy on the bench fist-pumping and grinning throughout the fourth quarter. He had good reason, with his teammates racing back in the fourth from 10-down to take the lead late and hold off the Spurs in a furious final two minutes. Wow. Portland outscored the Spurs 30-19 in the final quarter and they did so without Brandon Roy, while also losing Jerryd Bayless to a knee injury.

Somehow though, they keep finding ways to pull together and win. LaMarcus Aldridge was awesome, finishing with 28 points and 13 boards and Martell Webster hit all five of his 3-point attempts as he scored 21 on the night. Andre Miller had an 11-point, 10 assist double-double. He also had the boneheaded play of the night when he fouled George Hill. When Hill hit the first free throw and missed the second on purpose, meaning the Spurs could have gotten the board and made a three. Luckily for the Portland crowd, this didn’t happen.

Oh, yes. Mike Dunleavy stepped down as the Clippers coach. I wasn’t really expecting that to go down yesterday. Also, Paul Pierce is hoping to make a return to the court on Sunday against the Magic. For some reason, I don’t feel like he’ll be good to go by then, but I hope so, for his sake!

Okay, have a great Superbowl weekend, everyone!