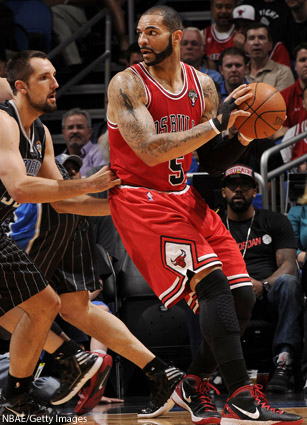 A six-pack to attack, let’s get it.

I feel like I’ve written this before, but here goes: What’s the best cure to a 3-game losing streak? Playing the Bobcats, of course. Charlotte was outrebounded 51-31 and shot worse than 39 percent, while allowing Philadelphia to shoot better than 53 percent from the field, and the ‘Cats starters combined for only 42 points. The Sixers got 20 points apiece from Jrue Holiday and Thaddeus Young, while Spencer Hawes continues to get his strength back, last night finishing with 13 points, 11 rebounds and 3 blocks in 24 minutes as a starter. Evan Turner shot 3-11 and scored just 6 points, but his Philly teammates were scorching hot, and the Bobcats were not. The Sixers still hold a 1.5-game lead over Boston in the Atlantic Division.

Cleveland might not have it so bad after all—if last night’s performance was any indication of the pair of rookies they selected in this past year’s Draft, things are certainly looking up. As for the Nets, well, Brooklyn! Tristan Thompson scored a career-high 27 points and pulled down 12 boards, and Kyrie Irving poured in 26 points plus 7 assists and 5 rebounds as the Cavs snapped a 3-game losing skid. Thompson gave the Cavaliers the game’s final lead on a tip-in with 1:11 to play (off a Kyrie driving miss) for 2 of Cleveland’s 66 points in the paint on the night. Deron Williams (28 points, 8 dimes) and Gerald Wallace (27 points, 12 boards) tried to will New Jersey back into the game, but it was too little, too late for the Nets, who have lost 3 straight. DWill committed a costly turnover with less than 20 seconds to play and New Jersey down by 3, sealing the Nets’ fate.

Calling this game a low-scoring affair would be putting it nicely, as each team shot 39 percent from the field and had 17 turnovers. But in the end, Boston rattled off a 13-0 fourth-quarter run on the strength of Ray Allen’s outside shooting and squeaked out the win. The Celtics had to hold off a super surge from the Hawks in the closing moments, as Joe Johnson (game-high 25 points) drilled three 3-pointers, including one that pulled ATL within 1 with 11.6 seconds left to play. Even on a forgettable shooting night for Josh Smith (5-20), he still put together a 10-11-8 line. But Boston improved to 24-21 behind 19 points from Allen, 16 from Garnett and 10 points, 13 dimes and 6 swipes from Rajon Rondo.

Chicago continues to roll without Derrick Rose, and last night the Bulls did it in damn impressive fashion, holding the Magic to 59 points—the fewest Chicago has ever allowed in franchise history. Carlos Boozer killed Orlando all night, finishing with 24 points and 13 rebounds, and backup point guard John Lucas dropped 20 off the bench (on a night when fill-in starter CJ Watson shot 0-8 from the field and scored just 1 point) as Tom Thibodeau became the quickest coach in NBA history to get to 100 wins. The Bulls are 3-1 with Rose resting his sore groin and an NBA-best 38-10 overall. The Magic, meanwhile, couldn’t hit water from a boat—they shot 35 percent from the field, got double-digit scoring nights from only two players (Dwight Howard scored 18 and Ryan Anderson had 10) and ended the night with only 9 assists compared to 18 turnovers. That’s losses on consecutive nights to Miami and Chicago for Howard and company. Not much else to report from this game, other than that I’m about ready to nominate Chris Duhon as the L’s worst rotation player. He’d fit right in at the bi-weekly (and potentially now-extinct) SLAM pick-up runs.

In a game that was really never that close, there was plenty to look at. For starters, Dirk Nowitzki had a sick game—33 points on 12-19 shooting, 11 rebounds and 6 assists—in leading the defending Champs to 27-20 on the year, which puts Dallas just a half-game back of the Clippers’ for the No. 4 spot in the West. Then, there was the much-anticipated duo of “debuts” for Denver. Alliterations aside, Wilson Chandler scored 13 points in 28 minutes, while Javale McGee sat nailed to the bench even in a blowout. And a blowout it was, as the Mavs shot 54 percent from the field, outscored the Nuggets in every quarter, totaled 33 assists as a team and led by as many as 22. Dallas had 6 players in double figures scoring-wise, while Arron Afflalo led the Nuggs with 24. But hey, let’s give the Nuggets (25-21) and their fans a break—they were clearly distracted.

Richard Jefferson hit a corner 3-pointer with just over six minutes to go in the fourth quarter, giving Golden State an 86-85 lead, but Minnesota then ripped off the next 8 points without a single tally from the Dubs, and the Timberwolves improved to 23-24 behind a monster game from Kevin Love. The bearded big man turned in a 36-point, 17-rebound performance while logging a game-high 44 minutes. The Wolves took a 14-point lead into halftime before seeing it evaporate thanks to a big third quarter from the Warriors, who were led in scoring by David Lee’s 25 points. For as uptempo as Golden State likes to play, they protected the ball well, turning it over just 8 times (17 for Minny), but the Wolves dominated on the boards (48 rebounds to 33 for GSW) and Stephen Curry remains on the mend.

Dunks of the Night: Jeff Teague and Deron Williams do the honors.

Tonight: Of the seven games set for Tuesday, only one pits two sub-.500 teams against each other, which means we’ve got six good matchups to talk about tomorrow, including Clippers at Pacers, Lakers at Rockets and Thunder at Jazz.