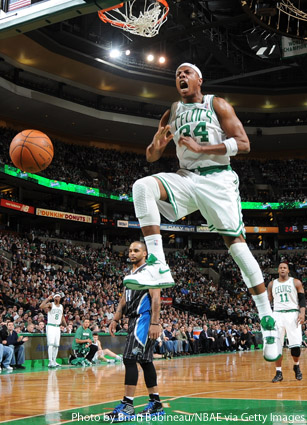 All-Star Weekend is considered to be the midseason break in professional hoops, but in reality, the ASG is actually somewhere around the two-thirds point. Martin Luther King, Jr. Day, meanwhile, signals that the regular season is halfway through, and the NBA responds by  flooding the day with basketball; this one featured 13 games, in total. For those of you with a day off from work or school, you were able to sit around in your underwear and watch the competition pretty much nonstop, from morning through the night. For those of you who weren’t so fortunate, you get an ultra-sized Post Up to help you get all caught up. And for me, well, I have a whole bunch of typing to do. But it’s all good. Let’s get to it.

Steve Nash, Amar’e Stoudemire and Mike D’Antoni reunited, once again. These days, NYC is a slightly more desirable hoops city than Phoenix, but it didn’t matter last night, when the Suns came to town and had their way with the Knicks. A one-point halftime lead turned into a nine-point lead after three, and Coach Gentry’s guys hung on from there, getting strong efforts from Nash (15 points, 11 assists), Grant Hill (25 points) and, um, Vince Carter, who stepped up to the tune of 29 points and 12 boards. After three straight Knick losses, including a bad one to the Kings, that whole “They don’t even need Carmelo” talk can now officially be put to bed.

Well, nobody can say the Wizards don’t have talent, and when that talent plays to its potential, they can beat just about anyone. Yesterday this was proved, as the Wiz shot 53.5 percent from the floor and got 65 combined points from Nick Young (25), Andray Blatche (21) and John Wall (19, plus 15 dimes). Deron Williams led the Jazz with 28, though it wasn’t enough, as Utah began a five-game road trip with an L.

Hard to believe Derrick Rose didn’t have a triple-double till yesterday, but yep, that was the case. No longer, though, as DRose put up a pretty 22-10-12 line and led the Bulls over the Grizzlies easily. Luol Deng scored 28 and was the team’s leading scorer, while Zach Randolph’s 21 and 13 effort led the Grizz, who shot just 37.7 percent from the field. The W makes three straight for Chicago.

Two teams fighting for one of the final spots in the Eastern Conference Playoffs went head-to-head, and the result was a competitive, defensive battle. Neither group scored higher than 39 percent from the floor, and the scrappiness continued through regulation and into overtime, where in the final minute the Sixers got a big hoop from Andre Iguodala (16 points, 10 rebounds) and a nice defensive stand on the other end to seal it up. Boris Diaw sneakily pulled himself a triple-double, managing 25 points, 11 rebounds and 11 assists, while Lou Williams led Philly in scoring with 23. (Also: Allowing “Why Always?” Boris to pull a triple-double is one thing, but letting Kwame Brown manage a 15 and 16 line? Not a good look, Sixers.) Philly’s now tied at seventh in the East, while the ‘Cats stand at ninth, 1.5 games out of postseason contention.

Another low-scoring affair, though this one didn’t need overtime before a winner was named. After 47 back-and-forth minutes, the Bees smothered Amir Johnson’s game-tying attempt, icing the contest and defeating their fifth straight opponent. David West and Emeka Okafor combined for 40 points and 26 boards (aka “Kevin Love numbers”) in the victory.

Snapping a four-game losing streak, the Rockets took care of business against a Bucks squad that seems to be missing Brandon Jennings more and more. Kevin Martin dropped 36, while Jordan (C)Hill notched a 10 and 10 double-double. How they won while also shooting 36.8 percent from the field is beyond me, but probably doesn’t speak well of Milwaukee’s effort.

It was easy to blame the Mavs’ struggles on the Dirk Nowitzki’s absence, but now that he’s returned, this just ain’t gonna cut it. They’ve dropped six in a row, and closed out a four-road trip, in, um, whatever the opposite of “style” is. The Pistons just dominated them, getting 39 combined points from Rodney Stuckey and Tayshaun Prince, and Charlie Villanueva added 15 points off the bench. Meanwhile, Dirk did his job, dropping 32, as did Jason Terry, who put in 18, but there was little zero production from anyone else. Blame it on Caron Butler (out for the season, or Tyson Chandler (out for the game with an illness), or just the fact that this veteran-laden group is picking up some fatigue, but either way, this is becoming a problem. Are the Mavs due for a Magic-like midseason overhaul?

Hot damn, Blake Griffin! The Pacers frontline was just no match for dude, who powered through Roy Hibbert, Tyler Hansbrough and the rest of the Indiana whiteboys, amassing a whopping 47 points and 14 boards. (Previously Monta Ellis and Paul Millsap had the ’10-11 season-high with 46 points.) The Clippers jumped ahead with a solid fourth quarter, and held off Indiana’s comeback attempts by, essentially, just dumping it to Griffin every play—though both Eric Gordon (23 points) and Baron Davis (14 points) were solid. LAC has now won five of six, and, yeah, just see yesterday’s Post Up for my mini-Clippers rant.

Utilizing a big man to pass in the ball during end-of-game situations is a pretty common practice by now, as it helps get a pass in cleanly over the in-bounds defender. But using a rookie, and one not exactly well known for basketball IQ? I don’t know about that move, but it’s exactly what Coach Westphal attempted, handing the rock over to DeMarcus Cousins with 0.6 seconds to go, with the Kings holding possession, down two. This might come as a shocker, but Cousins threw it away, and the Hawks squeaked away from the Kings with a W. Joe Johnson scored 36, including a pair of clutch late free throws, while Cousins led Sacto with 20.

The biggest undertone to the Melo-to-the-nets saga is that Anthony actually has to sign off on an extension for a deal to go through, meaning the Nets need to be a somewhat desirable destination. And right now, simply put, they ain’t. New Jersey dropped another one last night, losing to an energetic Warriors squad led by Monta Ellis (26 points) and David Lee (24 points, 10 boards). Brook Lopez scored 20 for the losing group.

Always good to get a playoff atmosphere going during the regular season, and that’s exactly what we saw when these two Eastern Conference powerhouses went up against one another. They traded blows all game, fighting until the final minute, when Boston made some big stops and held on for the win. Ray Allen was a machine, hitting some huge threes and leading the Celts with 26, while Rajon Rondo scored 10 and dished 13. Dwight Howard put up a strong performance as well, going for 33 and 13, and Ryan Anderson shocked everyone (including himself, most likely) by putting in 16 points. I’m not exactly breaking news when I say this, but a (or, another) playoff series between the Celts and Magic would (will?) be pretty damn awesome.

Portland’s been on and off as of late, but against the TWolves, they found a way to put things together long enough to get a victory. LaMarcus Aldridge was a beast, putting up 37 points and 12 boards, and continues to make a half-decent pitch at an All-Star Game selection. It’ll be tough for him to get ahead of his frontcourt opponent last night, though, as Kevin Love went for 22 and 17 in the loss.

One…last…game. Long day, folks. The night cap was a Thunder-Lakers battle, featuring lots of experience against, you know, a team with not so much. L.A. used all of that to their advantage, stepping up to the plate and outperforming the underdogs in the final few minutes of action. Russ Westbrook (32 points, 12 dimes) tried his best to keep his squad in it, but Kobe (21 points, 7 assists) and company were too much, making big stops and holding OKC off at the game’s end.

Moment of the Night: How do I choose one moment out of hundreds (thousands?) of minutes of hoops? Let’s go with this: The climax of the night’s primetime matchup. (H/T: @Jose3030) Check it: