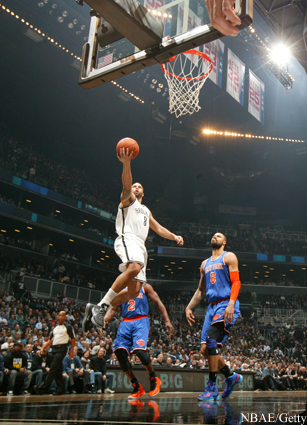 Though it was only the thirteenth game of the season for both teams, the atmosphere had a similar feel to a Playoff game. This one was close throughout and one thing is for sure: the Nets are for real. The two teams matched up very well and whenever one made a run, the other would counter with a run of their own, and neither team led by more than seven. But in the end, the Nets–aided by a few huge Jerry Stackhouse three-pointers–outlasted the crosstown (no, I will not call rivals yet) Knicks.

With the game coming down to the wire, Brook Lopez had a chance to put the Nets up when he stepped to the free throw line. Instead, Lopez missed his second, leaving the game tied up with 22 seconds to play. The Knicks had a chance to win but a jumper from the wing by Melo fell short and provided the New York City faithful with some free basketball. In the extra session, Stackhouse hit a three with three and a half minutes to go that broke the tie and gave New Jers–ahem–Brooklyn all the momentum and propelled them to a victory over the Knicks.

— New York only had 14 assists on 33 made shots. They really missed Jason Kidd last night.

— Melo ended up with 35 and 13 boards but he also missed six free throws. Tyson Chandler scored a career-high 28 points and was a bully down low on both ends of the floor.

— Reggie Evans is such a pain in the ass.

— Ray Felton had a terrible game. But that’s my dude, so I’ll just leave it at that.

The Wizards’ season just continues to get worse and their schedule doesn’t get any easier with the Blazers, Knicks and Heat coming up this week. The Wiz were close after the first, trailing by four, but in the second the Spurs shifted into a different gear and the rout was on. With three minutes to go in the first half, the Spurs ripped off a 10-0 run and took a 60-48 lead into the half. The Wizards never sniffed the Spurs again as San Antonio pushed the lead to as many as 29. Seven San Antonio players scored in double-figures, including Boris Diaw (16), Tiago Splitter (15 and 12 boards) and Tony Parker (15 in 22 minutes).

— Nene missed the game with a sore foot.

— Jamal Crawford led the Wiz with 19.

A game between two teams who probably won’t be making much noise late in the season featured interesting individual matchups between point guards Brandon Knight and Dame Lillard and forward/centers Greg Monroe and LaMarcus Aldridge. The Pistons second year PG got the best of Lillard, going for a season-high 26 points while holding Lillard to a season-low 12 on 4-18 shooting. Down in the post (dawg), Aldridge went for a season-high of his own with 32 points and grabbed 10 boards while Monroe had his usual 20 and 10.

The rest of the game was pretty good, too. The Blazers went on a 7-0 run late in the third, cutting the deficit to four. Detroit, who has had a habit of letting double-digit leads shrink in each of their home losses, responded with a 7-2 run to finish the quarter, highlighted by a Kyle Singler three in the last second to push the lead to nine. Detroit opened the fourth with threes from Rodney Stuckey and Charlie Villanueva to make it a 13-point game. The contest never got closer than six after that.

— Kyle Singler has been giving Detroit some good minutes as of late. Last night he started at the two and finished with 16 points on 6-7 shooting and 10 boards in 36 minutes of play.

The Bulls have certainly had the Bucks number lately, having beaten them nine-straight times. Last night, Chicago jumped out to a 27-point lead and looked like they were on easy street en route to their tenth straight dub over Milwaukee. Instead, the Bucks used a huge fourth quarter to climb back and stun the Bulls in Chicago.

Chicago led by ten at the half then hit five three-pointers in the third quarter to extend the lead to 27. That should have been good enough but the Bulls only hit five of their last 22 shots. The Bucks took full advantage of their opponents’ sudden cold streak by scoring the last six points of the third quarter and going on a 13-0 run to open the fourth quarter. The run was led by reserves Ersan Illyasova, Ekpe Udoh, Beno Udrich, Mike Dunleavy and Doron Lamb who played the entire fourth quarter. The group eventually finished the game on a 31-4 run and after Rip Hamilton’s buzzer-beater rimmed out, the Bucks walked off the floor victorious while Bulls fans left the United Center in disgust.

— With Brandon Jennings limited due to an ankle injury and Monta Ellis having an off night, the Bucks bench came up huge. Illyasova finished with a season-high 18 points (14 in the second half) and the five reserves who ended the game finished with an average of +19.

— Rookie John Henson got his first start and finished with 11 points in under 15 minutes.

Though they struggled without Mike Conley (flu) and trailed most of the game, Memphis eventually pulled out the win on their home court and continued their great start to the season. The Cavs came out hot, shooting 50 percent for much of the game and really giving the superior Grizzlies a run for their money. But in the fourth, Memphis outscored Cleveland 22-9 which was enough for them to get ahead and stay ahead through the end of regulation. Tony Allen’s clutch defense proved to be key. The lockdown defender came up with two huge steals that sprung a 10-2 run in the fourth and carried the Grizz to victory. Anderson Varaejo continues to play tremendous basketball and last night he snatched 22 boards (to go along with 15 points) which were more than Marc Gasol, Zach Randolph and Rudy Gay combined.

— Zach Randolph ended his double-double streak at 11 games with a 19-point, 8-rebound effort.

— The Grizz only had 16 assists as a team which was only one more than their season low of 15.

— Dion Waiters scored 15 for the Cavs.

The Nuggets jumped out to an early 16-point lead and threatened to run Utah off the court with their uptempo style. Instead of succumbing to the Nuggs’ fast break, the Jazz went big and used their physical style of play to get themselves back in the game. After allowing the Nuggets to shoot 73 percent from the field in the first half, the Jazz finally turned it up on defense and started to take away the easy looks Denver was used to and held them to 36.1 percent shooting in the second half. Down 11 at the half, Utah found an offensive spark in the third quarter and broke off an impressive 14-0 run. First Marvin Williams and Al Jefferson each hit layups then the Jazz scored eight points in under a minute due largely in part to back-to-back three’s by Williams and Randy Foye. When they were finally done, the Jazz looked at the scoreboard and saw that their halftime deficit was now a two-point lead.

Late in the fourth, Derrick Favors came up big. The 6-10 post presence finished with 19 points and 7 boards but it was his free throw shooting that proved to be the difference. After Andre Miller tied it up at 102 with under a minute to go, Favors grabbed an offensive rebound, got fouled and sank both of his freebies. Miller then attempted and missed a three and Favors was right there waiting for another offensive rebound. He was once again fouled and hit one of two on the other end with under six seconds to go. The Nuggets had one more chance to win or tie but couldn’t get a shot off as the clock hit zero.

— Al Jefferson finished with 28 points and 5 boards and Jamaal Tinsley chipped in with a season-high 15 points and 6 dimes.

— Kenny Faried had 21 and 9 for Denver and Ty Lawson scored 16 and dished out 9 assists.

Nine three-pointers and 33 points from Caron Butler wasn’t enough for the Clippers to beat the Hornets at home last night. New Orleans completely shut down Blake Griffin, holding him to a career-low four points on 1-9 shooting. The Hornets, on the other hand, got big contributions from Greivis Vasquez, Ryan Anderson, Jason Smith and Austin Rivers. Vasquez finished with 25 points and 10 dimes, Anderson and Smith each with 17 and Rivers with 14. ‘Nawlins took an 11-point lead into the final quarter and eventually stretched their lead to 17 after Vasquez hit his fifth three-pointer of the game. LA got as close as six with under two minutes to play but they went cold from deep and the Hornets hung on for a much needed win.

— This was only the fourth time in 173 games that Griffin failed to reach double-figures.