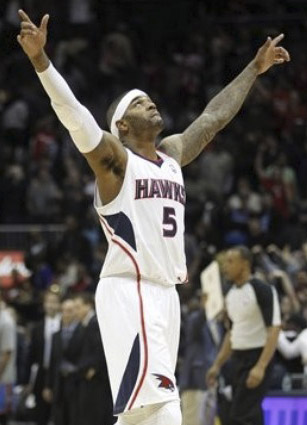 Some big performances last night from some of the games best power forwards, catch up on all the action below…

In a battle of former number one picks John Wall and Kyrie Irving; it was Jordan Crawford who proved to be the difference maker in a highly competitive game. Crawford finished with 31 points (with a career-high five 3’s), including 12 in the fourth quarter that pushed the Wizards lead to 10 with under four minutes to go. The Cavs got out to a hot start, taking a 33-24 lead into the second quarter thanks to 15 points from Antawn Jamison (29 and 9 boards), but the Wiz responded with nine straight points from Roger Mason Jr., including a four-point play. Irving and Wall did not disappoint; Kyrie finished with 20 points and 6 assists and Wall ended the game with 24 points and 5 dimes. But, the Cavs had no answer for Crawford who has been on fire as of late. The former Xavier star has been averaging 21.8 points on 52.8 percent from the field over the last eight games.

Before I get into the specifics of this game, I gotta give a huge shoutout to J-Smoove for that dunk over Serge Ibaka…that was just filthy. The Hawks have been banged up as of late, missing both Al Horford and Joe Johnson, but Josh Smith has picked up the slack and put the team on his back. The Thunder entered last night’s game riding a seven-game winning streak but had no answer for Smith, who simply dominated the game. Smith scored 13 of the Hawks final 15 points and grabbed seven boards to finish with 3o points, 12 boards and 7 assists and sealed a surprising 97-90 win at home. The Hawks outscored the Thunder 42-26 in the paint and won the turnover battle 21-12; two crucial stats that negated OKC’s 20-4 advantage on the break. Kevin Durant finished with a game high 35 points and 8 boards and Russell Westbrook had 25 points and 4 dimes, but they didn’t get much help elsewhere. James Harden only had 10 off the bench and the frontcourt of Kendrick Perkins and Ibaka combined for 12 points and 11 boards. ATL has a chance to make up some ground in the East when they face the Pacers and Heat on Monday and Wednesday.

The Bucks didn’t go down without a fight; they crawled back from an 18-point deficit but fell apart in the fourth as six Magic players finished in double-figures. Dwight Howard led the charge with 28 points and 14 boards, Jason Richardson had 18, Ryan Anderson and Turkoglu each had 16 and J.J. Reddick had 14 off the bench. I’ve said it once before and I’ll say it again, when the Magic are clicking on all cylinders and hitting their jumpers, they are damn near unstoppable. Brandon Jennings had his second straight high scoring performance, this time going for 27 points on 9-17 shooting and Ersan Ilyasova finished with 18 points and 7 boards. The Bucks shot 65 percent in the third quarter, but lost their touch in the fourth as they shot  7-23 and had five turnovers which ended any hopes of coming back in this one.

Trailing 78-76 with a little over 8 minutes to play, the Griz went on an explosive 17-0 run over the next 5 minutes and 40 seconds to take a 15-point lead with 2 and a half to go. During that stretch, it looked as if the Pistons forgot how to play basketball; they went 0-6 from the field, turned the ball over five times and committed two shot clock violations. Seven Grizzlies scored in double figures including Mike Conley, who stuffed the stat sheet with 10 points, 12 assists and 4 steals. O.J. Mayo hit five 3’s coming off the bench and led the team with 17 points while Marc Gasol finished with 17 and 9 boards. The Pistons shot under 40 percent from the field and looked incredibly flustered by the Grizzlies defense in the second half. Rodney Stuckey finished with 20 points and Greg Monroe had 14 points and 11 boards. Bench play proved to be a key part of this game as the Grizzlies bench outscored Detroit’s 31-11.

In David West’s return to New Orleans, the big man had 14 points and 13 boards to lead the Pacers to an easy dub on the road. The Pacers went on a 21-4 run in the second quarter that gave them a 54-37 lead heading into the break which put the game out of reach. Danny Granger finished with 20 points and Darren Collison finished with 13 points and 4 assists to pace Indy. Jarrett Jack, who has quietly been having a nice year, finished with 18 points and 3 assists and Solomon Jones had 12 points and 9 boards off the bench, but this one was over by halftime.

One night after I questioned whether the Mavs had it all together, Dirk Nowitzki came out and dropped 40, including 10 in the fourth, on the Jazz to lead Dallas to a victory at home. The Jazz made things interesting by cutting a 23-point deficit down to five in the fourth, but they had no answer for Dirk. Lamar Odom, who was supposed to play for the Mavs D-League affiliate last night, was recalled and scored nine points in 18 minutes; here’s hoping he can finish the season strong. Utah beat up on the Mavs inside, outscoring Dallas 52-24 in the paint thanks to Paul Millsap’s 24 points and Derrick Favors 13 off the bench. But, the defending champs were too strong offensively as JET dropped 22 off the bench to go along with Dirk’s 40. As the game got closer in the fourth, the Mavs never panicked and the vets took over to put away a pesky Jazz team.

For the first time since 2005, the T’Wolves traveled to Portland and walked out with the victory. Kevin Love must have been feeling energized playing back in his hometown; the All-Star scored a season-high 42 points and grabbed 10 boards and absolutely dominated inside. The reigning 3-point shootout champ also hit five 3’s in eight attempts as Minnesota closed out its four game West Coast trip with a victory. The Blazers have now lost nine out of their last 13 and despite strong performances from Jamal Crawford (23 points), Nicolas Batum (29 points) and Gerald Wallace (25 and 14 boards), Portland couldn’t stop the Timberwolves. The Blazers allowed the T’Wolves to shoot 54 percent from the field which completely erased their strong offensive output. Martell Webster finished with 21 off the bench and rookie Derrick Williams chipped in with 15 for the Wolves.

Stat Line of the Night: Josh Smith continued his hot start to the second half with a 30-point, 12-rebound, 4-assist, 1-steal, 1-block performance.

Play of the Night: J-Smoove over Ibaka

Dunks of the Night: Kevin Durant with the rim-rocker.

Jan Vesely on the break; I know Abe was hype over this one!

Throwback Moment of the Night: A.I. steps over Tyronn Lue. No particular reason for this; just feeling nostalgic for some classic Iverson.

Tonight: Abe is back to take you through a tremendous slate of games that kicks off at 1 PM Eastern when the Knicks travel to Boston to face on the Celtics. Thanks for rocking with me, catch y’all next time.