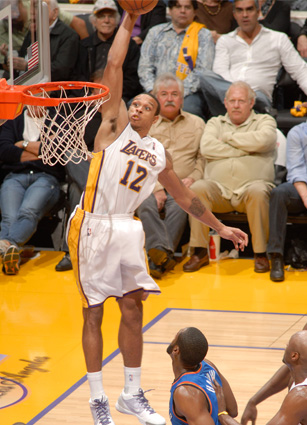 Oh my word, the day isn’t even here and I’m not sure how I’m going to make it through. It’s one of those Mondays where I’ve got 80 million things to do, besides work and practice. Bah. Also was talking to our boy, Tzvi last night and the two of us lamented over the fact that neither has gone grocery shopping since way before the NBA regular season has started.

What the hell have I been doing with my life? Watching bball. Writing about bball. Going to practice. And loving every minute. My diet hasn’t been as balanced as it should be, my sleeping schedule is more non-existant than ever, but dammit if I don’t love this game more today than I did yesterday.

Even when I get assigned liveblogs for games that end up as blowouts every single time. Last night, it was the Thunder/Lakers game and LA was up by 20 before the first quarter was through. They scored more in the opening quarter than the Thunder did in the first half and in the fourth we had the Shannon Brown highlight reel which makes any blowout worth watching. Loved the Lakers announcers jumping on the dunk contest bandwagon.

Kobe’s behind the backboard shot was ridiculous. His entire first quarter was foolish. He is 14 years in and still adding moves and plays to his own highlight reel. He’s such a special player, I really don’t have the words or at least, coherent enough thoughts right now to try and convey the legacy he’s buildling game by game.

Um… the Nets. We could talk about them after every loss (and I think we do), but man. Can they just get the win. I don’t care against who, I don’t care how it happens, just someone, let them win.

On the opposite end of the spectrum, the Magic. They were in town to face the Raptors yesterday (check my nba.com gamer here), and they are just solid, committed and deep. With Dwight, Rashard and Vince all on the bench to start the fourth, their bench handled business until they could come back into the game and finish things off.

Even without Jameer, the Magic looked solid. Our boy, Whit Eboy played 39 minutes in the game yesterday and that could end up being a concern for the team, but right now they looked good. And, of course, playing against the Raptors, J.J. Redick looked amazing. The rims love him here in Toronto.

Want to know who else is balling and deserves some love for the heart they’ve shown without their leader? New Orleans, shawty. Taking down the Hawks, then coming into Miami on the road and putting up serious fight, falling 102-101 to a Heat team that was looking for a victory after losing to the Raptors Friday night.

Rookie love. Collison and Thornton have given Hornets fans a reason to smile. As much as I’m loving them, CP3, get well soon. I miss your pretty passes, lots.

Anyone else loving Will Bynum? Happy to see him making the most of his minutes in Detroit. That team, I just don’t know what to think about them. You know how every team has an identity, a feel? I don’t feel like I’ve got any sense of who/what Detroit is. The game against the Suns last night was just horrific with Phoenix winning 117-91. Of course, the injuries to Rip and Tayshaun have really hurt the Pistons, but eh. Pistons fans, what are you thinking/feeling about your team right now?

Denver really, really would scare me, if I was playing in the Western Conference. Yes, the Lakers are insane and they played Denver without Pau Gasol, but Denver is just crazy deep and aggressive and intense when they want to be. They’ve had some surprising losses, but the homecourt advantage that they have is nuts. 5-0 at home to start the season and the losses appear to come when they think they can just “flip the switch,” which they seem to be able to do, at home.

If I’m in the West, I want to do all that I can to get homecourt and avoid the Nuggets in the end. Please, tell me you saw J.R.’s 360-layup the other night? He’s so insanely good when he wants to be, just like his team.

Oh yeah, watching Dwyane Wade do his little pull ups on the net pregame was pretty fun. I love the little moments that we see on t.v. each night, coming to life from media row. That’s one of my favorites. LeBron and the talc, KG during player intros, you know the moments.

Yesterday it was Vince Carter raising his hand into the air before tip off as the crowd went wild with boos.

I didn’t see the Knicks/Celtics game, but two things: C’s shouldn’t have needed overtime against a Knicks team that were on the end of a back to back and what the hell was Al Harrington doing, popping his jersey to the crowd after hitting one of two free throws to tie the game in the final seconds of regulation? I mean, yay, you tied the game, but had you made both, you could have won it. Show a little restraint, maybe?