Chris Bosh and Flash combined for 42 points, while Hassan Whiteside swatted 10 shots in a triple-double. 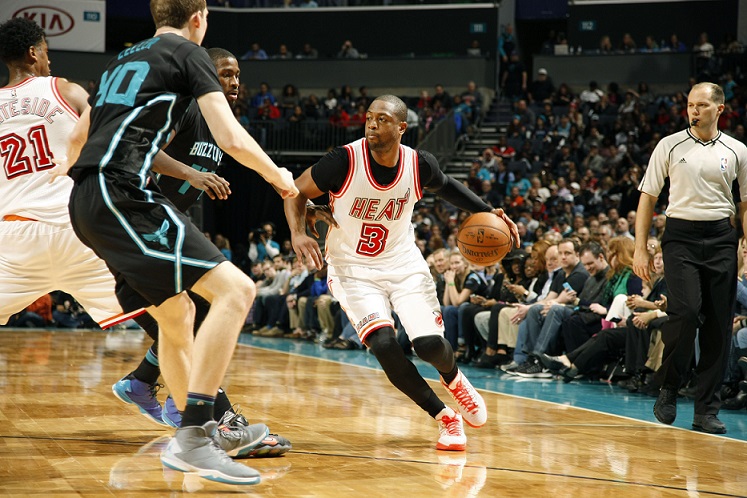 On the heels of a feel-good home victory against the Cavaliers, the Hornets dropped a tightly contested match-up with Miami. Despite receiving 27 points from Marvin Williams and a combined 41 from Kemba Walker and Nicolas Batum, Charlotte was out-gunned by the triumvirate of Dwyane Wade (22 points), Chris Bosh (20 points), and Hassan Whiteside (triple-double with 10 boards). All was not lost for Charlotte fans, however, as seven-time All-Star Alonzo Mourning was honored in front of the Time Warner Cable Arena crowd.

The Pacers fell to 11-16 on the road despite 31 points and a once-in-a-lifetime Hail Mary from Paul George. Al Horford (21 points, seven boards) staked his claim as one of the league’s unheralded big men with a monstrous slam over Solomon Hill.

John Wall — who notched a triple-double with 18 points, 13 boards, and 10 dimes — guided the Wizards to 52.4 percent shooting from the field, helping Washington snap a two-game skid. The stumbling 76ers displayed style in the form of this reverse alley-oop, but had little substance to go with it; the team has now dropped five of their last six.

“Never in my wildest imagination did I see Lance Stephenson playing the four,” Clippers coach Doc Rivers said. “We have found something. You can’t guard him at the four. You can’t put a four on him and every team that’s tried to do that, it has been good for us.”

To their credit, the Knicks held their own against Memphis without the services of Carmelo Anthony and Lance Thomas. A strong stat line from Kristaps Porzingis, however, wasn’t enough to stave off Jeff Green (16 points) and the Nuggets.

If DeMarcus Cousins’ performance flew under the radar, it was due to him being one of three players around the league to post a triple-double on Friday. Scoring 24 points with 10 boards and 10 dimes, Boogie was one of three Kings to impress at the Barclays Center — Darren Collison came off the bench to drop 25 while Rajon Rondo distributed 15 assists to go with 15 points.

The lowly Nets, however, rained on Sacramento’s parade. Big nights from Joe Johnson, Brook Lopez, and Bojan Bogdanovic (7-of-9 from beyond the arc) left the Kings despondent, and fans wondering if George Karl’s time as coach has come to an end.

Rondo: "It has nothing to do with the coaches. It's about us. We don't sacrifice enough to do what it takes to win consecutive games."

Avery Bradley may have gotten crossed up on this sick Kyrie Irving move, but he closed the show for Boston with a buzzer-beating corner three. The resurgent Celtics have now won eight of their last nine, overcoming a 30-point showing from LeBron James.

It’s probably a bad sign when Charlie Villanueva and Justin Anderson are the Mavs’ top scorers. With Zaza Pachulia getting tossed in the third quarter, and coach Rick Carlisle’s starting unit combining for just 32 points, the Mavericks looked fatigued in a rout from Kawhi Leonard (23 points) and the Spurs. San Antonio will hope to keep up the strong play in Manu Ginobili’s absence.

Friday’s loss to the Nuggets was a disconcerting one for Bulls fans. After suffering a sprained knee, Jimmy Butler remained in the game to complete his free throws before leaving the arena on crutches.

The bravery of Butler can’t be undersold; he’s staked his claim as an organizational leader who will leave it all on the court. The conversation now shifts onto coach Fred Hoiberg and his staff for keeping a visibly injured player in the game. While Butler wouldn’t have been eligible for a return otherwise, he likely would have benefited from medical attention prior to the free throws.

23 points from Rodney Hood and an impressive double-double from Derrick Favors (11 points, 15 boards) helped Utah pull away from the Bucks in Friday’s narrow victory. Miles Plumlee raised eyebrows by mixing it up with Joe Ingles; the former Blue Devil looked to have delivered a forearm shiver to the back of Ingles’ head, resulting in a Flagrant-2. What do you think: clean play, or a cheap shot from the Milwaukee big man?