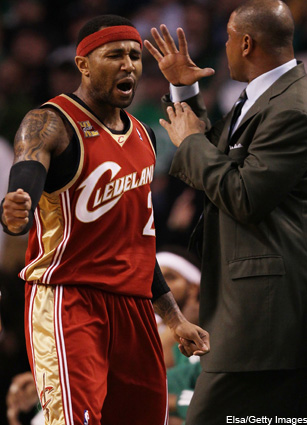 It’s a Friday and the Cavs are in town. It’s going to be a good night. No, I don’t want you to think of that God awful song when you hear that sentence, you know the one that every arena still insists on playing, even though it’s beyond overkill. It’s just really going to be a good night. Sure, LeBron is in town, but, um, so is Leon Powe and you know how we feel about Mr. Powe around here. Can’t wait.

Okay, so the Cavs are in town, perhaps without Shaq after he sprained a thumb in the first quarter of the Cavs 108-88 victory over the Celtics.

I’m not kidding. After the C’s shot 60 percent for the first half and led throughout the first three quarters, the Cavs were within one going into the fourth and then Boston fell apart on their home floor. Getting outscored 35-14 over the final 12 minutes, it was ugly. Ugly, ugly.

LeBron was unstoppable when he decided to leave the threes alone and drive to the hoop. He finished with 36 points, seven rebounds and nine assists and the only thing slowing him down was his inability to put two free throws together. In 15 attempts, he connected on 11, but it felt like he missed a free throw every time he went up to shoot a pair.

Wonder how the C’s fans felt without Eddie House to come into the game late and jack threes while Mo Williams nailed five of them for Cleveland?

It felt right to watch Leon Powe finish the game off by draining two free throws in his old home arena. So happy he is back and looking good.

Can’t believe how bad the Celtics have been at home this season. At least, when they’re playing teams other than the Raptors. If Shaq has to miss time with that sprained thumb –which was called “significant” on the TNT broadcast– perhaps it will become even more important for the Cavs to get Big Z back. I guess I should also keep in mind that the C’s were without Paul Pierce, kinda a big part of the equation, but wow, did they fall apart in the fourth.

In Indy, it looked like there were as many players as people in the stands by the end of it. While the Bucks controlled most of the way, the ending got a little interesting as Danny Granger was fouled behind the 3-point line with 10 seconds remaining. After he made just two of the three, the Bucks led by two and then Brandon Jennings made it four, hitting two free throws. With 1.5 seconds remaining, TJ Ford was fouled shooting a three, and made his first two foul shots, intentionally missing the third, trying to get the rebound and putback, but the Bucks grabbed the rebound as the clock sounded.

In Golden State, Steph Curry tried his best to keep his team into it, but the Nuggets were too good and too explosive down the stretch. JR Smith was huge, knocking down seven 3-pointers and finishing with 25 points off of the bench to go with the smattering of red stars on his neck, a new tattoo that was supposedly done over UStream and that made his neck look like it was bleeding. Just ask Jeff Green’s Twitter, he ageed.

The Nuggets were without head coach George Karl who missed the game due to chemo treatments as he battles throat cancer. Thoughts continue to be with him.

Curry finished with 30 points on 10-for-19 shooting go to with seven rebounds and 13 assists. Just two turnovers to go with two steals and a blocked shot, too. He was awesome. I was going to go to bed early because I’ve been feeling a cold coming on, but dammit, kid’s too good to turn away from.

Speaking of good, Chauncey Billups led the way for Denver with 37 points, six rebounds and nine assists. Melo added 27, Ty Lawson scored 12 off of the bench, and well, we already discussed JR. Nuggets just have so many weapons.

Something I appreciated: Rookie Steph Curry on the bench after being taken out of the game in the final minutes as the Nuggets took the game, cheering on teammate Anthony Morrow as he scores a meaningless layup. He gets it. This may not be a winning season, but it’s been a learning one for Curry and he’s taken every challenge, knock and lesson with stride.

And while some Raps fans will be pumped if Shaq is out of the game, JJ Hickson scares me quite a bit, too. Amir Johnson is used to being able to out-hustle and out-energy the other reserves, with Andy V and Hickson, he’s going to have his hands full. He’s also going to have to work very hard not to pick up 800 trillion person fouls.

Okay, bedtime for me as the wind is blowing like mad outside and there’s a whole lot of snow out there. Brrr!