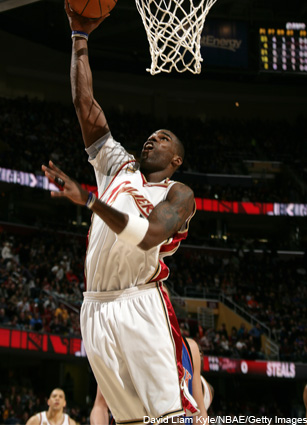 Please, please, please tell me you all saw LeBron’s alley-oop slam against the Knicks last night. It was another one of those, “oh my, oh, oh my, he’s flying,” moments and it was just really pretty. As pretty as something that damn ferocious can be. My favorite part was Bron’s reaction after he saw the replay. He couldn’t help but smile when he saw how close to the rim he was. Someone on Twitter told me he was obnoxious because of that reaction. To that I say, I’d rather be called obnoxious by someone who will never be able to dunk like that in their life than not be able to enjoy getting paid millions to play a game that I’ve loved my entire life.

In other words, lighten up. Don’t be a hater. Enjoy greatness when you get it. I know I am.

Anyway, the Cavs won in a laugher, dismantling the Knicks 124-93. Bron had 22 points, seven boards and seven assists, Mo Williams scored just seven points but had 10 assists and Antawn Jamison continues to get used to his new team, finishing with 17 points and 12 rebounds. Bill Walker led the Knicks with 21 points. Bet you didn’t think I was going to say that. Tracy McGrady played had six points and David Lee had a quiet 10/10.

With the Clippers up 10 against the Jazz with two minutes and change to go, Kelly Dwyer retweeted this: Memo Okur missed a three a moment ago and he is now 4 of 28 from three in 4th Quarter this season.

Despite a scare late, the Clippers were able to hold on for the 108-104 victory. Baron had 19 points and 12 assists as all five Clippers starters finished in double figures. Davis also was just one turnover shy of the bad kind of triple-double.

As someone who gets to go to Raptors practice on Wednesday and talk to the guys about this two-game road trip with back-to-back blowout losses, a four-game losing streak and what the hell happened to playing defense of any kind, last night’s 116-92 loss to the Rockets was painful. Really, really painful. With Andrea Bargnani coming in at a -29 and Patrick O’Bryant recording a +6, it was that kind of game. By the end, I didn’t want to watch, but knew I had to. The Rockets shot 51 percent and had 33 assists on 41 made field goals. Aaron Brooks and Kevin Martin had a field day, with Brooks scoring 28 points on 11-for-16 shooting, and Martin scoring his 28 on 9-for-18 from the floor. The Rockets his 13 3-pointers, shooting 52 percent beyond the arc.

It was ugly and ugly early as Toronto trailed by 20 at the half. Chris Bosh, I hope that ankle’s healed because your team needs you.

The Magic rolled to a 126-105 win over the Sixers, topping 33 points in all but the fourth quarter. They shot 58 percent for the game and hit 15 3-pointers out of their 23 attempts. Yes, 66 percent from deep. Hot like fire. Matt Barnes continues to show how huge he’s been as a pick up for Orlando, scoring 16 points and hitting three 3-pointers. Jameer Nelson had 22 points and 10 assists and Vince Carter added 19. Rookie Jrue Holiday had a career-high 23 points for the Sixers in the loss.

New out of Philly sounds like Allen Iverson may be stepping away from the game to be with his young daughter who is battling illness. Whether or not this is true –and I can’t yet put into words my thoughts/emotions on this if it is– my thoughts, prayers and well wishes go out to the Iverson family as they continue to deal with one of the hardest things any family has to deal with.

27 and 13 from Dirk, 22 from Caron and the Mavs got another victory, taking down the Bobcats 89-84 to get their eighth in a row. Hated hearing Stephen Jackson say that the Bobcats played scared. That’s not how it’s supposed to be. At all.

The Spurs won on the second night of a back-to-back, taking down the Hornets, 106-92. George Hill had 23 points, Tim Duncan scored 22 and Tony Parker added 18. The story here –for me, at least– is Hornets rookie Marcus Thornton pouring in 30 points on 12-for-19 shooting. The Western Conference rookie of the month, Darren Collison, added 10 points and 15 assists in the loss.

What in the heck are the Hornets going to do with their pg situation this summer? Surely they can’t keep Collison stifled on the bench behind Chris Paul. And, CP3, well, he’s as good as it gets. It’ll be interesting.

The Hawks took down a Chicago team that struggled as Derrick Rose tried to shake off a knee injury, falling 116-92. Josh Smith was sensational for Atlanta, finishing with 17 points, 18 rebounds, four assists, two steals and two blocks. Al Horford had 15 points and 10 rebounds and Marvin Williams added 18 points. I’m going to add my plea for the Hawks to go to Josh and Al on the offensive end more. Sometimes, as much as I enjoy Joe and Jamal, I’d prefer to see their other guys get some open shots, sometimes, the easy shot.

Okay, sorry for bringing up the Hornets rookie love again, but they’ve just bee so huge in the last little stretch. It’s awesome seeing guys who didn’t have a lot of hype around them when the seasons started break out and make everyone start paying attention. Kind of like… Zach Randolph. I definitely didn’t see that one coming.